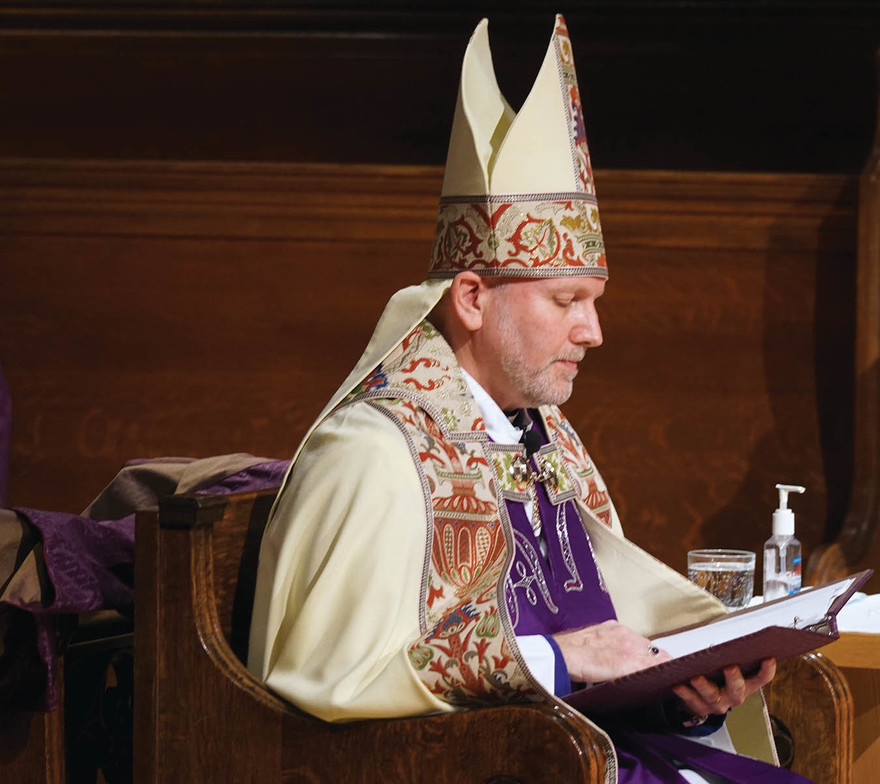 Bishop John grew up in what is now known as the Lower Mainland in this the South-West corner of the mainland of British Columbia.  He grew up on the traditional and ancestral lands of the Musqueam People of the Coast Salish Peoples.

Bishop John mostly attended two churches in those formational years, St. Philip’s and St. Mary’s, Kerrisdale.  After attending UBC to earn an undergraduate degree in Science, focussing mostly on Zoology and Evolution, he studied Theology further afield.  Graduating from the College of Emmanuel and St. Chad in Saskatoon, +John’s first parish was in the Diocese of Huron in south-western Ontario.  This was what was known as a three-point parish, three churches making up one parish in the communities of Florence, Bothwell and Aughrim.  A rural area of Ontario centred mostly around agriculture.

Bishop John is married to Ruth and they have two adult children; both of whom were born not long after the Stephens moved to the town of Squamish.  +John assumed the role of Rector of St. John the Divine in Squamish in 1995.  During that time the parish built a new church building to accommodate the growth and development of the parish.

They moved to St. Philip’s, Dunbar in 2001 as +John was appointed to be the Rector there to bring new vision, stability, growth and stronger sense of community.  This was accomplished in a variety of ways, not least of all was the commitment to liturgy, preaching, parish visiting and pastoral care.  During this time +John was appointed to be an Archdeacon of the Diocese and served on numerous committees and task forces.

In 2016, Bishop John was appointed to be Rector of St. John’s Shaughnessy to help to bring new growth, new vision and new purpose to this fairly recent restart of the parish.   Once more the parish began to grow and develop and this renewed life was gaining great momentum.

Bishop John was elected to be the Coadjutor Bishop of the Diocese of New Westminster on October 3, 2020.  He was consecrated a Bishop in the Church of God on January 23, 2021.  He was installed as the Bishop of the Diocese of New Westminster on February 28, 2021.  There will be many different areas of focus in Bishop John’s tenure but some of the ones that he names are: climate emergency, parish development, reconciliation, renewing the relationship between the Diocese and parishes, community building, new models for ministry, gender and racial equity, renewed connections between the Dioceses of our Ecclesiastical Province of BC and Yukon.

Bishop John is personable, enjoys being with people and loves to laugh. He has a strong background in pastoral care, parish development and Diocesan leadership. He is interested in people and their stories and their faith.  He loves the liturgy and the ethos of the Anglican Church and feels that we have enormous potential for growth and development. He and Ruth have a dog, Hastings who is often in the office during the week, mostly dozing through many of the Zoom meetings!

If you would like to speak to Bishop John or share something with him, he would be delighted to hear from you.

To download an 11x14 at 180 dpi image of the above photo for print please click the link.

Bishop John's two vested shots with crosier and his official headshot are downloadable below.