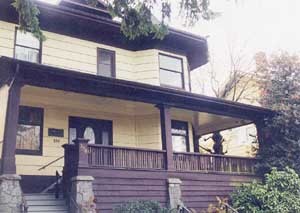 The End of an Era: Anglican Women’s Auxiliary Memorial House

By Cliff Caprani
(Published in the September, 2011 edition of Topic the monthly publication of the Diocese of New Westminster)

As you drive along 14th Avenue, near City Hall in Vancouver, it’s easy to miss Memorial House, the ACW’s headquarters since just after WWII. The handsome house, standing slightly above street level, is nearly 100 years old. A plaque to the left of the door is the only clue: Anglican WA Memorial House.

Tuesday 18th July was a significant day here, as the ladies of the ACW held their final meeting, prior to moving to new premises at 7012 Unit B Merritt Avenue in Burnaby.

Thirty five members of the ACW were in attendance. They helped with packing up the memorabilia, furniture & other items intended for the new, smaller digs. Anyone who has every moved house or downsized will appreciate the effort involved.

Sheila Puls, president of the Diocesan ACW, gave me a tour of the house. She explained that it had been purchased for a very low price in 1946, by a group of resourceful Anglican women. They had recognized the need for a location that would serve as both a headquarters for their work, and also provide accommodation for visiting missionary clergy, in town to raise money for their next trip.

The ground floor, with its elegant wraparound deck, has a small chapel (recently de-consecrated), a kitchen, and a large meeting/function room that runs from front to back. The upper floor, once used for priestly accommodations, is now where the caretaker lives.

Below stairs is the sorting area, where donated clothes, household linens & other items are tagged & baled prior to shipping to parishes in the north. I asked if parishes north of sixty are still in need of these kinds of things.
Sheila told me of a recent trip that she & her husband had made. In the Yukon to see the sights, they visited some of the parishes that receive ACW bales: Sheila was keen to see if these goods were still needed. In Atlin, whose parish is considered as part of The North, they were told that the ACW shipments are greatly appreciated, especially during winter, when trips to “nearby” Whitehorse entail a two hundred mile round trip on icy roads.

I wondered what would become of the house. According to Sheila, the purchaser plans to turn it into three apartments, and to add a coach house at the back. I asked why the house was being sold at all. Sheila said that the deck that I so admired had begun to sag, & that the cost of repairing it would be prohibitive.

I then joined the ladies for a delicious lunch, after which Sheila made a short speech. She thanked all members, past & present, for their work at Memorial House. She expressed sadness at having to move, but conceded that it was the fiscally responsible thing to do. Although it is cliché to say it, this meeting DID mark the end of an era, and signaled a move from genteel city surroundings to a more practical abode in the suburbs. The work, however, does not stop.

The following week, I visited their new Burnaby digs. Its not Mount Pleasant, to be sure, but it is admirably suited to their needs, with ample room for the tagging & sorting that is such a vital part of their mission.
I asked Sheila if there was anything that she wanted included in this article. She said that she wanted the wider Anglican congregation to know that the work is ongoing and still vital, and that they needed volunteers – “no experience necessary”. One morning a week – Monday – would be of great help. Oh, and the volunteers can be male or female.

The funds received for the sale of WA Memorial House have been invested to be utilised for the future ministry of the ACW. Outreach work continues from the new ACW Place at 7012B Merritt Avenue, Burnaby.