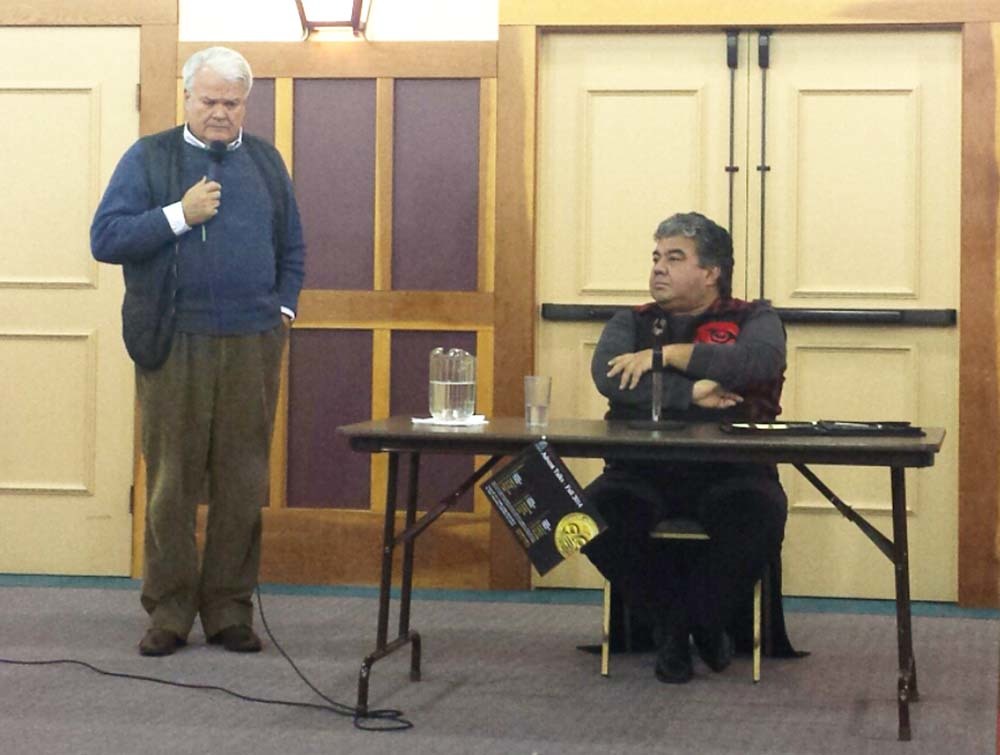 On December 16, members of St. Mary’s, Kerrisdale concluded their great work presenting a three part Advent Series, “Who is my neighbor” with First Nations speaker Miles Richardson, a citizen of the Haida Nation and of Canada.  He grew up on Haida Gwai and between 1984 and 1999 was President of the Council of the Haida Nation. He was appointed Interim Director of the recently established National Consortium for Indigenous Economic Development at the University of Victoria and also a Director of Canadians for a New Partnership, a non-profit organization formed in September which aims to tackle problems facing aboriginal Canadians.

These are notes reporting some of the open question period following Miles Richardson’s presentation. The engagement was lively, well thought out, respectful and engaging. Our great thanks to St Mary’s Kerrisdale and to Hope Sealy and her committee for helping to set these dialogue sessions up and to her great work of reporting the dialogue. Our hands are raised up to all who were part of this wonderful work.

The following is the section from the February 2015 TOPIC article that contains a summary of Miles Richardson’s presentation, I have included this to help put the “open question” notes in context. This content was compiled and submitted to TOPIC by St.Mary’s, parishioner, Hope Sealey, ODNW

Mr. Richardson started by saying that “some basic decisions need to be made. With focus we can get there if our hearts are in the right place.” He shared that “I am a Haida citizen and a citizen of Canada. This combination has not always been comfortable. One thing that has driven me, is to find full expression of my potential as a Haida in Canada. As Canadians, we say we are members of a democracy governed by the rule of law. We say we are a fair, respectful and compassionate people.  We say we respect the place in or on which we live. Had Canada lived up to those precepts we would not be in this present situation.  As a Haida citizen, and as a citizen of Canada, I am not a threat to Canada.”

Mr. Richardson answered the question of “How did we get here?” He started by sharing a very informative history lesson. He said, “In Phase One it started with the Royal Proclamation of 1763, and moved to the treaty making which then proceeded west.  However, when the government treaty process reached the Rocky Mountains, the crown rethought things, rethought that approach and that re-thinking ushered in Phase Two.

In 1867, all the rights of First Nations people were denied.  The aim became one of absorption and assimilation with the ideal outcome to turn First Nations into brown little white men with the instrument called the Indian Act. First Nations kept repeating calls for the rule of law to be established within which the matter or title could be dealt with but instead, they gave us reserves not title. In the early 1970’s, the Calder case proceeded to the Supreme Court, which ruled that it was legal fiction to say that original title had been extinguished.  The court was split in terms of their final decision, but Pierre Trudeau, who was then PM acknowledged that First Nations had rights, and thus began the third phase.

Phase Three had its attention focussed on the crown’s fiduciary obligation, having alienated title then, in the Delgamuuk case, whereby Justice Allan McEachern initially rejected the claim of the Gitskan and Wet’suwet’en to Aboriginal title over their traditional lands in northern B.C.  However, the Supreme Court overthrew his decision, arguing that oral tradition had not been given sufficient weight.  Oral history, said the court, must be considered as a repository of historical knowledge for a culture. Most recently, the T’silhquot’in won a decision declaring that they hold title to 1400 square miles. They are currently getting ready to negotiate based on this court decision.”

He asked, “What should be our aim?” He answered by saying that “First Nations have the same legislative standing as the provincial or federal governments and that the way forward is for Canada’s federal government to abandon its denial of Aboriginal entitlement, its efforts to assimilate First Nations people and that their new policy should recognize First Nations as nations, whose people have a special relationship to place. With that basis established, we would work to reconcile titles. We need to hear each other’s stories. We have to talk about we.”

Miles Richardson – Fallible Notes from his address – “Who is my neighbour”.

At the conclusion of Miles’s address he called on Tony Knox (a parishioner of St. Mary’s, who had also been lawyer for the Haida) to speak. Knox made a number of statements:

Miles was then asked if what he had been talking about was a repudiation of the doctrine of “discovery”.  He answered by saying, “Yes it is. We are human beings worthy of having rights. We must commit to reconciliation. He reflected back to those First Nations who have treaties. He’s spoken with them. They are not asking for the treaties to be torn up.”

Miles answered saying, “There is no way forward with us acting together. We are different people.  There is as much difference between a Haida and a Cree as between an Englishman and a Pole. For example, the Haida constitution is based only on Haida’s own history, own customs etc. We speak different languages. Many of us do not understand the language of the other. We have different customs. At negotiations, the sort of programming that we would be speaking about would differ from First Nation to First Nation. It is a fiction to lump us all together and think that we can have a common negotiation.  It’s a fiction to try to show that assimilation has worked.”

The Reverend Ian McKenzie who has spent much of his vocation in ministry to First Nations and reconciliation contributed by saying, “Reconciliation could be facilitated by our joint care of the land.”

The question was also asked, “Are we hosts/guests or neighbours? Recognizing that the first has a hierarchical colour and the second speaks to equality.”

Miles answered this question by sharing the following: “pre- reconciliation the metaphor is rightly host/guest. We’ve been trying to remind them (both federal and provincial governments) of their own laws. No one is listening. Haida Gwai was drawing up a detailed land use plan when I was their chief (a long time ago), a plan authorized by our own government. In 2010, the same plan was finally accepted by the provincial government, which recognized the land as Haida Gwai not the Queen Charlottes (Islands).  The people of Haida Gwai were happier about that than they were about the government’s final acceptance of the land use plan. The sadness about the delay, and that our kids are wasting along the way, they have no hope.”

There was a question addressing the subject that was on a number of minds, “What we can do as individuals?"

He then related this story, “This story from Haida Gwai is of a commercial group who digging at their work found two bodies, and put them in boxes and deposited them at the Band’s Office.  They were told that this was an outrage, not the way that bodies should be treated. The group then asked how they could show that they were sorry, that they wished reconciliation. On being told that the custom would be for them to throw a banquet, they did just that and did it magnificently – super meal, they made hand crafted gifts, and went all out to show that they wished to be reconciled.  It worked.”

Miles told of the time he renounced Canadian citizenship. He was leading the Haida team in a case being heard by Justice McEachern, concerning Haida resistance to some logging on Haida Gwai. The Justice said to him that, “as a Canadian citizen you have no right to face off against logging people”. As a result, 15 of the Haida group renounced their Canadian citizenship. The Haida people supported them, even though some thought it was not the right thing to do. Miles met with his grandfather who said to him, “remember this, we are the first Canadians”.

Someone asked Miles, “Why should I care”.  He answered that this is something that all of us should ask ourselves and consider.

In answer to a question as to the hierarchy of First Nations organizations, such as the Assembly of First Nations, he described this body as one that represented the Chiefs of reserves, and as something of a colonial mechanism. It has no responsibilities to the First Nations people, only to the federal government. The AFN, he said, is a lobby mechanism elected by the chiefs. The proper way for governments to proceed is to engage with the different First Nations.

A comment from the floor stated that; “The first step has to be the abolishment of the Indian Act.  It set up the department of Indian affairs or whatever it’s now called, and this arcane institution has no intention of doing away with itself, but rather with perpetuating itself.”