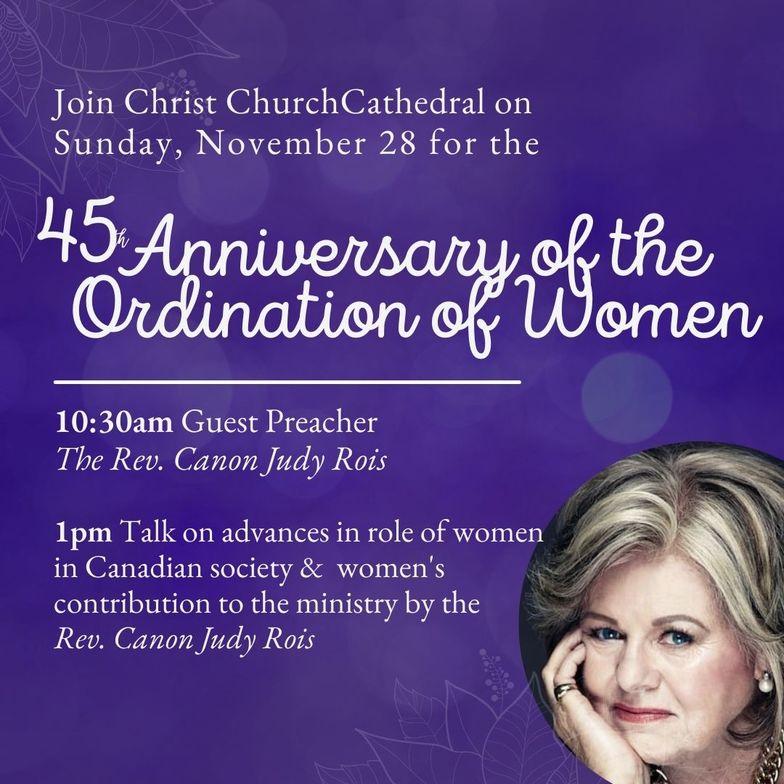 Christ Church Cathedral is pleased to welcome the Rev. Judy Rois as part of the Cathedral’s celebration of the 45th anniversary of the ordination of women priests in the Anglican Church of Canada.

The Rev. Canon Rois will be the guest preacher at the Cathedral’s 10:30am Choral Eucharist.

Following the service, at 1pm she will give a talk exploring the key advancements in Canadian society and politics that advanced the role of women. Her talk will also explore how women have contributed to the mission and ministry of the Church.

The 10:30am service takes place in person and is also live streamed at thecathedral.ca/live

The talk following the service will take place in-person and will be live streamed at thecathedral.ca/live. Register below to attend the talk in person.

About the Rev.  Canon Judy Rois

Ordained in 1985 The Rev. Judy Rois was the first female Vicar of St. James’ Cathedral in Toronto. Born and raised in Calgary, Alberta, Judy moved to Toronto as a teenager. She earned a Master of Divinity degree from Wycliffe College in Toronto and a Master of Theology degree from Trinity College, Toronto. She was ordained in 1985 in the Diocese of Toronto and served three parishes as Rector and was the first female Vicar of St. James’ Cathedral in Toronto. After earning a Doctor of Ministry degree in Homiletics in Chicago, Judy was appointed the George Snell Lecturer in Homiletics at Trinity College in Toronto and lecturer at Queen’s College at Memorial University in St. John’s, Newfoundland. After 26 years in full-time parish ministry, Judy was named Executive Director of the Anglican Foundation of Canada. Over the course of 11 years, Judy travelled to every province and territory in Canada as the Foundation’s emissary, and she oversaw over 6 million dollars in grants to support ministry and mission in Canada.

She is the author of a number of academic papers, one of which received international attention at the University of Oxford Roundtable in the UK. She has also written two books of prayers for children, a book on generosity for young people, and more recently, prayers during a pandemic.