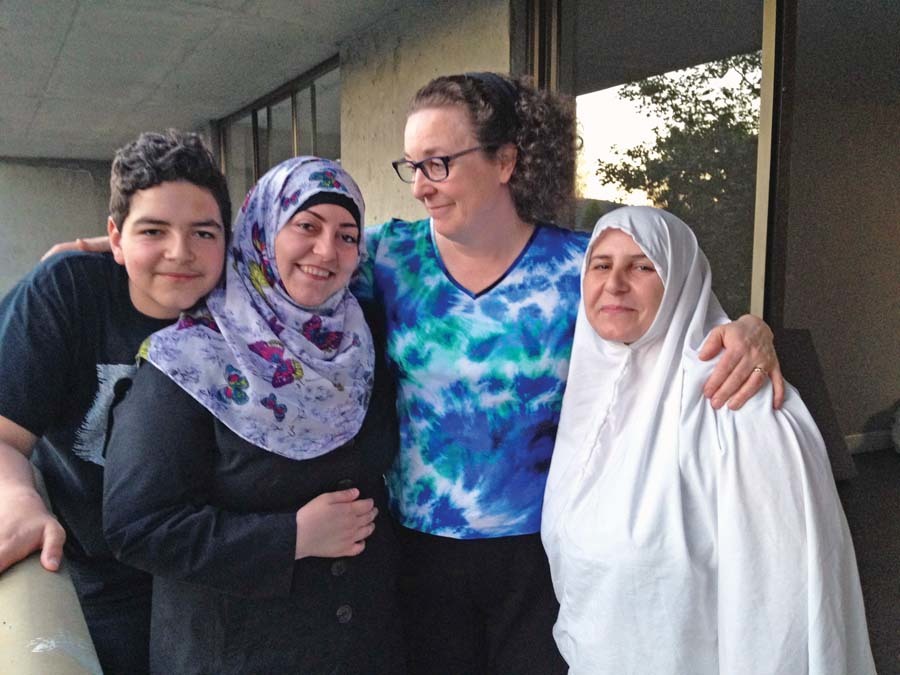 The scope of the Syrian refugee crisis remains staggering. The Syrian civil war has created at least 4.8 million refugees and displaced 6.6 million people within Syria (Source: UNHCR: The UN Refugee Agency website). Some estimate that half the refugees created by this conflict are children. Sadly, Syria is only one country where civil war, unstable governments, and human rights abuses have created millions of refugees. The UN Refugee Agency estimates that 60 million people are displaced around the world.

As Christians, we are called to respond to all human suffering: to tend to the poor, the sick, the orphan, and those on the margins of society. And in particular, we are called to welcome the traveler and stranger: “For I was a stranger and you invited me in” (Matthew 25:35). This requires that we extend radical hospitality to the stranger in need, even – or especially – when it feels daunting or risky. As a church, one way we embody that hospitality through our work in refugee sponsorship.

Just as in the late 1970s and 1980s when many parishes responded to the needs of Vietnamese refugees, many in the Diocese of New Westminster have responded to the Syrian crisis over the last year.

Responses have included supporting the Bishop’s Fund for Refugee Resettlement or other fundraising campaigns; providing material and emotional support to refugees through partnerships with other groups such as MOSAIC, a community group specializing in helping newcomers to Canada in the greater Vancouver area; and applying to sponsor refugees.

More than fifteen of our parishes have participated in sponsoring refugees – either as a parish or as part of a group of parishes and ecumenical partners. Those sponsorships represent sixty-five individuals, including children. A number of parishes have sponsored more than one “family unit” – often to ensure extended family members are able to settle together in the Lower Mainland. In addition to working with our own parishes, the Diocese has also worked with outside groups who wish to sponsor refugees under our Sponsorship Agreement Holder status. Applications for two families are in process as part of a partnership with Temple Sholom in Vancouver. Twenty-four people have already arrived in Canada as of the end of 2016.

The Diocesan Refugee Unit (DRU) is available to meet with parishes who are interested in exploring ways to support refugees through sponsorship, partnering with others, and/or offering assistance to refugees already in the country. Shannon Muir is the Chair of the Unit and can be contacted through the Diocesan Refugee Coordinator: refugee@vancouver.anglican.ca

Launched at Christmastime in 2015, the Bishop’s Fund for Refugee Resettlement has raised over $67,000. The Fund is designed to assist refugees (primarily those being sponsored by parishes or groups under the Diocese’s Sponsorship Agreement Holder) with extraordinary costs. Parishes are responsible for the general sponsorship costs such as housing and daily living, but there are a number of additional costs which can arise: delayed dental care, essential mental health treatment, and other urgent needs. The Bishop has appointed a team to assist her in allocating the funds and communication with parishes actively sponsoring refugees is on-going. Contributions to the fund are still welcome with more than 40 refugees anticipated over 2017 and into 2018, the needs will continue to be significant.

Those wishing to contribute by credit card will find a "Give" button located at the top of each page (the header) of this website. And, here is a direct link to the website giving page. You also have the option to make your gift by texting DONW to 7797, and this same contribution link will be texted to you. Please click on the dropdown box beside the words "Giving Type".

Those wishing to make a contribution by cheque, may make out the cheque to The Diocese of New Westminster, noting that it is for the Bishop’s Fund for Refugee Resettlement and mail it to: 1410 Nanton Avenue, Vancouver BC V6H 2E2.

This article was prepared and submitted by the Diocesan Refugee Unit of the Diocese of New Westminster and will appear in a slightly different form in the February issue of Topic the publication of the diocese delivered as a section of the national publication, The Anglican Journal.