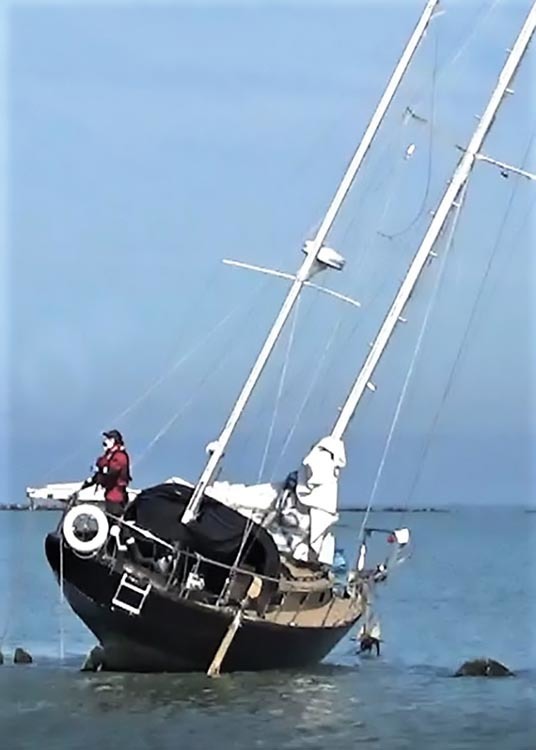 St. David parishioner John Horton, captain of the Canadian Lifeboat Institute’s Delta Lifeboat, hardly expected a recent Saturday morning training session to become a real-life rescue experience for his trainees. It began when crew sighted a stricken 33-ft sailing yacht aground on the rocks that form the Albion Jetty, one of two manmade structures built to control the water-flow at the Fraser River Estuary.

From late the previous night, the lone yachtsman’s vessel had been stranded on the Delta side of the Fraser River, south of Steveston and close to Westham Island. This area has trapped many vessels over the years and is one of the dangers that lurk in the Fraser River Estuary.

Captain John Horton made a quick check with the Joint Rescue Co-ordination Centre (JRCC) in Victoria and, as the incident had not been reported, the Lifeboat was tasked to investigate.

On approaching the yacht, the lone sailor advised the Lifeboat crew that he had been sailing from Victoria, but had no experience on the Fraser and no radio to call for assistance. Unfortunately, running hard aground at the height of the evening tide made it impossible to refloat the vessel until a full tide cycle of 24 hours.

Responding to an alert from Pacific Region’s JRCC, the Sea Island-based Canadian Coast Guard hovercraft Moytel, made swift passage to join Delta Lifeboat still standing by at the rescue location. The yacht was then boarded and inspected for damage. As it was not taking on water, and with a falling tide, plans were made to attempt to refloat the yacht on the next high tide at 10 o’clock that night.  It was agreed the Delta would return to the Albion Jetty location to tow the yacht free as the tide rose.  Finally, with only two inches of high tide left, the vessel slid off the rocks with no further apparent damage.

The yacht was then towed to Steveston and safely secured at 11:45pm, to the relief of a grateful yachtsman. The Delta Lifeboat returned to its Ladner station securing at 12:30am.

John is a celebrated marine artist and a recipient of The Order of British Columbia.