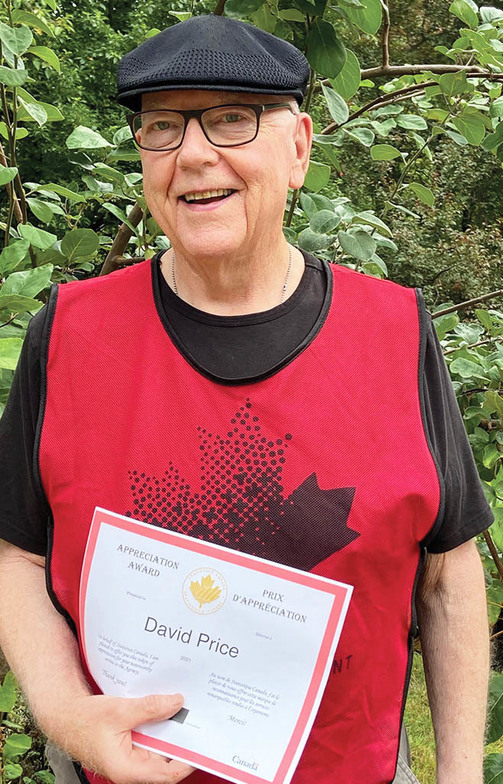 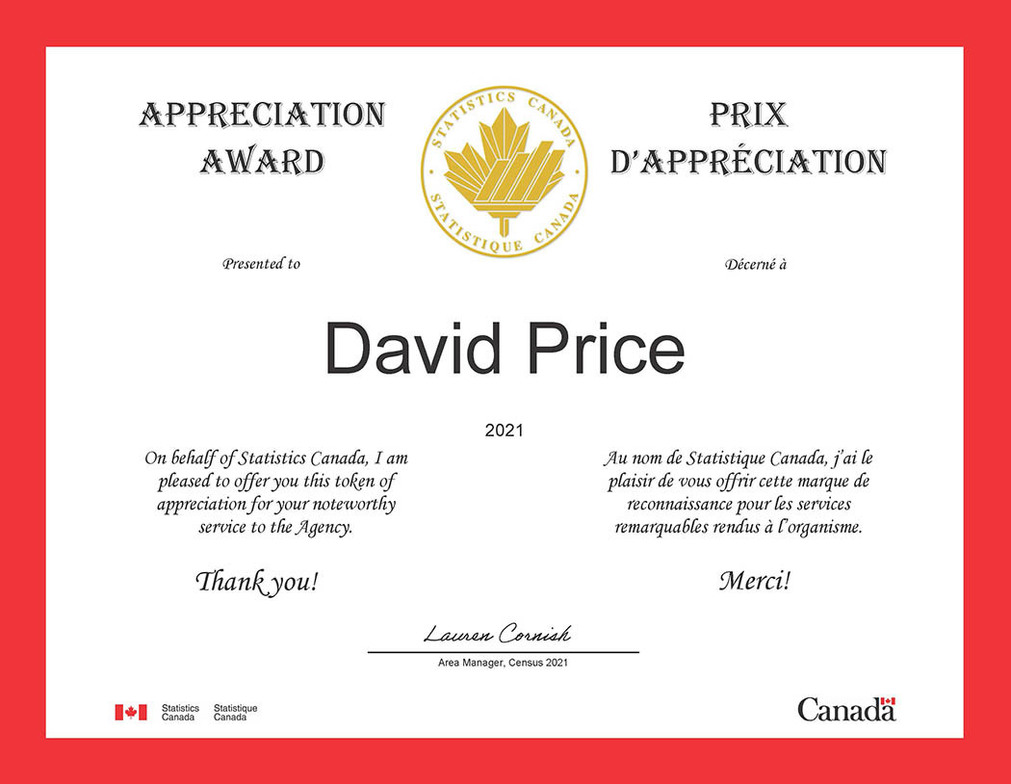 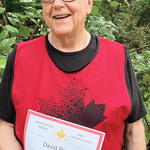 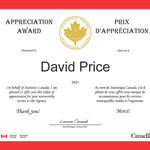 The Reverend Dave Price retired as Vicar of All Saints, Agassiz at the end of 2020, but in his own words he is “retired, but not retired from life.”

In May RevDave began working as an enumerator for this year’s census. He was motivated to contact a former colleague from Stats Can, Ms. Lauren Cornish when he’d heard from an Indigenous friend that the census process on reserves “was in difficulty and the leaders needed support.” As Dave had worked with Lauren in the past serving in the Yukon, he offered to assist her staff in learning about strategies to resist burnout. Dave was hired for the term of the census which concluded on July 31, 2021.

Here is the email to Dave which also contains the text of the nomination.

A belated thank you to you for working with our Census reserves group to help us through some very challenging times. I remember the time you had spent with our interviewer group prior to them going north to conduct a survey containing sensitive subject matter and I knew that you would be a good fit with our group.  As you were an existing employee at the time of the workshop, I'd nominated you for an Employee Appreciation Award.  I have also included the text of the nomination here for you to read. We were very fortunate that you were available to speak with us, and I am hoping that everyone in the group was able to take away ideas to help them in dealing with employee situations and more importantly help them with self-care. I have also attached the appreciation certificate! – normally presented in person, but alas, it is not to be in these times. In the next few days, you should also receive a Costco gift card in the mail.

Much thanks to you Dave.

Hope the rest of your summer is lovely (now that you no longer have census duties!)

Here is the nomination:

The BC reserve group has been struggling to conduct the census on the BC reserves during the pandemic. Many of the reserves were closed to the outside world and were not willing to having outsiders come into their communities to conduct enumeration. The reserves were then struck by a series of events, foremost among them being the disclosure of the finding of 215 children's bodies at the Kamloops Residential School.  Almost all of our team of Stat Act employees are indigenous, living in the reserve communities and this had a devastating effect on many of them, if not all. They were traumatized, many of them spiralling into depression and apathy.  Collection was shut down in many areas for most of June.

Our Field Operations Supervisors and the Field Operations Managers have been struggling under the weight of this myriad of extraordinary challenges to our employee team and our target communities, while at the same time trying to resolve the tension between being sensitive to the needs of the employees while still meeting the requirements of the census collection.  They have been forced to play a much greater emotionally supportive role with their individual employees and with the teams as a whole.  This is far outside of their normal prescribed duties and events have been taking a toll on everyone's mental and emotional health.

Dave has been working as a part time Stat Act general population Enumerator in the Abbotsford area. However, he is also a retired Anglican Church minister and a certified trauma therapist, with extensive experience with the National Residential School Survivors groups and with Truth and Reconciliation initiatives.  In conversations with one of the reserve FOMs, he heard of the struggles we were experiencing and he volunteered to lead a workshop with reserve supervisory team.

Dave met with the group on June 30 and led us through an enlightening and healing workshop. With his background, he was well placed to understand the struggles of the individuals within the group. We discussed empathy and healing and ways to support our employee group. He was able to draw on both his professional background and his enumerator experiences to illustrate ways of calming situations so they don't spiral out of control. He created a safe space where everyone felt free to share their experiences and gain a better understanding of their role during this very challenging time. We started with a discussion on some questions he had posed to us in advance of the workshop, and he then encouraged ongoing participation through his engaging empathetic manner. His exercises and examples on self-care and triggering REM in the brain were welcomed by everyone.

This was a very valuable experience for our group. It gave us all a new lease on the census, but at the same time reminding us of the importance of maintaining boundaries, and taking time for ourselves and our families. He also helped us more clearly recognize our limits in supporting employees who are needing help.

I would like to recommend Dave for this employee Appreciation Award. He was uniquely placed with his skills and his background to be able to lead us through this workshop and help us reenergize for the collection work ahead.