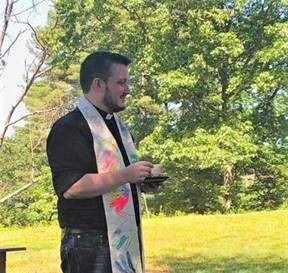 In May 2018, it was announced that St. Faith's rector, the Reverend Richard Leggett, would be moving to Holy Trinity Cathedral in New Westminster effective July 1 and would also be collated as Archdeacon of Westminster. The parish began the search for a new rector.  The first step, with the help of the parish, was to create a Parish Profile – a document that described the paris and especially described the ‘Rector we seek’.   After many surveys and meetings, and while the Venerable Stephanie Shepherd filled the role of Priest-in-Charge, followed by the Reverend Melanie Calabrigo in November 2019, this document was finalized and the job of Rector of St. Faith’s was posted by the Archbishop's/Executive Archdeacon's office in December 2019.

Applications were received in January and short listed, and applicants were interviewed by the search committee, but unfortunately this was not successful.  A reposting in the New Year resulted in the further process of short listing the applicants, interviews, this time via video-conferencing, and subsequent second interviews. Success!

The lay leadership of the Parish of St. Faith's are delighted to announce that Archbishop Melissa Skelton has appointed the Reverend Adam Yates, Rector of St. Faith’s Anglican Church effective September 1, 2020.

Originally from Virginia, Adam spent his childhood outside of Washington, DC with summer visits to the cabin his grandfather built in Ontario. He travelled a circuitous route that led him to St. Stephen’s Episcopal Church in Connecticut in the fall of 2012.

Attending Northland College in Wisconsin and obtaining degrees in environmental sciences and religion, Adam then went on to obtain his Master of Divinity from Chicago Theological Seminary. Raised in the United Methodist Church, during his religious studies Adam explored a variety of Christian traditions and found himself drawn to the liturgy of the Episcopal Church. He interned at an Episcopal Church in Chicago.

In addition to his part-time work at St. Stephen’s, Adam serves as the Secretary of Convention for the Episcopal Church in Connecticut, does consulting work with Episcopal churches in long-term transitions, and also serves on various diocesan councils, commissions and multi-parish networks including the Faith and Order Commission, the Climate & Environment Ministry Network and the Digital Ministry Network.

In discussing the church of the future, Adam believes it is a church that takes the Good News of Jesus out into the world.  “A church that proves its relevance not just by the words it says but also by the way it lives out and embodies those words in the world.”

Adam currently lives in Andover, CT with his husband, the Rev. Matthew Emery, Senior Pastor of Storrs Congregational Church, and their two pets, a cat named Demon and an energetic beagle named Daniel.

Adam enjoys going on hikes with Daniel, amateur astronomy, and watching bad sci-fi movies. In 2018, Adam cycled almost 900 miles through New England staying in church communities along the way.  He enjoys cooking and baking, and serves on the Board of Directors for the Westport Astronomical Society.  Other volunteer work has included working with the Andover Farmers’ Market and helping to organize events for the Local Prevention Council that works on drug-use prevention in the community, especially among teens.

On hearing the news of Archbishop Skelton's appointment he sent the following message to the people of St. Faith's:

"I am delighted to be joining you as your next rector. Over the past many months, I have started getting to know your community through your parish profile and through conversations with your search committee and wardens, and I am excited by the work you are doing in your community and in your interest to grow your ministry, especially in service of those who are lonely and isolated in Vancouver. Though these are unusual and uncertain times as we live through a global pandemic, I am eager to continue getting to know your parish and connecting with each of you in whatever way that the pandemic allows. As we start wrapping things up here in Connecticut and preparing for the move, my husband and I are looking forward to being with you soon."

An announcement regarding the date for a Celebration of a New Ministry will be distributed through the diocesan communications vehicles as that information becomes available.

Many thanks to Gillian McIntyre and the St. Faith's Search Committee for the preceding copy and for sharing his news.