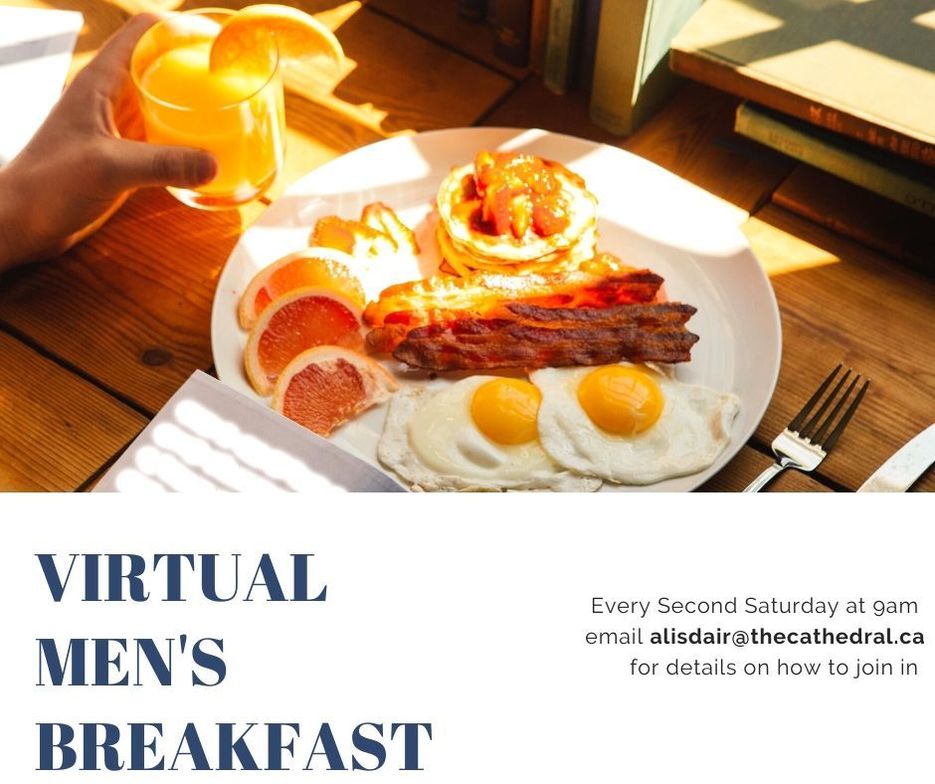 One thing seems to unite most men almost universally: an appetite for bacon (even non-meat bacon). So what happens when you’ve been using bacon as an excuse to bring a group of men together and suddenly you can’t do that anymore?

That’s the question the Cathedral’s Business Chaplain, the Rev. Alisdair Smith and the “squadron” who organize Men’s Breakfsts faced in mid-March. They had  been leveraging that appetite for bacon to bring the Cathedral’s male-identifying parishioners together for breakfast and some deep reflection on big themes in life. Covid-19 restrictions meant the breakfast scheduled for March 2020 couldn’t go ahead, so Alisdair and the “squadron” that coordinates the breakfasts simply moved the scheduled breakfast gathering on-line and hoped for the best.

They soon discovered that there is one thing that is more powerful than bacon when it comes to convincing men to come together and have deep conversation: the so called “man-cave”.

“This is an oversimplification, but in general men are not, as a gender, in this faith and time, literate about our emotions. Men are socialized to ‘suck it up’,” Alisdair says about the motivation for the Men’s Breakfasts.

Over time, inviting men to take part in subsequent breakfasts, trust has been built between the men who attend the breakfasts. This allows them to explore issues and ask themselves questions that force them to look at and name their emotions. When Alisdair and his squadron moved the breakfasts on-line there was some doubt as to whether the on-line format would work.

“A cool thing happened on Zoom” says Alisdair, the men started opening up more easily and diving deeper in the questions offered for reflection. Alisdair attributes this phenomenon to two factors: first, “I’m in my cave, I can do all sorts of things to keep me safe - mute my mic, turn off my camera. By being safe I’m more likely to be vulnerable.” Second, “up to 40 percent of the men already knew each other from previous breakfasts...this platform helped us deepend that trust.” He adds, “we’ve been able to move into deeper questions more quickly than face to face. Some participants have said the breakfasts are now a lifeboat for them”

The second unexpected side effect of moving the breakfasts on-line was that it suddenly allowed men who otherwise couldn’t show up in person to attend. Some men previously had conflicts with other family or social commitments on Saturday morning. Some men lived too far away. “My brother in Toronto has joined the breakfasts because now he can. In fact he’s become one of the new regulars,” says Alisdair. Friends from San Francisco and Waterloo, Ontario have also joined the virtual breakfasts.

Even with men joining the session from further afield, common themes have emerged in the group’s discussions: “loneliness and aloneness are big because we are a social species, and a a deep concern for others who we presume don’t have access to opportunities like this,” Alisdair says. He adds that the men in the group are generally quite aware that they have a certain level of privilege due to various socio-econimic factors. They realize that there is a companionship that comes out of the privilege they have, but they are concerned about those who don’t have the same privilege and they take part in ongoing discernment over what to do with the privilege they experience.

“The men are more interested in having a positive impact than just personal connection with others,” Alisdair explains. As a result of moving their sessions on-line, Men’s Breakfasts now take place every two weeks, on Saturday mornings. Men are invited to make their preferred breakfast, settle into their “cave” and join in Zoom meeting. “The general consensus is this is working,” says Alisdair. When restrictions are eventually lifted he says they may return to having in person gatherings 3 to 4 times a year “because we like bacon” but continuing with more frequent on-line sessions.

Alisdair sums up what he and his squadron have learned over the past four months saying, “who would have thought that Zoom would would increase emotional literacy?”