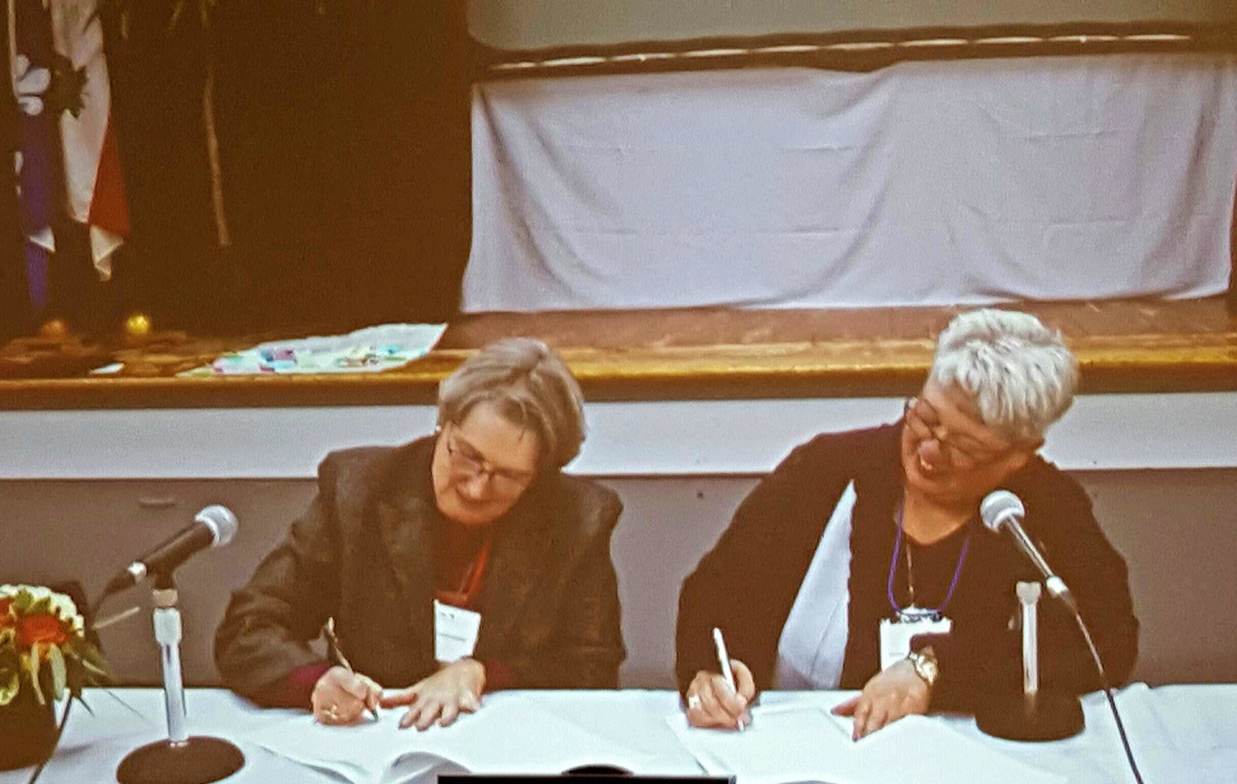 It was the end of a long afternoon session on Saturday July 9 at General Synod 2016 when the Primate called upon Bishop Fraser Lawton from the Diocese of Athabasca to address the General Synod about the recent forest fires in Fort McMurray Alberta. At the podium, Bishop Lawton spoke about how the Anglican community in Fort McMurray was affected by the fires; he expressed thanks to Bishop Jane Alexander of the Diocese of Edmonton for the immediate assistance that she and people of her dioceses provided to evacuees, making a church hall in Edmonton available as a meeting place.Anglicans from across Canada contributed financially to support those affected: the Primate’s World Relief and Development Fund made assistance immediately available. “It’s so good to be part of a wider family” Bishop Lawton said, and then introduced Jeremy Munn, a member of General Synod to tell his story. Mr. Munn addressed the General Synod, his voice thick with emotion. He and his young family are residents of Fort Mac: they were amongst the evacuees. He described how he stood in his house encouraging his young daughter to get in the car with his wife, their pets; he said, “I tried to figure out what I needed to take: I looked out; my family was in the car—and in that moment I knew that there was everything I needed.” Synod members applauded—many of us were in tears as he spoke of how residents of Fort Mac cared for each other, how they looked out for each other, how they perceived that God had brought them safely out of town, through the fire to safety and refuge. What this situation brought out in them, he said was a deep expression of compassion: “All of us acting like Christ to one another.”

It was the final presentation of the afternoon that had begun with stories about Anglicans in northern dioceses making partnerships with southern dioceses: the dioceses of Newfoundland made an arrangement with the diocese of Athabasca because so many workers in the oil industry in Alberta come from Newfoundland; the diocese of Montreal has a partnership arrangement with parishes in the former diocese of Cariboo in BC (soon to be known as the Territory of the People). These two along with others examples demonstrated how Anglicans across Canada seek to bridge the north-south divide in this vast land with practical ways of helping one another.

Greetings from the United Church of Canada were brought from their new moderator the Right Reverend Jordan Cantwell. She spoke movingly of the importance of working collaboratively with Anglicans to respond to the Calls to Action from the Truth and Reconciliation Commission. Greetings from the Anglican Communion were extended by the Secretary General, Archbishop Josiah Atkins Idowu-Fearon who spoke of how the Anglican Church of Canada provides leadership within the world wide Communion in many important ways: his report was followed by a presentation from the three Canadian members of the Anglican Consultative Council who described their experience at the Council meeting earlier this year in Lusaka, Zambia. The Reverend Dr. Richard LeSueur’s spoke from the Companions of Jerusalem, describing the complexity of life in the Middle East and encouraging Anglicans to support the work of the diocese of Jerusalem.

An evening session in Provincial Caucuses elected members of the Council of General Synod, the body that continues the work of our church nationally between the triennial meetings—Melanie Delva from New Westminster was elected.

Saturday morning was spent in “Neighbourhood Groups” of about 25 people, who had a facilitated conversation about the implications of whether or not the General Synod passes a resolution to amend the marriage canon to make marriage in the Anglican Church of Canada open to all eligible people—including same sex couples. I found it fascinating to hear the perspectives of people from across the country—a wide range of view points with (by my informal count) a majority in favour, but all deeply aware of the importance of the discussion. Conflicting view points from indigenous members and partners (many First Nations Anglicans are part of this General Synod as ‘partners’—not voting members but sitting with delegates and participating in conversations). While many expressed the pain of being sexually abused in residential schools, others spoke of ministering to urban aboriginal youth, many of whom identify with the LGBTQ community and are seeking to find ways to integrate their identities. The 2 hour conversation had numerous surprises for me as people spoke of their convictions and concerns: people that I would have thought would be supportive of equal marriage expressed reservations while others who looked to me like that would likely be opposed spoke compellingly of their support. It was a reminder to put aside assumptions and be open to the surprises that come when you truly listen to another.

At its best this General Synod is an occasion to put into practice what Jeremy Munn described in his experience of the evacuation from Fort McMurray: my prayer is that in this meeting, as in all of our life as the beloved of God we become a people where “All of us are acting as Christ to one another.”

Photo: signing of the partnership between the Diocese of Montreal and APCI