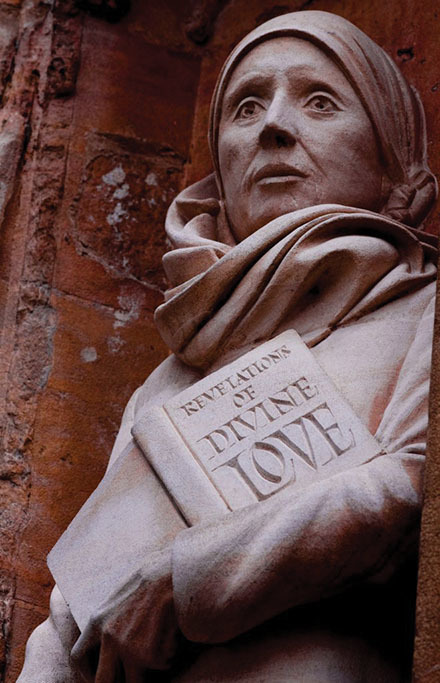 On the great west front of Norwich Cathedral there is the statue of a woman. The strong fined boned face would suggest that she is portrayed as in her forties. Her eyes gaze into the distance across the city in which she lived all her life. A simple cloth covers her hair . Round her neck and shoulders is draped a heavy layered scarf remarkably like those worn today.

Tucked under her left arm and held firmly in her hand is a book she herself wrote. It’s title “Revelations of Divine Love.”

It is the earliest surviving book in English written by a woman. Today the Christian world acknowledges its contents to be among the greatest treasures of the Faith.

Perhaps the term ”surviving” is well earned. Because the medieval church could not bring itself to officially acknowledge the gifts of a woman, the manuscript of the book was preserved by generations of Benedictine sisters. We owe these women an immense debt. Without their care of this manuscript it is possible that the Christian Faith might have lost the memory of one is among the greatest, if not the greatest, of Christian mystics.

Julian was six years old when the contagion that would come to be known as the Black Death would decimate her world. We know that Julian survived the virus as we have a mention of her conversing with her mother in her late twenties. About a decade later we know that she became what was in her time called an anchoress, a woman who lived alone in a church cell and was looked to as a source of wisdom and sanctity.

In May 1373 , then thirty, Julian contracted a life threatening illness. It may have been a recurrence of what we today would call a virus. In that century there were recurrences of plague. Whatever that health crisis was,it transformed Julian into the spiritual mystic she would become in her own time and indeed ever since.

All night long, as she tells us in her revelations, vision after vision of the crucified and risen Jesus came to her, fifteen visions in all, each one allowing her to converse with her Lord. The great gift she gave to future generations was to write the experiences of those extraordinary night hours, something quite unusual for a woman of her time.

Somewhere in her manuscript there is a passage that surfaced in the cultural turmoil of the sixties and served to reintroduce an almost forgotten Julian to the modern world. It’s an exchange between Julian and our Lord in which he shows her the outstretched palm of God’s hand in which she sees a hazel nut lying. Puzzled, Julian asks our Lord what the hazelnut means. He tells her that it is a symbol of everything God has created. In this Julian is to see three things of God’s Creation, that God is its Maker, its Lover and its Keeper.

That short exchange in Julian’s manuscript seemed to speak eloquently to a late 20th world that was becoming aware of the all important responsibility humanity bears to its own natural environment.

Those utterly simple words, promising a sublime hope for Creation and History, can be heard quoted again and again in our own deeply shadowed time of viral infection and it’s threatening consequences. We quote them because they promise a divine hope. We also owe a huge debt to a woman who, even though her life was surrounded by plague and fear, handed on that divine promise to future generations.

A final thought. There is a debt we owe that is all too easily forgotten, a debt to the treasures of Jewish wisdom. Somewhere in that great treasure house there is the remark of some sage about Moses and the Exodus Journey.  Moses, it is said, was not a person of fear. He did not fear the burdens of leadership, nor fear enemies nor the dangers of the wilderness. There was only one thing he feared, that the people would lose Hope. Then and only then would the great journey end.

So let’s join one another in remaining a people of Hope.