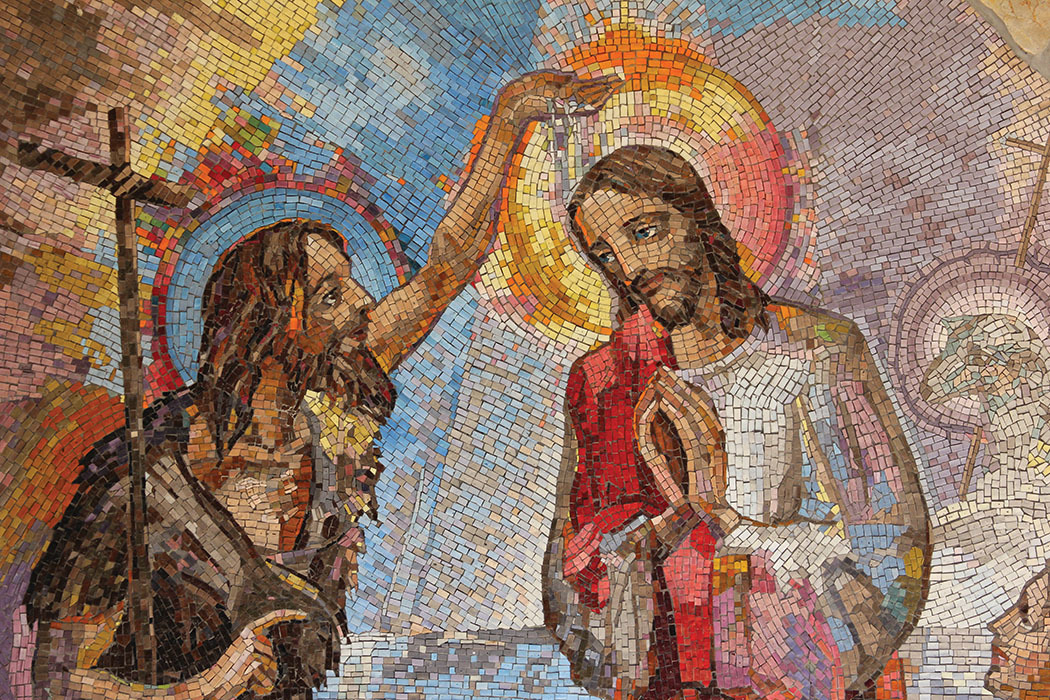 In the Gospels the ministry of Jesus begins once he is baptized by John. All four Gospels start their stories of Jesus with his baptism by John. And then the Baptism of Jesus seamlessly flows into the baptism of Christ-followers. Or does it?

It is striking how little is actually said about the baptism of Jesus followers in the Gospels. In Matthew the only water baptism mentioned is that of John the Baptist. That is, until the final lines of the Gospel, where Matthew writes, “Go therefore and make disciples of all nations, baptizing them in the name of the Father and of the Son and of the Holy Spirit…” If it wasn’t for this final verse, we would be debating whether Matthew thought baptism was a Christian rite, or something that only pertained to John’s ministry. If it wasn’t for this surprise ending, we might reasonably conclude that Matthew thought that baptism ended when Jesus got baptized. This final command not only tells us that baptism did not end with John for Matthew but was part of being a disciple of Jesus as well.

In Mark there is nothing said concerning water baptism after John’s ministry. Does Mark believe Christ followers need to be baptized in water? It is impossible to say!

The most reliable ancient manuscripts of Mark’s Gospel ends at 16:8. This was unsatisfying to some early readers and attempts were made to construct “better” endings. In one such ending (known as “the longer ending”) we find: “The one who believes and is baptized will be saved; but the one who does not believe will be condemned” (Mark 16:16). This supplements the narrative with the missing requirement of baptism, but again, it is not actually part of the original story. The longer ending makes baptism a requirement for salvation. This is pretty strong given the fact that this theme is entirely missing elsewhere in Mark’s Gospel. In the original story, the reader could not be sure what place water baptism does or does not have in the life of a Christ-follower.

Things are only a little different in Luke, but not because of anything in the Gospel itself. Rather, the Book of Acts, the sequel to the Gospel of Luke, mentions water baptism regularly. We learn from Acts that the Baptism of John persisted well into the time of emerging Christianity. John’s Baptism was understood to be different and ultimately insufficient from the perspective of the Christ-followers, even while it was understood as a legitimate move towards a closer relationship with God (See 18:25, 19:3-5).

“Peter said to them, ‘Repent, and be baptized every one of you in the name of Jesus Christ so that your sins may be forgiven; and you will receive the gift of the Holy Spirit’” (Acts 2:38).

At the risk of over-simplifying things, I believe this verse captures in a nutshell the most important aspects of water baptism in Luke-Acts. The first thing to notice is that it is a command. The issue of baptism comes as a forceful imperative. Do this! While this might not seem surprising, it is interesting by way of contrast to note that baptism in Matthew and Matthew (and Luke for that matter) are not commands. Grammatically, the words in both Matthew 28:19 and Mark 16:16 are participles, and hence do not carry the force of the imperative. But, in Acts baptism is a demand.

Another thing Acts 2:38 reveals is that the word is passive. One is baptized. To receive this rite, then, one requires another. On cannot baptize oneself. It is a rite of a community that brings one into relationship with that community, and requires outside agency – that is, someone else.

It is also informative what baptism is closely associated with in Acts 2:38. There are at least three things:

Repentance denotes a fundamental change in direction, and forgiveness is a divine response to this change. Both of these elements were important defining elements of the baptism of John the Baptist. So, for Luke, the baptism Christ-followers builds upon, and is an extension of John’s baptism. However, the fact that Christ-followers are baptized “into the name of Jesus” clearly differentiates this baptism from the baptism of John. One bridge between the older baptism of John and the newer baptism into Jesus comes with the association of the gift of the holy spirit and baptism. In Luke’s Gospel (as well as in Matthew’s and Mark’s) Jesus received the holy spirit when he was baptized. While the text does not actually say that the others who were baptized by John did not receive the holy spirit, the fact that John said “I baptize you with water; but one who is more powerful than I is coming… he will baptize you with the Holy Spirit …” (Luke 3:16) suggests that they did not. In any event, repentance, the name of Jesus, forgiveness, and the holy spirit are all closely associated. There is a surprising degree of variability in Acts as to how all of these things relate to each other, suggesting that Luke was not slavishly following a set dogma.

John’s Gospel is the only Gospel that seems to suggest that anyone who decided to follow Jesus would undergo this rite during his earthly ministry (see 3:22-26). John’s Gospel states that Jesus himself did not baptize anyone. Rather, he left that job to his disciples (4:1-2). In John, the Christ-follower’s baptism is related to initiation and discipleship (4:1).

While water baptism is traditionally understood as a rite of initiation, Paul does not emphasize this fact. It is interesting that in Galatians he does not compare circumcision with baptism. There is little about the rite that for Paul is explicitly about initiation. It embodies the entire life of the Christ follower, and so by extension, it is a sort of initiation rite for Paul, but he never emphasises this fact.

It is interesting that Paul never mentions Jesus’ baptism and never mentions John the Baptist. Did Paul not know about these things, or did he just not care? We’ll never know for sure. In any event, John’s baptism and the Baptism of Jesus play no role in Paul thoughts concerning this rite. We are not baptized because Jesus was baptized. Or if we are, this was not an important enough thing for Paul to mention.

Paul’s view of Baptism stands in tension with Luke’s view. For Luke, baptism was a command – something to express as an imperative – not so for Paul! Paul never exhorts anyone to be baptized. He often presumes baptism, and draws implications, but does not tell anyone that they should be baptized.

The key that unlocks Paul’s theology is in the idea of participating with Christ. This idea is frequently spoken of as being “in Christ.” Everything hangs on this for Paul. It is the centre of his often-bewildering theological world. Baptism in Paul is all about this participation. Instead of repentance and forgiveness, baptism is participating in the death and resurrection of Christ (Rom 6:3-4). To be baptized is to put on Christ as one might out on clothing (Gal 3:27). It is to be taken up into the divine eschatological plan that has been established “in Christ.” To receive baptism is to participate in a new collective identity that transcends ethnicity, social status, or gender (Gal 3:28).

The last perspective on baptism in this whirlwind survey of the New Testament is 1 Peter. This author (commonly though by scholars to not be the Apostle) does something surprising with baptism.

“God waited patiently in the days of Noah, during the building of the ark, in which a few, that is, eight persons, were saved through water. And baptism, which this prefigured, now saves you —not as a removal of dirt from the body, but as an appeal to God for a good conscience, through the resurrection of Jesus Christ …” (1 Peter 3:20b-21)

Connecting baptism and the flood is startling. It makes me wonder if perhaps “Peter” is overloading baptism as a rite? That is, is he trying to get it to do/mean too much? Presumably the water of the flood suggested itself to “Peter” as something that explains baptism. But this leaves us with a shocking vision of baptism as apocalyptic/cosmic destruction. In any event, it is an interesting counterpoint to what we find in the Gospels and in Paul.

Drawing things to a close, I think it is helpful to notice the variety of perspectives on baptism in the New Testament. How often we desire to reduce things down to a singularity. What sort theological monstrosity would we get if we were to really try to add all these differing perspectives together in an attempt to create a single “biblical perspective.” Against this tendency, I would suggest that we see the plurality of perspectives in the New Testament concerning baptism (or whatever) not as ideas to add together in an attempt to create a new globally inclusive harmonized perspective, but rather, as differing views simply to be left as discrete alternatives.

Mosaic of the baptism of Jesus Christ by Saint John the Baptist as the first Luminous mystery located in Medjugorje, Bosnia and Herzegovina. ID: 606001084 Photo: A J Figel