Justice and only justice you shall pursue 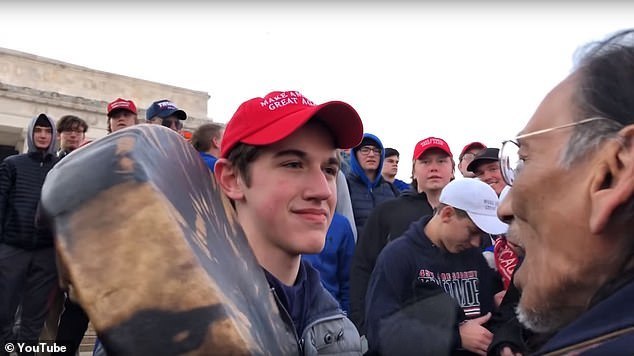 At what point does courage become foolishness? Paul says he would rather be foolish! I wrote this homily and preached it twice, first at a liturgy January 24 for the Week of Prayer for Christian Unity, at which there were people from across a number of denominations, and on Sunday, January 27 at Christ Church in Hope BC.

At both services the sermon had wide reactions, including reactions from those who objected to it strongly. Some felt it had no business being preached from a pulpit as it was both political and discriminatory.

New and varied information (not to mention a number of different interpretations) from the many videos taken of the moment with the boy from Covington Catholic School may exonerate the boy in the red MAGA hat, but that does not reduce the symbolic image of his age, his face, his hat, his demeanor, his Christian faith, all confronting an Indigenous Elder drumming. I stand by my sermon. It is about a much broader picture of abuse, racism, and economic and practical enslavement, not only in America, but in Canada too.

The program for the Week of Prayer for Christian Unity laid out the talks for each night. The overall theme was from Deuteronomy 16:18-20. "Justice and only Justice You Shall Pursue."

As I look out, I see lots of grey hair, including my own. We've all heard comfortable, predictable sermons on being content and not worrying about tomorrow.

I am going to preach against being even the least little bit comfortable. We should not be content. It is anti-Gospel to be content. The Gospel points the finger, destroys comfort, causes uneasiness, and turns our eyes away from the gaze of Jesus, in avoidance.

It's because we are privileged, and we don't want to deal with it. Others have to deal with our privilege, because of their colour or race or some other so-called fault. But we established Christians are the ones who seem to know what God wants.

This week there was a big to-do about a boy from a religious school who stood directly in front of an  Indigenous Elder who was drumming and singing. The photos are all over the internet. The boy's parents hired a Public Relations firm to manage the fallout. On a talk show, the boy made excuses and explained how he got there, to the place where numerous protests were taking place, and how he was just trying to diffuse some situations going on. "I am a nice boy," he wanted us to think. White people generally avoid taking the blame.

In the photo the boy is so white, his red Make America Great Again hat is so big, and it looks like he is smirking. He is seen in a challenging posture.

Our faith has lost its way the minute it becomes content with what it has. We are at our best when we are embroiled up to the elbows in controversy, when we are listening to society and what people are saying, and we are in the midst of it, finding the truth.

Jesus spent an awful lot of time with those who were in trouble, the sick, the lonely, the outcast, and so should we. In the pleas of the homeless and the poor, in the dispossessed, the indigenous and the immigrant, in the sick and the lonely and the elderly, in Mother Earth - we will hear the voice of God.

If there was a problem with the image of the boy with the red hat, it was his naiveté . He had no clue. He was imported with his male classmates to support a women's pro-life march. I am not sure why a bunch of teenage boys would be protesting something like that - it was inappropriate for a bunch of boys.  Boys are the benefactors of pro-life and no birth control, they get to father babies.

The red hat had no clue either about the Indigenous Elder he stood in front of and seemed to stare down. How dare he! He seemed to have no grip on how Indigenous peoples have been treated in both Canada and the USA. He had no idea of the inter-generational trauma experienced, the broken promises, the abandoned treaties, the theft of ancestral lands, the church's harsh destruction of Indigenous languages and beliefs and so on. He seemed to have no idea how many aboriginal persons and people of colour have been killed over the years by white people.

We should not be content with who we are. No, we should educate ourselves. We should kneel broken- hearted before our Saviour for what our ancestors have done, and what we have done. We have benefited, living privileged lives on land that was never ceded to us. We should read about the Doctrine of Discovery, which gave Europe license to subjugate and convert any nation that was not Christian. We should find out about colonialism, the invasion of most the world by Christianity and European power.

Colonialism is alive and well in Canada, and our First Nations struggle to deal with it every day. It should humble us, even terrify us, to know that. We should decry the Indian Act and how it holds people back from prospering, and how it seeks to "manage" aboriginal people. If we want to understand the rise of these protests, we should read deeper and see what our ancestors did and we have perpetuated.

It is my conviction that the Church has always been called to go forward in the name of truth, justice and inclusion. It is wrong to be content with what we have, as if it's all ours.

It is right to have ears to hear, and eyes to see, and to embrace the world as Jesus embraced the world. His enemies accused him of eating with outcasts and sinners. Be accused of the same by taking up the cause of God and joining the cause of the downtrodden!

I do not think that the kid in the Make America Great Again hat, and the private school uniform, and the wealth understood what it looked like. He (apparently unintentionally - my later edit) represented in one poster worthy moment an aloof and hardened religious person who had no understanding or compassion for the aboriginal drummer.

Our generation have followed too closely an old and deceiving story that goes back hundreds of years, a story of conquest and booty, of crushing our enemies underfoot, of gross smugness, of white supremacy and Christian insensitivity.

The devil has upped his game. He knows his time is short (you can find that in the bible, Revelation 12:12). But I believe God's Spirit has also upped her game. She has much to say to us. The full breadth of the Gospel is inclusive, free and unwalled.

Perhaps like the boy in the red hat, we have no real idea either! But I think we are here today because God is moving powerfully among us. It is time we began getting into trouble, in our generation, the way Jesus got into trouble in his day.

Jesus says, "Strive first for the kingdom of God and his righteousness." (Matthew 6:33) I pray our ears be open, and our eyes see, and that we understand, and set our hearts to love the world as Jesus loved the world - in humility.

Blessings of love, hope and respect to all of you. But not comfort, because the time to rest from our labours (Hebrews 4:11) is not yet come.