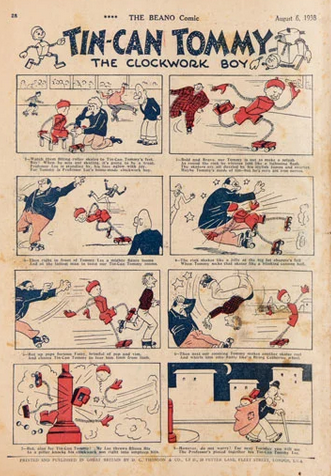 I used to love comics when I was a child. Had stacks of them. Bought them when I had a few pence - borrowed them, exchanged them. Short of larceny I got them where and when I could. In those far off days they were more than just pictures with captions, as they later became. They had stories with illustrations. Alas, they were racist, sexist and every other “ist” you can think of.

I realize now that my parents had great fears for the state of my mind. They would let things go for quite a while, then for some mysterious reason there would be an explosion of concern. Why are you reading that kind of thing? Don’t you know they’re bad for you! Those things are frightful! You are not to bring another one into the house! These explosions never explained the dire fate reading comics could bring. This was quite puzzling because in another mode and time my father would fondly recall the comics he had read. Had they then been more moral, more pure, more wholesome than what I was reading? I never dared ask this of course.

Enough of this. Imagine my pleasure on reading not very long ago of three very famous people who confessed to reading comics with much enjoyment. Despite this, all three lived - one is still living - reasonably respectable and responsible lives. One of these was Salman Rushdie who was in the news recently for being attacked on stage and nearly killed while he was speaking to a large audience. The two others were John Updike of literary fame, and, most significant of all for me, no less than Bruno Bettelheim, the great child psychologist.

My goodness, if a child who read comics grew up to be one of the world's great experts in juvenile behaviour, what did my father have to worry about? But then how were we to know that a kid named Bruno chewing his way through mounds of comics would become such a guru about kids. I should have told my dad, but by that time he was no longer mad at me anymore when he realized I hadn't grown up to be an axe murderer.

I never met Bruno. After all, he was in Austria and I was in Ireland. And anyway, he would have been 34 when I was ten, an old old man.