Conversations with a Painting: a Memoir

Charles Demers' review of the book by Donald E. Grayston 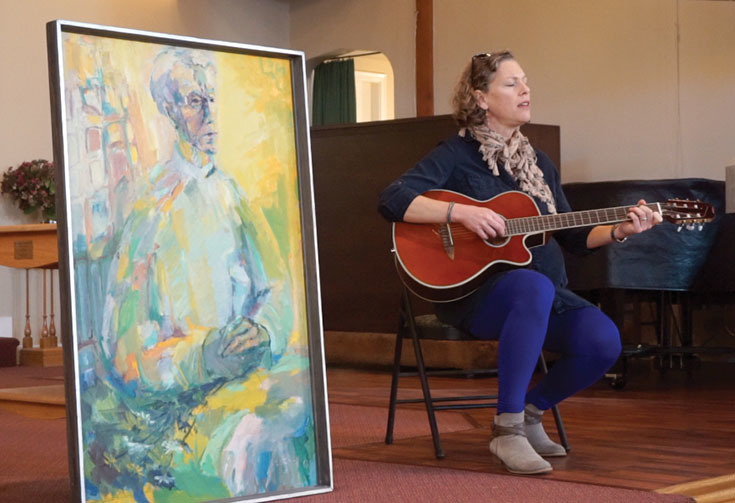 When I asked Don Grayston, in 2007, whether he would preside at my wedding, the response I got was not one typically expected from one's childhood priest:

“But Charlie, aren’t you an anarchist?”

During the ceremony a few months later at the WISE Hall, a couple blocks off of clerically-disinclined Commercial Drive and wearing a civilian collar and tie, Don hammed up his invocation of the authority of the Government of British Columbia: “Here’s where the bourgeois state rears its head.” Our guests adored him. When the time came for him to hand over the reins to our emcee, my sketch comedy partner Paul, Paul thought it would be fun to run up and slip Don a list of TV credits to rattle off by way of introduction. He began a stagey, faux-nervous stammer as he read and in that moment, Don was no longer a scholar-activist priest performing a secular wedding; he was a Vaudevillian. In a layer of irony that I think Don would have liked, Paul had become a comedian after quitting life as a pastor in the Korean-Canadian church. Conversations With a Painting, Grayston’s posthumous memoir, recounts at least a few episodes of jokes that turn out to presage something profoundly serious.

My wedding, to my wife Cara, was the penultimate occasion of Don’s presiding over important moments in my family’s spiritual lives, which included the marriage of my parents (1979), my baptism and my brother’s (1980 & 1983), my mother’s memorial service (1991), the wedding in 2007, and, finally, my grandmother’s funeral (2009). After that, Grayston’s own funeral, at Christ Church Cathedral in the fall of 2017, was decisive in drawing me back to the church into which he baptized me all those years ago.

A common mistake and enormous source of contemporary misery comes from the tendency to want to fit an individual human existence neatly into a clean, just-so narrative arc, and Grayston begins this story of his life by raising upfront questions about the “memoir boom” and whether it’s “just literary Kardashianism?” (He doesn’t think so.) But while the book begins full of quaint, WASPish biographical detail about a young, lower middle class itinerant Anglican priest and his increasingly frustrated wife, Grayston’s is a story that goes thoroughly cosmic by its midway point, deliberately unraveling into a series of unfolding pilgrimages and digressions; though the first parts of the book are told chronologically, by Don’s middle age kairos time and chronos time are being narratively braided in tight, overlapping patterns.

It’s a book that could have spun out into space. The narrative object that gives the story the centrifugal force it needs to hold is a painting called The Holy Man, painted in 1965 by Czech-Canadian artist Stanislava (Velenka) Fanderlik, and impulsively purchased by Grayston on first sight, seven years later. At the time he buys it, the painting is something between an avatar of his confidence and ambition (he has tied its purchase psychologically to the outcome of an academic grant whose rejection he is appealing) and a decoration for his home; by the end of his life, more than four decades later, the painting is his prayer companion and, as far as he is concerned, a functional icon in something akin to the Orthodox tradition. Along the way, the painting will address him, produce an injunction related to the years between fifty and seventy-five, and become the fulcrum not only of Grayston’s self-understanding, but his understanding of nearly every important, formative relationship in his life.

The cleaving event in the middle of the story of Don’s life, as he shares it, was the failure of his marriage, the closing months of which overlapped with an intoxicating and spiritually enlivening extramarital affair, at age 49. The new relationship, however, ended at virtually the same instant as the legal marriage, and the resulting shock, devastation, and rebirth were the stuff that Christian stories are made of. The moments of reckoning that came out of that forty-ninth year determined the path of the rest of Grayston’s life.

Grayston pays particular attention to the difficulty of ages ending in nine — he cites a newspaper article exploring the hidden challenges placed upon the years leading up to our big, visible milestones like 40, 50, 60. I read Don’s memoir from the vantage of the excruciating age of 39, and can speak to the immediacy of this truth; magnified, in my case, by the fact that it was the age my mother was when Don spoke to her memory at All Saints' church in South Burnaby, while a 10 year old me tried to figure out why I wasn’t crying.

Mortality has long been a structuring absence of my relationship with Don — memorials, funerals — but reading the story of his life as he reckoned it, in his words, made for a ‘thin place’ between him and me that canceled out death for as long as I was reading. In a recent conversation with the interim priest-in-charge at the Cathedral, Canon Richard LeSueur, when I explained Don’s role in my life and that of his death in my coming in to the parish, Richard suggested that Don’s passing had been like losing a sort of father figure for me — and at the time, I thought this was probably a bit of an overstatement, but didn’t see any reason to say so. As I'm reading Conversations With a Painting, though, it struck me more than once that Richard had been on to something profound. Like Don I spent years in the anti-war and Palestine solidarity movements; like Don I have a tendency to periodize my life (it makes for good writing, in Don’s case, but I’m not sure how helpful it is in life as it unfurls); like Don I was wounded early by an absent parent (his a workaholic father, mine a very sick, and then deceased, mother) and dealt with that cheated childhood by taking on precocious adulthood as a teenage boy through adopting an intellectually rigorous worldview (him Christianity, me Marxism). Most importantly for me to read, and I imagine that I won’t be alone in this, was how Don came to stop immediately making all problems into cerebral problems, allowing himself to learn to feel, though without ever sacrificing his intellectual rigour. Throughout the memoir, Grayston reserves pride of place for particularly cutting, wounding, accurate insults hurled at him by others in heated moments; the defining one of his early adulthood comes from an antagonist who calls him “a disembodied head.” In some ways, the life story told is about that head finding the rest of its body and soul — but from start to finish, with Don Grayston, the brain was the way in.

For the day of Don’s funeral, I had agreed to emcee the ‘open mic’ portion of the program in the church basement after the formal service, during the reception. As open mic’s always do, this one soon became a bit of a cacophony, with speakers going overlong and struggling to be heard from the corner of a crowded room wherein others were talking to each other over canapés. After we were mercifully wrapped, and Don’s daughter Rebekah — my former babysitter — gave me a hug, I told her “It was such an honour to be included in your dad’s last bad idea.” Reading this posthumous memoir, it brought me more joy than I can do justice with words to spend time with so many of his last good ones.

One of Donald Grayston's favourite singer/songwriters, Anna Baignoche singing at the October 26, 2019 launch of the book. The painting is on the left.