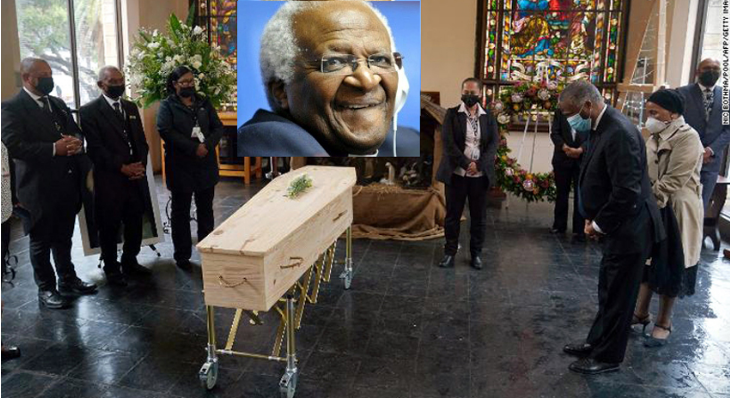 In February 2007, I flew to Hong Kong to attend a Venture Capital conference.  It was held by a fund run by my long-term business partner from Hong Kong, Josephine. She has been to our church.  It was the practice to have a surprise guest speaker.  You never know who, until the day.

That year the special celebrity speaker was Archbishop Desmond Tutu. I always try and sit in the front row at such events and did so then. I have never forgotten his presence in that room of 500 people. He was a small, diminutive man, but beaming with peace and power.  You could almost touch his pure channeling of Spirit.  His mandate was to share a small piece of his experience as chair of the Truth and Reconciliation Committee (TARC).

He captivated us with his humility, and total lack of any air of self-importance.

He first focused us on his awareness of the need for a peaceful transformation of power in South Africa (SA), and the horror of the flaming necklace, used by locals on each other and on whites in the last few years. This transformation depended entirely on the character of the three decisive actors at the time: de Klerk as the leader of the South African Afrikaner ruling white party, Mandela himself as the freedom fighter in goal for so many years, and the Most Reverend Desmond Tutu as the spiritual leader and Archbishop of the Anglican Church in South Africa. As he put it, this was the only time in SA history when all three actors in their roles had the right balance of awareness of the need for a positive change in history, humility and of forgiveness.

To make a peaceful transfer of power was at the time considered both in and outside of SA as almost impossible.

Even the European whites in SA were against the strict Afrikaner policy.

But then Mandela was released in February 1990.

The fact that two Nobel Peace prizes were awarded, one each to Mandela and Tutu, brought up ironically on the same street in Soweto, says it all.  They found forgiveness in their hearts, and the genuineness of it, attracted even the hardline members of the African National Congress (ANC).

South Africa had been a powder keg of civil war waiting to happen.

For me, the power of it all was accentuated by the fact that but three years before Mandela’s release, I had experienced this tension directly.  I’d spent six weeks in SA, touring 6000 kms with one of my two brothers, who was working there. There was a clear ice-storm in the air of both disaffection and hatred between all the racial divisions established by the post WWII Afrikaners – whites, Blacks, people of colour and “honorary whites“ - Chinese with money.

But strangely, it was much more relaxed in the countryside, of e.g. Stellenbosch and the Cape, and in game reserves for tourists where peaceful co-operation between races seemed to flourish.

So, the amazing concept of a Truth and Reconciliation Committee, to replace adversarial litigation, was eye opening, especially to someone who was a litigant by trade, and had felt the knife of heated tension cut through the butter of the autumn air, even though I was just an extended stay visitor.

Archbishop Tutu related a few of his amazing stories. But none sits so clearly in my memory as that of an elderly woman in a wheelchair, a member of a wealthy family who was in a park in Johannesburg, with her three white sons.

Suddenly they were surrounded by a mob of local South Africans. Heated accusations were made about brutal treatment by the wealthy land-owning sons of their own workers, including some in the mob. And a brutal death came for those three on that day.

This was apparently a relatively common story in the end of days – though the survival of the elderly woman was not so common.

Archbishop Tutu had managed to get together members of the mob and the elderly mother, in her wheelchair.  As may be seen in a recent BBC documentary about the archbishop, he took upon himself the pain of those he was encouraging to shed their hatred. You could see him doubled up in anguish, head in his knees, on hearing and feeling the pain of the victims, as they tried to shed their hatred.

In the case of the elderly woman, the mob listened to the archbishop and went down on their own knees seeking her forgiveness, in their genuine river of tears.

Don’t forget, as I understand it, Archbishop Tutu’s mandate as chairman of the TARC did not include any power to commit anyone to prison.  Just to forgive; so, any in his TARC actually seeking forgiveness would have no other agenda.

The elderly woman sobbed. She also asked for forgiveness for not bringing up her children to be different from their father and forefathers, another generation unable to love their black fellow men and women as equals.

I wept openly then and now again as I retell it for just the second time in 14 years, in honour of the passing of this giant of a man.

I felt the channeling power of Archbishop Desmond Tutu, the man, and his spirit as he simply channeled peace.  So great was the power of the man.