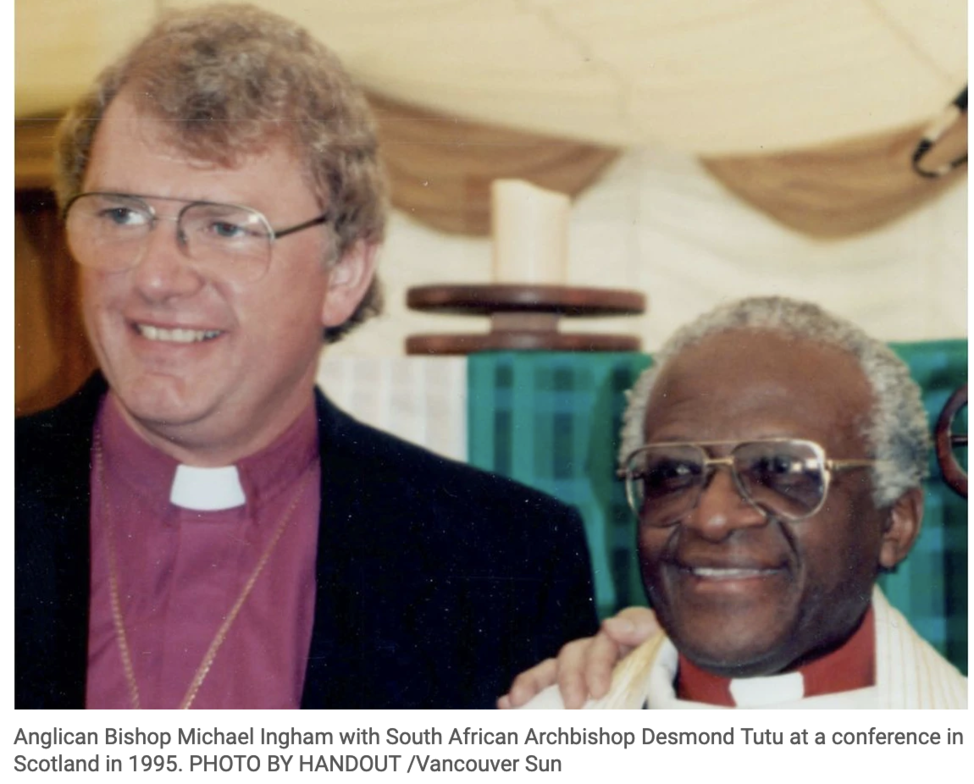 I first met Desmond Tutu when he came to Vancouver in the mid 1970s.

It was in a small house in Deep Cove where the local Anglican priest was acting as Desmond’s host. He was the Dean of Johannesburg then, not yet a bishop, already catching the attention of student activists and anti-apartheid campaigners in Europe and North America.

About 20 of us sat on the floor of the living room, where it soon became clear that this man of short stature was an oratorical giant. His words and charisma were electrifying, moving, emotional, and scathing. We were an early audience of what would become thousands of his followers and admirers over the next few decades.

When he later became the head of the Anglican Church in southern Africa, the infamous Pass Laws were still in place which, among other things, assigned the right of travel and residence on the basis of colour and race. Previous Archbishops of Cape Town had all been white. The archbishop’s residence was in a white-zoned area, a palatial pile called Bishopscourt with spacious gardens and a swimming pool.

Someone in government suggested to Desmond that he would probably prefer to live “with his own people” – meaning in the slums of Soweto. Desmond moved in to the archbishop’s palace, and promptly invited children from black, coloured, and white areas of the city to a party in the pool. The government created a special exemption for him from the Pass Laws in order to avoid an international incident.

I saw Desmond again in Northern Ireland in the midst of the “Troubles.” He was there with other leaders – or primates – of the Anglican Communion who (then and now) made an effort to visit places of suffering and hardship both to understand the realities of local conflicts and to bring a word of hope.

The Irish Primate had set aside an evening to educate the other archbishops on the Northern Ireland situation, and to bring them face to face with two prominent political guests who were brought in under special security arrangements supervised by the British military. One was the leader of the Republican separatists, the other the leader of the Union loyalists. They had never been in the same room together.

It was an extraordinary evening: an outpouring of bitterness, anger, and accusation, but also with glimmers of willingness to understand, to concede, to seek a better way. As it ended we were sworn to secrecy. No public record of the meeting exists. The guests had to be taken home the same way they had been brought.

The Irish Primate asked the Archbishop of Canterbury-elect (who was to be installed in a few days time) to close the evening by thanking the guests. To his everlasting shame, the Englishman rose and said pathetically “Let’s give these chaps a hand!” There was silence in the room. (“Thus the English contempt for the Irish” remarked the Canadian Primate).

It was Desmond who rose, uninvited, and thanked the guests – for their courage, honesty, bravery in tremendously difficult circumstances. He spoke briefly of the struggles against apartheid, the cost of striving for peace in an unjust time, and astonishingly praised them both for moving towards the point that had taken South Africa many more years to learn. He was gentle, powerful and consummate in his graciousness, diplomatically saving the Primates from a deep embarrassment.

One of the last times I saw Desmond was in 2004, when UBC and Simon Fraser University both gave honorary doctoral degrees to him and to his great friend the Dalai Lama. The chemistry between them crackled with impish fun and profound wisdom. A public dialogue was held at the Chan Centre with them and three other distinguished representatives of religious faiths.

The Dala Lama was the only person on the stage who, as a Buddhist, did not believe in God. When asked about this, he spoke movingly about how belief in external deity can sometimes lead us not to take responsibility for the world ourselves. Desmond appeared to be shocked, and teased him – “You don’t believe in God?” he cried. “Whom then do you blame?” And then he spoke powerfully about how faith in God had sustained them in South Africa through the dark years.

Wherever he travelled, Desmond never failed to thank people for their support during those dark years. He never underestimated the continuing tragedy of human suffering. And he never lost his sense of humour nor the capacity to delight and inspire with his gift of joy.

(This piece was originally printed online by The Vancouver Sun, December 27, 2021, it is published online here with permission from the author.)