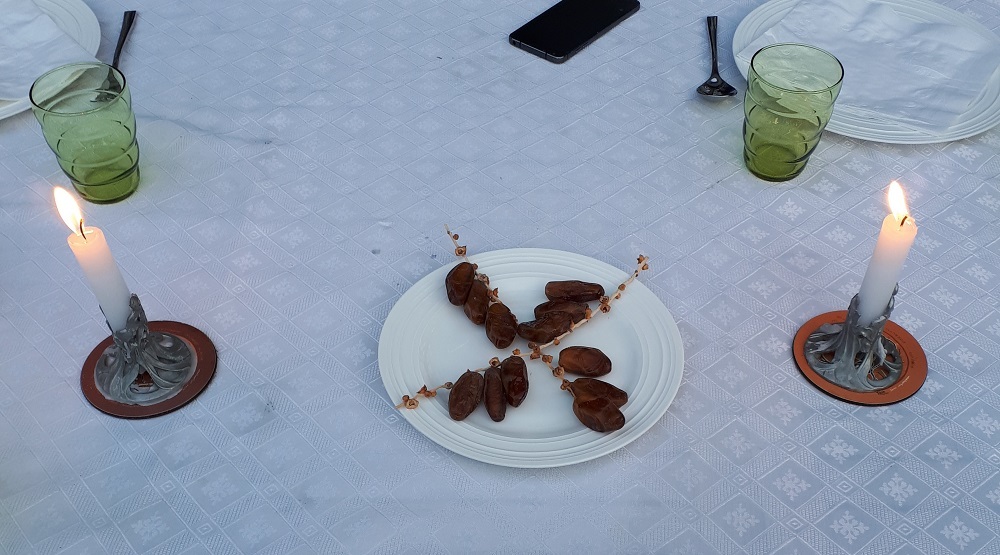 Back in May of 2020, one of the first gatherings I did after the world exploded was for iftar at my friend Seemi’s house. Iftar is one of the two regular meals that breaks daylight fasting in the month of Ramadan (the other, sahur, happens before dawn). We gathered in her backyard, bundled up against a chilly evening, and opened with salat, evening prayers. We then had a small serving of dates, traditionally the first food consumed after a day of fasting in Ramadan. There are a number of reasons for this, including the rush of energy they provide, which some say helps prevent overeating after a long day of rumbly bellies! They were delicious even for someone who had not been observing the fast: sweet and juicy, although not as sweet as being able to gather with dear friends in person for the first time in a while, relatively new friends who I had been drawing closer to before the pandemic forced us apart. We stayed long into the night, laughing and delighting in one another, enjoying the feast

Periods of individual and communal fasting are common across many traditions. Judaism has times where a total fast from food and water is observed, including on Yom Kippur, the Day of Atonement, and Tisha B’Av, which commemorates the destruction of the Second Temple. Hindus also observe a period of fasting for nine continuous days around the festival of Navaratri, which celebrates the victory of good over evil in the goddess Durgha’s defeat of Mahishasura. And of course, Christians fast for forty days during the season of Lent.

In the Jewish and Christian traditions fasting tends to be associated with feelings of penitence or mourning. In Islam, fasting in Ramadan is meant to keep the believer in mind of the poor and hungry, and acts of charity are mandated for Muslims during that month. Hindu fasting during Navaratri is an act of devotion to the goddess Durgha as the devout seek to welcome her into their homes. Fasting can also be a political act seeking to draw attention to an injustice, although it’s reductive to say that there is never a spiritual element to it in those situations.

Part of what made that iftar gathering so special for me (apart from the samosas!) was the breaking of another fast: the fast from being together, imposed upon us by COVID-19. Around the world so many of us were forced to observe a two-year fast of physical closeness from others, and all of the festivals we would normally celebrate during the course of a year had to be cancelled or adapted significantly. That first Holy Week and Easter apart was rough, and I know my Muslim friends went through the same grief as they spent the prayerful night of Lailat al-Qadr and the joyful festival of Eid apart or in much smaller groups a few weeks later.

Despite our many differences, all of us as people of faith have more in common than we think. COVID-19 in particular has given us a strange gift of being united in feelings of sorrow, anxiety, rage, grief, and hope. As restrictions begin to slowly ease, my prayer for you is that the breaking of any fast come with the sweetness of dates, and the delight of friendship around a table.