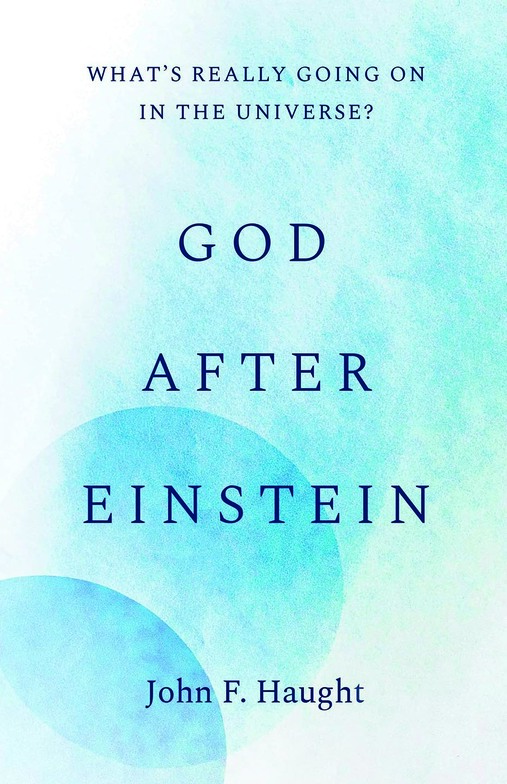 This is a book of hope about the world, about human history and the history of the cosmos. The author, Professor John Haught is a distinguished research professor at Georgetown University. He specializes in Science and Theology. He is doing ground-breaking research of reinterpreting Christianity considering the findings of modern science. God After Einstein is an extended meditation on Einstein's religious beliefs, Einstein's Theory of Relativity, and the Nicene Creed. I was motivated to read this book after being a part of a Zoom discussion with the author. It was insightful and motivational!

Haught's discussion of Einstein's religious beliefs is fascinating. I had read in other works some of Einstein's most famous quotes about God and religion. As Haught explains, Einstein's God can be seen as a pantheist-God. Einstein's God was the timeless mystery that gave order to the cosmos. The key word here is timeless. Einstein believed that our sensation of the passage of time was an illusion. But, as Professor Haught points out, the Theory of General Relativity binds time to matter. Time being an unreversible part of reality as it is always moving toward the future and cannot do otherwise. It is very real, although Einstein was enchanted by eternity. This notes the dissonance between Einstein’s theology and his scientific theory.

Haught stresses that with the demonstrated insight of Einstein the universe is a dramatic, unfolding story in time. Its meaning will develop in time, not in eternity. Haught describes his own theology as “anticipatory” i.e., God is not-yet. The universe is a story that is only just beginning. The ever-expanding universe is 13.8 billion years old, which sounds incomprehensible, but it will last for hundreds of billions of years to come. In the Zoom interview he noted that God writes a chapter of the Big Bang Creation of the Universe about every 500 million years. There are 30 books written so far with more to come. We see this vitality through the pictures of the cosmos from the James Webb deep space telescope.

The universe is still very young. We do not yet know the meaning of the universe or exactly who God is because the story is just beginning. Intelligent life appeared only moments ago as seen in book 29 from a universal perspective. As Haught stresses over and over, we must be patient. We must allow the story to unfold, and we can trust that the story will be the fulfilment of right over wrong because God is a God of time and change and drama, not a remote, changeless God, eternally indifferent to the fate of the universe. On the contrary, from the very beginning, from the calling of Abraham to God's dramatic entry into time in the person of Jesus of Nazareth, biblical faith has always been based on a belief that history has meaning. Our history and the history of the universe have meaning, but the story has just begun. The meaning is “not-yet”. We must be patient and live in hope.

Professor Haught describes three basic approaches to the meaning of time: (1) the archaeonomic, (2) the analogical and (3) the anticipatory. The archaeonomic approach is basically that of scientific materialism. It is the world view of many scientists and philosophers and is essentially nihilistic. The archaeonomic view of time looks backwards. The universe began as a lifeless lump of particles, mindless and meaningless. Somehow these particles created conscious beings. What is real is the mindless lump of stuff at the Big Bang. It's a story "told by an idiot--full of sound and fury, signifying nothing”. Haught in short dismantles this argument and definition pointing out the fatal flaw in the archaeonomic position: the scientists who believe that mindless matter is the ultimate reality nevertheless believe that their minds can be trusted to perceive the meaning of the universe. “But if mindless matter is the stuff that makes up the materialist's mind, why should we trust those minds?” asks Haught. Implicitly, even the scientific materialist believes that there is more to the story of the universe than mindless matter. This archaeonomic view of the future is utterly despairing. The universe will die and take mind, consciousness, morality, and art into a meaningless abyss of everlasting nothingness. If scientific materialists believe in the pointlessness of the universe, why write about it?

The second view is the analogical view of time. Most Christians are in this camp. Ultimate meaning is in eternity, in an “eternal now”, where past, present, and future exist in the mind of God. There is no drama to this universe, no point to the passage of time. To the people who seek for meaning only in the eternal now of God, time is pointless. The universe is a story that was told in its entirety at the very beginning in Genesis. Modern science and observation have demonstrated that this position is wrong as we see in the data from the James Webb deep space telescope. This stance also leaves no room for emergent Divine Energy inspired revelation and change. Christians can be caught with an understanding of God who endorses tribal brutality and retribution as being blessed by God. These views being an anathema to modern reflective people.

Professor Haught endorses the third response, the anticipatory view of time. He looks to the future where God is waiting for us as well as within in us. Time, in his view, is dramatic, an unfolding of a great story. How will the story end? Well, that's where patience and hope come in. The story is just beginning, but we can face the future with hope because God waits with us, as the Nicene Creed affirms, in the life of the world to come. It is a wonderful book for our times of uncertainty. Racism, Climate Change, church decline with the rise of violence and extreme hate and antisemitism all challenge society and world sustainable peace. Against this background, it is a book of hope, based not on a rejection of science, but is fully consistent with the findings of science.

In my view, Professor Haught did not write this book to bash scientists and to cheerlead for religion. On the contrary, he has the deepest respect for the findings of science because it has revealed a universe that is a remarkably unfolding drama. He notes the pessimism of scientific materialism is based on a backwards view of time--reality is the mindless lump of particles that exploded at the Big Bang, and consciousness is merely an accident. But the story so far contradicts that point of view. The universe has created beings who feel, think, love, hope, and strive to understand. The universe is a drama, and to understand it, one must look forward, not backwards such as the scripture notes of Lot’s wife who turned into stone.

This is one of the most hopeful, optimistic, and restorative books for these anxious times. It's inspiring! Dr. Haught is a pioneer in the endeavor to interpret religion considering what modern science has uncovered and demonstrated. In this respect, he has similarities to process philosophers such as A.N. Whitehead and Brian D. McLaren as well as theologians like Pierre Teilhard de Chardin, Thomas Berry, John Polkinghorne, and Ilia Delio. God After Einstein is part of an important, ongoing conversation between theology and science. It is a must read for those who understand and seek to worship God “in Spirit and in Truth” following Jesus’ advice to “dig and dig deep as we build our house (faith) on rock” ((Luke 6:48) as we explore and practice our faith with reality in the light of the revelations of modern science.