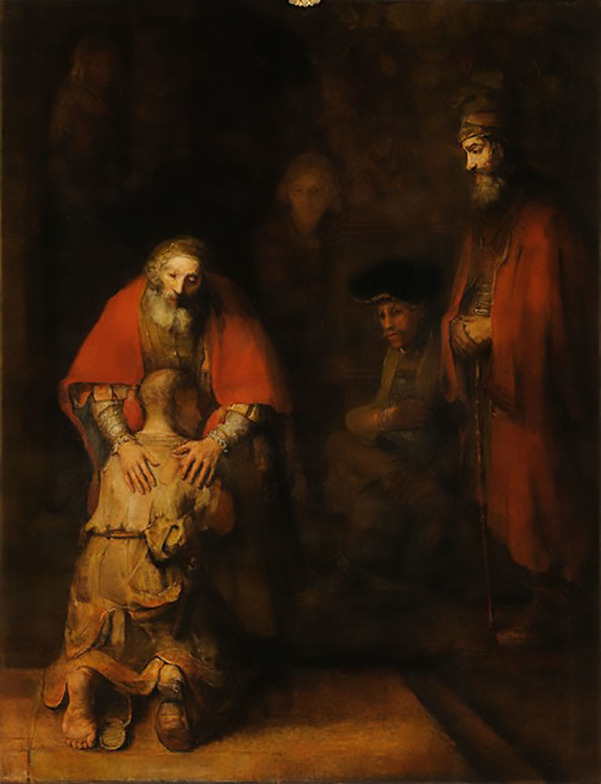 “Now his elder son was in the field; and when he came and approached the house, he heard music and dancing. He called one of the slaves and asked what was going on. He replied, ‘Your brother has come, and your father has killed the fatted calf, because he has got him back safe and sound.’ Then he became angry and refused to go in. His father came out and began to plead with him. But he answered his father, ‘Listen! For all these years I have been working like a slave for you, and I have never disobeyed your command; yet you have never given me even a young goat so that I might celebrate with my friends. But when this son of yours came back, who has devoured your property with prostitutes, you killed the fatted calf for him!’ Then the father[e] said to him, ‘Son, you are always with me, and all that is mine is yours. But we had to celebrate and rejoice, because this brother of yours was dead and has come to life; he was lost and has been found.’” Luke 15:11-32

In the land of my birth there is a radio program still running after 80 years. It is called Desert Island Discs and it supposes that you are left alone on a remote island. It also suggests that you have the means to play 10 pieces of music and so the guest each week is asked to name their 10 and why they choose them.

Sometimes I wonder the same thing about bible passages; if I had to choose which ones would make the cut. Perhaps it comes as no surprise that the prodigal son is a must have, if I had to pick.

Both Jesus and Luke are consummate story tellers; and the parable begins: ‘There was a man with two sons’.

Of course one son is perhaps better known for asking his father for half of his inheritance. In the time of Jesus inheritance laws were clear, the oldest son got everything so the idea of the younger son receiving half of the estate was most extraordinary. Next the same younger sibling goes off and blows the money in what the gospel calls ‘dissolute living’. He returns home after realizing he has lost everything in hopes that his father will allow him to come and work for him. The narrative tells us that the younger son (we are given no names) realized that his father’s hired hands fared much better than he did when feeding pigs and eating their food because of his hunger.

We know the rest; the father welcomes home the younger son with open arms and a feast. We also hear how the elder son deeply resented the way his brother was treated when he returned.

The narrative told by Jesus enables all of us to know, once and for all, how God treats human beings. In short God has no favourites, and when we make a mess and sin, God will forgive us, as the father forgave his younger son.

As those who follow Christ today we have to ensure we don’t become the elder son who resents his father and his brother for the way the father treats his sibling. For as the last part of the narrative suggests, in words spoken by the father: ‘we had to celebrate and rejoice, because this brother of yours was dead and has come to life; he was lost and has been found.’

For the last 20 years a poster of this parable by Rembrandt has occupied the rector’s office. Henri Nouwen, the late catholic theologian and writer was transfixed when he first encountered this painting. His excellent book: The Return of the Prodigal Son discusses the picture in great detail. As the cover of the book states:

‘Henri Nouwen probes the several moments of the parable: the younger son’s return, the father’s restoration of [his son], the elder son’s vengefulness, and the father’s compassion.’ And he goes on: ‘The themes of homecoming, affirmation, and reconciliation will be newly discovered by all who have known loneliness, dejection, jealously or anger.’

In our lives, relationships are key to our grounding and peacefulness. None of us exist alone, even if we live alone. And all of us, every day of lives are required to be in relationship with other people; that’s the way God intended it to be. Our spiritual journey is about figuring out who we are, in relationship to God, ourselves and other people. We often think we know ourselves well and yet our lives seem to be a constant revealing of who we really are. To be grounded, to be peaceful in our lives we have first to know ourselves and accept ourselves as we are. For only then can we begin to really see how we relate to God and others.

The nature of life is that all of us are broken and hurt in a variety of ways through the events and circumstances of our up-bringing, our schooling, our friends, our work, as well our relationships with parents, partners, siblings, children and grandchildren. As we walk with Christ, as we move forward in our lives, we are called to gain deeper insights, come to know ourselves better in order that we can be the people God knows we can be.

‘For most of my life I have struggled to find God, to know God, to love God. I have tried hard to ... pray always, work for others, read the Scriptures—and to avoid the many temptations to dissipate myself. I have failed many times but always tried again, even when I was close to despair.