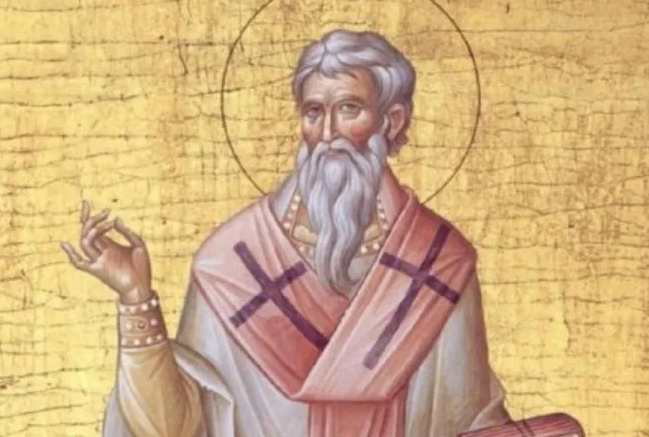 Irenaeus was a second-century bishop and teacher of the faith, who defended Christianity as a gospel for all of human life, in all its dimensions.

Irenaeus grew up in Asia Minor and learned the Christian faith from Polycarp, the holy bishop of Smyrna. After further studies in Rome, he settled at Lyons, a city in south-central France, where he became a presbyter. In the year 177 the Christians of this city were caught in a horrible persecution, during which their bishop and many others were martyred. At the time Irenaeus happened to be at Rome on official business, and when he returned to Lyons the surviving Christians elected him as their bishop. Over the next two decades he rebuilt his shattered community; and in the wider life of the Church he lived up to his own name, which is the Greek word for peace, by helping to re-establish harmony between the church of Rome and the churches in Asia Minor. He died at Lyons around the year 202.

Irenaeus was one of the first great theologians of the Christian Church. His most famous work is Against the Heresies. It is a long defense of Catholic doctrine against the people known as Gnostics, whose infiltration of Christianity was the great crisis of the second-century Church. This movement was divided into many different groups, but all shared a common belief that physical life was unredeemably evil. They taught that an immaterial spark of the divine was imprisoned in the flesh, and that “true” Christians should learn how to free it, so that it could fly upwards and be reabsorbed into God.

In his great work Irenaeus showed how Gnostic teachings conflicted with the Incarnation and resurrection of Christ. He
taught that the Word became flesh in order to sanctify the whole of human life, its physical as well as its spiritual side, so that nothing was left outside the creative love of God and the transforming power of Christ. Though Irenaeus addressed his message to people and movements in the second century, his basic message has remained a touchstone of the Church’s thinking ever since.