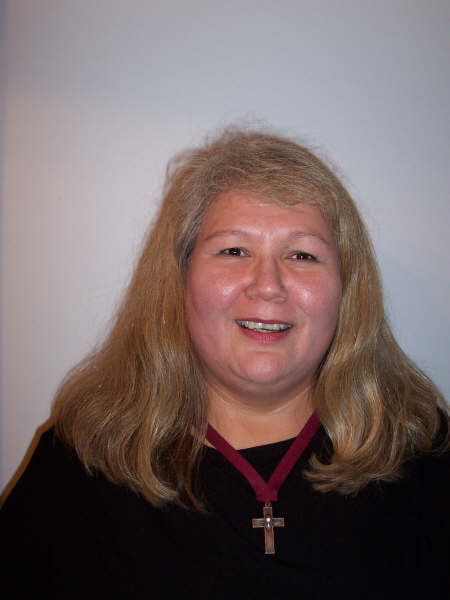 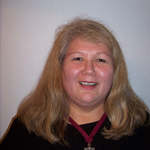 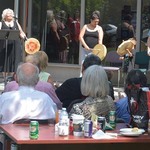 So let me set the scene – St. Mary Magdalene Church  the home of Urban Aboriginal Ministry. It  has a small simple but beautiful sanctuary, that  we set with 10 chairs at the  proper social distance. There are 2 doors opening at street level -  on one side to some grass and shade under a large old tree, on the other a path to the garden she and Jean Senior helped to create -  now a memorial for her. A table was set with coffee, tea and snacks. The drums were out on the altar . It is 5 minutes away from Vancouver General Hospital (VGH).

Word got out that we were open for a vigil and people started to arrive right away. Bruce smudged the sanctuary, the kitchen and the yard.

There was a sense of deep sadness as we waited for 2pm when Vivian would be taken off life support. The family were at VGH and people were allowed to go in for a short last visit. Steven, her son was at the church leading us and keeping in touch with his sisters.

The former vicar at St. Mary Magdalene, the Reverend John Marsh was among the first to arrive – a mentor, friend and supporter of Urban Aboriginal Ministry for over 20 years.  Vivian's family, daughters Clio and Deanna and son Steven, men and women Vivian had loved,  mentored and supported in many ways as only she knew how. There were 8 clergy colleagues some from her Advisory Committee, her brother and his wife, her sister and her son, two families with 5 little boys between them. A steady stream of 50 people by my count. Some left and others stayed. Chairs were carried outside and small groups formed by the bench, some sitting on the grass in the shade some walking, restlessly waiting.

Lots of tears and memories shared, drums played and put down and played again.

Lots of hugs and more tears. Food and drinks were passed around by church members.

The little ones were drawing in the common room and talking about angels and spirits and the fact that their auntie was dying. Their dad sat with them and hugged them as needed. After a while they became restless and so I let them into the sanctuary because it was empty. I played children’s songs and games with them. A little 2-year old came along and just joined me on the piano with a big smile on his face. And then it was time for them to run around outside in the sunshine. Their voices and energy a gift to us all.

I’m not sure of the time but a group of us sitting under the tree, picked up the drums and began to play. Rose Dejolais – UAM elder and member of the Dene First Nation was offered a drum but she declined having grown up with the idea that women didn’t drum. However, we were not long into this when she picked up a drum and joined in on the Women’s Warrior song…..and we drummed and sang and gave thanks for Vivian in English and Dene. The same little 2-year old came and drummed with us – we have a small drum just his size thanks to Vivian and Randy her brother and a gifted drum maker – what a gift! Rose later told us she heard Vivian saying to her to pick up the drum.

As we were finishing Steven got the call – we had been drumming for her as she passed drumming her into  the light and we were so thankful! Her last rites performed by Rev. Emilie Smith – her dear friend for many years and a great support for her family and friends over this past month.

And then of course it was real -- her loving, amazing presence was no longer with us, but we all knew without a doubt she was with her Creator.

Family arrived from the hospital and we got to meet one another and realize that we are all family – a gift she  knew how to create and sustain with feasts, gatherings, memorials, camps, Sundance, ceremonies that combined Indigenous and Christian traditions in beautiful simplicity and of course her many acts of kindness and justice.

There was more drumming, Natalie and Jessica her amazing proteges, Jesse Bear drummed and sang the Eagle Song. We sang Resting on the Everlasting Arms and Amazing Grace.

Truly a day that was a tribute to the amazing gifts, dedication and love of our dear sister in Christ. She will not be forgotten.