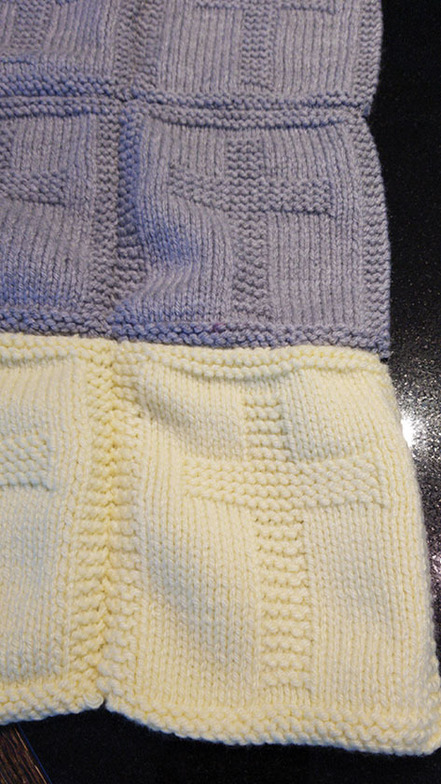 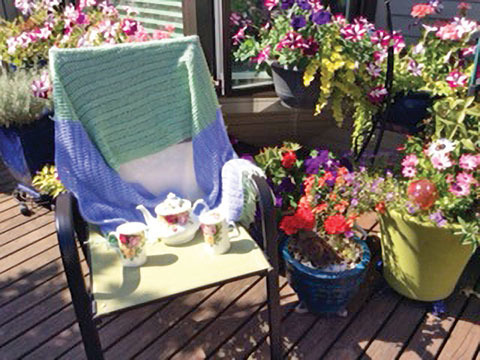 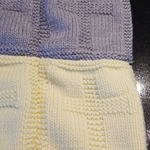 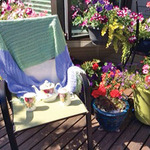 Cheryl Parker had to ask what it was – that beautiful splash of gentle colour – lavender and pale green – across her dying mother’s utilitarian hospital bed.

A prayer shawl, a nurse at the Norfolk Hospital Nursing Home in Simcoe, Ontario told her, knitted by a member of the home’s auxiliary.

Called from Vancouver to sit with her unconscious mother in February, 2015, Cheryl watched until death came a day and a half later, as nurses and doctors tended their patient, carefully replacing the prayer shawl over her each time.

“It was a source of comfort.” To me, she adds. “Mom never knew it was there.”

From Gambier Island, Liz Dunbrack tells it straight.  “I’m a beginner knitter going way back.”  But she keeps at it, remembering the instructions given to her decades ago in the Girls’ Auxiliary at Montreal’s St. Matthias Anglican Church - pray as you knit.

She’s mostly mastered a simple pattern for a prayer cloth - “I still make mistakes . . . I drop a stitch and rip the knitting back until I can pick it up again.”

Every day pretty well, the 5”x7” patches come off her needles as she prays for those who will eventually receive her knitting – “for strength and ability to face whatever they’re facing.”

And for herself. “I feel very close to the good Lord.”

Although she’s the administrative force behind Christ Church Cathedral, Vancouver’s (CCC) prayer shawl ministry, "the funny thing is I wouldn’t consider myself a knitter,” she says.  “I wouldn’t know how to follow a pattern.”

But when she was given a prayer shawl herself at a parish nursing conference, she was hooked. “It was just the fact that someone had taken the time and prayed for us.  It blew me away.  I get choked up even now thinking about it.”

Bonny started knitting shawls for family and friends and anyone she knew who was going through a rough time, a category which could include just about everybody, sooner or later.  “I would give it to that person and say - ‘Just envision the arms of God going around you’ and I could see people kind of relax.”

After she was handed the CCC prayer shawl file a few years ago, she went looking for help. “I just kept on asking people, ‘Do you knit? Do you knit?’”

Her team of nine turned out about 80 shawls last year, in all sizes and shapes and colours and textures. “The only guiding rule is that you pray. . . it’s not an in-depth intellectual process.  You just go with the flow and give your best intentions to the person who will get the shawl.”

Donations of wool and money have kept the knitters going, but with the congregation’s cupboards now nearly emptied of spare yarn - “we’re getting pretty slim pickings” - the ministry has this year, for the first time, a line item in the budget to buy supplies.

(Bonny appreciates all donations but does hope she’s used up every last ball of left-over, super-fine baby wool that’s out there.)

Gifted with COVID-19 time, she put together 12 prayer shawls between March and July. When all the shawls knitted during this pandemic can be blessed, as usual, at a Sunday morning service, “we’re going to need a wheelbarrow to take them up to the front.”

In normal times, she keeps a prayer shawl in her office.“ They are one of the first things I offer to people when I meet with them for a pastoral visit – ‘would you like to sit with a shawl while we talk and pray?’”

At the end of the visit, "I've been able to offer this symbol of the prayers of the Cathedral community to take home with them.”

At a post-service Cathedral family lunch one Sunday, Bonny introduced the children to prayer shawls, and made sure each child had one to keep, including one young boy notable for his young-boy energy.

His mother later sent Bonny a photo of her lively son, cuddled into his prayer shawl, sound asleep.

Cheryl keeps her mother’s shawl draped over a deacon’s bench in her living room,  and wears it to her home parish of St. Mary Magdalene each February to commemorate her mother’s death.

“It reminds me of Mom,” she says, “. . . and of the fact that someone was kind and loving enough to make it for someone she didn’t know and would never meet.”