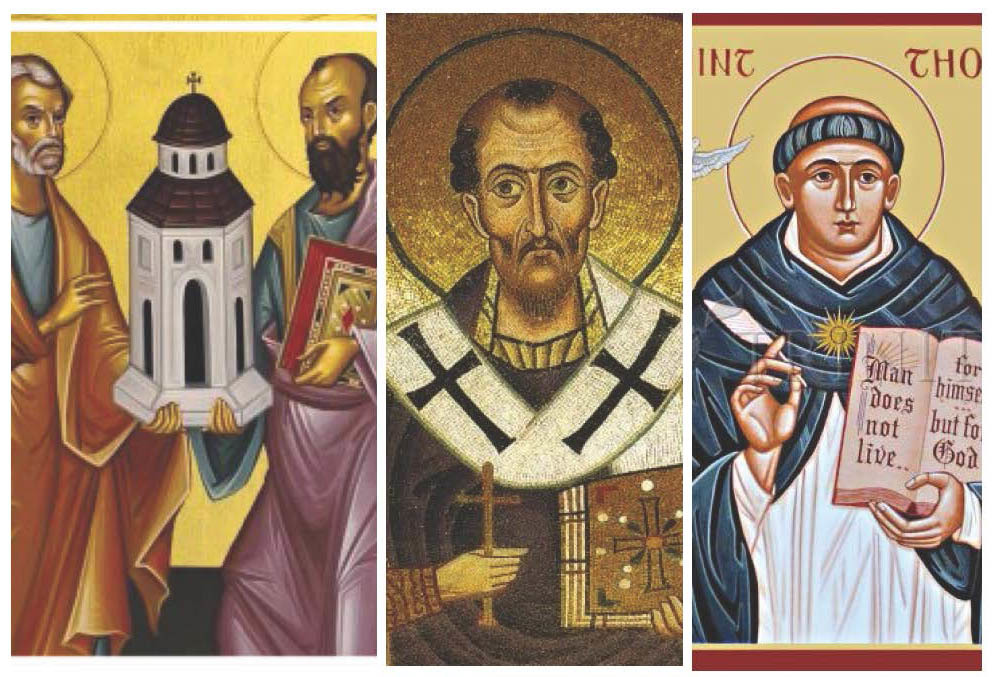 Today the Church remembers Timothy and Titus, two of the many people who assisted Saint Paul in his apostolic work. According to the Book of Acts, Timothy was “the son of a Jewish mother who was a believer, but his father was a Greek.”Paul himself converted Timothy to faith in Jesus Christ and called him “my beloved and faithful child in the Lord.” Though a young man and relatively new to the faith, Timothy shared the Apostle’s trials and labours in Asia Minor, and served as his emissary to the church at Corinth.

The background of Titus is even more obscure, though we do know that he, too, was a Greek and a fairly young man. It seems that Titus became the permanent liaison between Paul and the church of Corinth. In his correspondence with the Corinthians Paul called Titus “my partner and fellow-worker in your service.” Paul went on to remark:“We have urged Titus that as he had already made a beginning, he should also complete among you this gracious work.”

So it is, on the day after the feast of Saint Paul’s conversion, we honour his companions and fellow-workers Timothy and Titus, not only for their service to Paul, but also for their own faithfulness in the love of Christ and in the building up of the Church.

On this day we remember John, an ancient bishop of Constantinople whose eloquence earned him the nickname Chrys-os’tom, “John the golden mouth.” But he was more than a brilliant preacher. He also led a life of true holiness, giving himself continually both to prayer and to the cause of justice.

Born at Antioch around the year 350 and raised by his widowed mother, John studied rhetoric under an eminent pagan teacher. Years later, when someone asked this teacher whom he wanted as his successor. “John would have been my choice,” he answered, “if the Christians had not stolen him from us.” Stolen or not, John gave his whole heart to the Christian way. While his mother lived, he stayed with her at home, but under a strict rule of life. When she died, he tried his vocation as a hermit. Ill health drove him back to Antioch, where he was ordained to the priesthood.

During the next twelve years John earned his reputation as a preacher who made the text of the New Testament come alive for his hearers. His fame quickly spread far beyond his home city, and in the year 398 the emperor decided that he should become bishop of the imperial capital, Constantinople.

John attempted to reform the moral character of his clergy and called upon the imperial court to heed the cries of the poor and the hungry. His innocence in ecclesiastical politics made him easy prey for his unscrupulous rivals, and they engineered a synod which tried John on trumped-up charges and deposed him. The emperor confirmed the synod’s judgement and sent John into exile. Soon afterwards Constantinople was hit by an earthquake. This put the imperial court in fear of God’s wrath, and John was recalled, only to be exiled again a few months later. He died in the year 407, a victim of brutal treatment and exposure.

Thomas Aquinas was a thirteenth-century Dominican friar who spent most of his adult life teaching in universities. His powers of concentration were legendary. He once stood in front of three different scribes and dictated three separate works at the same time, without losing the train of his thought in any of them. Thomas was also a man of constant prayer: his students often found him kneeling beside his desk when he was working on a difficult theological question. He understood that he had his gifts to help the Church lay hold of “the truth as it is in Jesus.”

Unlike many other theologians at that time, Thomas saw no contradiction between human reason and God’s revelation. He once said that God gives grace not to destroy creation but to make it perfect — to raise it above itself, so that the whole human being, through its reason, might actively share in God’s own life. This insight has been gladly confirmed by the Church — and particularly by our own Anglican tradition.