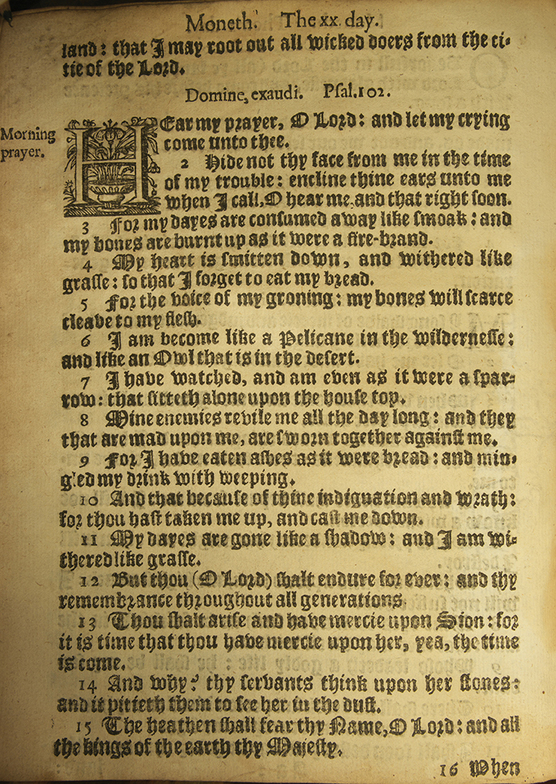 The introduction of the Psalm sets the stage for what is to come – the Psalm is a prayer to God. It is a prayer to the one known as YHWH, which is name of covenant. Hence, the psalmist has a basis to hope that God will hear because he is part of the covenant people. Nevertheless, he suggests that expecting God to hear is not something that can be counted on as a matter of course. God, he suggests, is one who can hide his face. There is no explanation provided why God might do this – it is rather simply stated as something that can happen. If God hides [his] face, then all prayer is vain and a waste of time. Hence, it is appropriate that the prayer starts by asking God not to do this.

Psa. 102:4  My heart is stricken and withered like grass; I am too wasted to eat my bread.

Psa. 102:8  All day long my enemies taunt me; those who deride me use my name for a curse.

Psa. 102:10  because of your indignation and anger; for you have lifted me up and thrown me aside.

It is commonly believed that the Psalms are semi-autobiographical, and that in them we get a glimpse of the inner struggle of some ancient scribes. I have problems with this. It makes the Psalms strangely individualistic – something that corresponds more closely to our sensibilities than to those of the ancient writers. According to this individualistic perspective, the psalmist in verses 3 through 11 explains his situation. He seems to be experiencing some sort of disease and is being treated badly by his enemies. He has no appetite, has fallen into a state of depression and feels like he is going to die. Every translation I know puts this in the present tense – that is, this is something that the psalmist is experiencing as he writes.[1]

The person who wrote this Psalm was a scribe – a professional who was employed to produce liturgical texts. His purpose for writing was not self-indulgence. He wasn’t laying his soul bare before the people – that wasn’t what he was being paid for. Like any good poet, he was drawing upon experiences he had known, but he was not doing so as an exercise in autographical transparency. I suggest his intent was to give expression to what he suspected others were experiencing. He does this using the literary “I” which is not meant to give expression to his own idiosyncratic self. Rather, it was to provide a means for readers to appropriate this text for their own lives. “I” is an invitation for the reader to take this as their own – to meld the subjectivity of the text to their own subjectivity. The psalmist is trying to give voice to the hardship being experienced by his readers. His manner of expression is just vague and poetic enough for most people to appropriate, at least at certain times in their lives. His readers, then are the ones who know the frustration and hopelessness of bad health and bad relationships.

The New Revised Standard Version of the Bible (NRSV) renders verse 11 as, “My days are like an evening shadow.” This is okay. The Jewish Publication Society Translation renders it: “My days are like a lengthening shadow.” This is a little closer. A wooden translation is “My days stretch out like a shadow.” This is a wonderful metaphor of growing old. Think of your shadow as the sun is setting as it lengthens and becomes less distinct. Then night comes and the shadow is gone. This is a poignant image for death. Again, it is not that the psalmist himself is growing old – he might have been a young man – but rather that he was writing to give expression to some among the people who were growing old and facing their “nights.” It is as beautiful as it is sad.

Why are the people to whom the psalmist is writing suffering? Verse 11 explains; it is because of YHWH’s indignation and anger. Why is God angry? While we might want to say it is because somebody has done something wrong, in doing so, we go beyond the text. Indeed, if this were what the Psalmist was thinking, then I think we would be right to expect some sort of confession – and there isn’t one! So, if God is angry but not because of wrong-doing – why?

What does it mean that God is angry? What is anger? We all understand anger as it is something most of us encounter daily, both within ourselves and from without from others. It is an emotional response that is typically not volitional. That is to say, I usually don’t choose to get angry – rather it emerges in response to something perceived in another as a violation of some sort. Is this true for God? Is “He” losing control of his emotions? When we speak about God, we use our own experiences to speak about Him – that is, we project upon God a response that would make sense for us. So, when we think of God being angry, we take our own feelings of anger, and imagine them as being God’s. But why is God angry in this Psalm?

When we look closer at Ps 102, anger is related to bad fortune more than emotion. In other words, the psalmist believed God was in control (more or less) of what happened, and to speak of God being angry was simply a way of saying that bad things were happening. There is no indication that the psalmist is imagining the inner emotional state of mind of God. “Anger” is simply shorthand for misfortune. It does not refer to an emotional state of being within God.

The line of reasoning is that because God guides everything, when bad things happen, then that is God’s doing. In the modern world we have reasons to question whether this premise is correct – does everything that happen emerge in some way from God’s will? Again, there are good reasons to think they do not. But if we want to understand what the ancient people who wrote the Bible were thinking, then for a time we can suspend our disbelief, and imagine what it would be like to think in ways differing from how we actually think.

Does God get angry? Anger typically is a way that the Bible speaks of God’s reaction to injustice (although perhaps not the case for Psalm 102). Again, this does not typically refer to anger in a human sense, but as something very different. I suggest God’s anger is entirely not like our anger. If our anger is the only type of anger we really know, and God’s anger is completely different to our anger, the meaning of the word “anger” begins to break down when it comes to God. However, we need a way of speaking of God’s rejection of injustice, and it might be that saying God is “angry” is as good as we can do, even though it is not precisely accurate.

[1] In Hebrew most of the verbs are in the perfect tense, which could be taken to refer to the past. Unfortunately, tense in Hebrew is not as clear concerning temporality as tense often is in English.