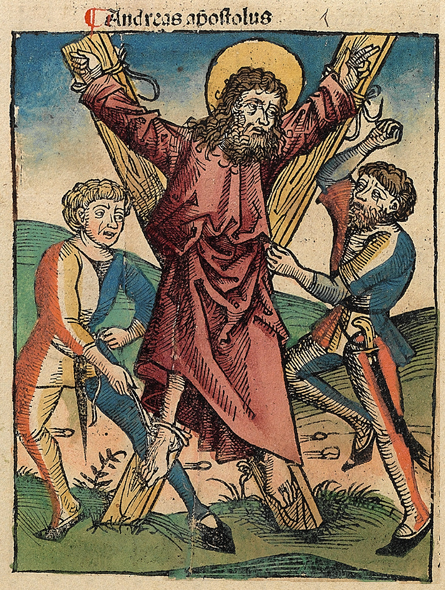 On November 30, we honour the memory of an apostle named Andrew. The Gospels say that he was a fisherman and the brother of Peter, and his name always appears near the top in the lists of the twelve apostles. The Fourth Gospel pairs him with Philip in answering the Lord’s questions at the feeding of the five thousand and later in acting as an intermediary for some pagans who wished to meet Jesus. But that is all: Andrew’s story is no sooner begun, than it is swallowed up in the greater story of Jesus.

The people of the Church later invented legends about Andrew, to give their memory more than just a name to honour and more than just a single episode to recount. These legends gave Andrew exotic adventures travelling and preaching in many different places until he was martyred, crucified on a cross in the form of an “X.” Some of these legends may indeed be true, but biographical truth is not their purpose or function. So we come back to the gospels and their brief account of Andrew’s
calling.

And that is how we honour the memory of the apostle named Andrew: by remembering his name as we tell the story of Jesus, the One who called both Andrew and us into the story of salvation.

Martyrdom of Saint Andrew in the Nuremberg Chronicle

This is a part of a scan of an historical document: Title: Schedelsche Weltchronik or Nuremberg Chronicle