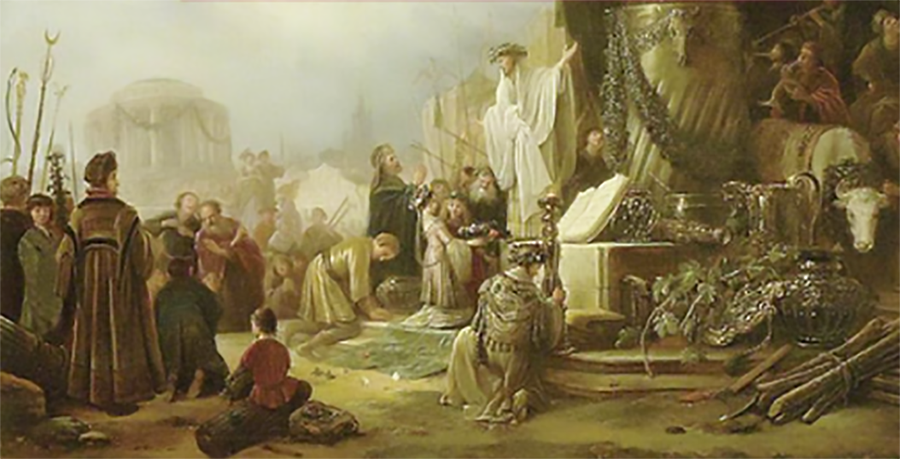 There were twelve apostles, and then some — some others who never belonged to the original companions of Jesus, but who were also called apostles because they were “sent forth” to proclaim the gospel. Saint Paul was one of these others; so was the person we honour on June 11, the apostle named Barnabas.

The Book of Acts says that he was a Jew born in Cyprus, but that he was living in Jerusalem when he joined “the company of those who believed in Jesus.” His real name was Joseph; the apostles called him Barnabas, or “Son of encouragement,” because “he sold a field which belonged to him and laid the proceeds at the apostles’ feet.” By this act Barnabas encouraged the rest of the disciples to provide for the good of the whole community.

According to the Book of Acts, Barnabas was the one who introduced Paul to the twelve apostles. Later on he moved to
Antioch and sent for Paul to help him lead the Church in that city. From there Paul and Barnabas set out on a great missionary journey through the cities of Asia Minor and Greece. The two men had a falling-out over Mark, who wanted to abandon the mission. Barnabas returned to Cyprus with Mark, and Paul went his separate way.

Paul himself mentioned Barnabas several times in his Letters, which suggest that he, not Barnabas, was the senior colleague. Paul also gave a more serious reason for their parting company. It happened at Antioch, when Peter went back on his promise to treat pagan converts as equal with Jewish converts. In the acrimonious debate which followed Barnabas separated from Paul and sided with Peter.

We do not know whether Paul and Barnabas were ever reconciled; an ancient tradition testifies only that Barnabas spent the rest of his days preaching in Cyprus.