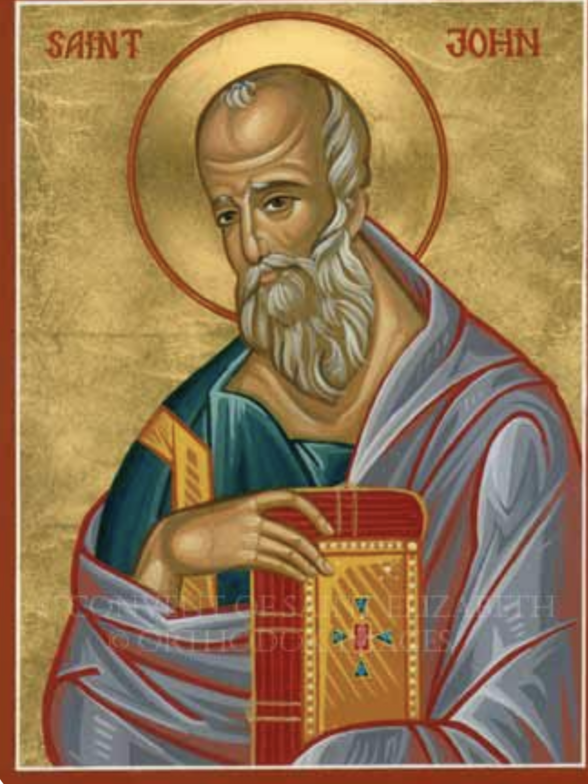 On May 6 (or December 27) we honour Saint John the Apostle, a Galilean fisherman who was called with his brother James and followed Jesus to become “a fisher for people.”

John and his brother were so impetuous in their behaviour that Jesus nicknamed them “Bo-aner’ges” or “Sons of thunder.” Nevertheless, with Peter and James, he was one of the three disciples that Jesus chose to have with him on those occasions when he wanted people he could trust. This side of John’s character is heightened if he was “the beloved disciple” mentioned in the Fourth Gospel — the disciple who lay closest to Jesus at the Last Supper and into whose care the crucified Lord entrusted his mother. According to the Book of Acts, John later became a pillar of the church at Jerusalem and shared the leadership with Peter.

A reliable tradition says that John eventually settled at Ephesus, a city on the Mediterranean coast of Asia Minor. There he superintended the Church and gathered a lively circle of students, who had great influence on Christian life and thought throughout the region. Out of this “community of the beloved disciple” came the Gospel and the three Letters which are attributed to John in the New Testament. These writings display a side of John which we would not expect from the other accounts of him. Instead of the impulsive “Son of thunder,” the Gospel and Letters of John reflect the mind of a fine theologian who meditated deeply on the mystery of Christ and expressed his understanding in a poetical manner.

Many scholars have argued that John the fisherman-apostle and John the theologian-evangelist were really two different people. It has even been shown that the text of John’s Gospel passed through the hands of several editors before it reached the form in which we now know it. But scholars have also recognized that “the Johannine tradition” gives independent information about events in Jesus’ life which may be more accurate than some of the information available in the other three gospels. This suggests that the recollections and teachings of John, the fisherman turned apostle, did indeed provide the basis for the New Testament writings which bear his name.

From "For All the Saints"