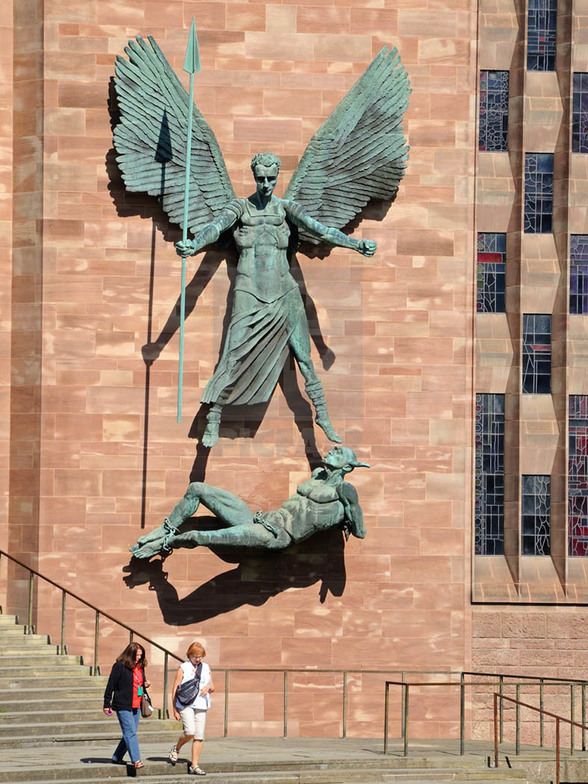 My home town of Coventry, houses an Anglican cathedral dedicated to St. Michael and All Angels. A huge depiction of Michael victorious over Satan is the image that you first see when arriving at the west door of the cathedral. It was built and dedicated in 1962, following the destruction of the medieval cathedral during the Second World War.

Michael is one of only four angels named in the Bible, Michael himself being mentioned four times in Daniel (twice), in Jude and Revelation. In Revelation Archangel Michael is presented as the powerful agent of God warding off evil from God’s people and delivering peace to them at the end of our earthly life.

A following for Michael originated in Phrygia, where he was venerated as a healer and many hot springs were dedicated to him in Greece and Asia. Michael was commemorated in the western church as early as the seventh century although there is evidence to suggest he was honoured from the beginning of the Christian era and was also venerated in the Jewish faith tradition. It is suggested that the African American song ‘Michael row the boat ashore! Alleluia’ speaks to the ancient tradition that Michael was the receiver of the souls of the departed.

‘For all the saints’ suggests that September 29 (the feast day of St Michael and All Angels) is an occasion to celebrate those whom scripture calls angels. The word angels comes from the Greek word meaning ‘messengers’. Such messengers may be invisible or invisible, human or otherwise.

Often chapels and churches dedicated to Michael are to be found on hill tops and mountains.

In some traditions Michaelmas has been a time for ordinations in the Church of God and in some universities in the United Kingdom the term that begins at this time of year is given this name.

It is suggested that Christians may always been attended by so called ‘healthful spirits’ which have been depicted in art in human form. Characteristically they are often shown with wings (to demonstrate) they are not constrained by time and space, with swords to demonstrate their power, and with dazzling raiment to show their ability to enlighten human beings.

The jury is out on whether angels exist or not, some being sure they do not, others certain that they do. In my experience there have been a number of unusual encounters with people and on one occasion a powerful green light which pointed the way to something or someone. Often these encounters were signs of encouragement and in the case of the green light a sign that someone we knew was dying and yet all was well.

At the present time seeking the support of Michael against the Covid-19 virus seems a reasonable way forward. The virus is not evil in itself but has led to untold misery, death and hardship in our world and continues to do so on a daily basis.

All of us have been fearful for ourselves, our loved ones and our communities as a whole. As individual parishes we have tried to figure out a way to re-open our churches putting in place the safety protocols. This has led to split congregations, with some able to join in-person worship and others needing to stay at home for their safety and protection.

One of the essential qualities of the Christian journey is that followers of Christ never make their journey alone. First and foremost, Christ is with us throughout our pilgrimage. Next, we journey with our fellow worshippers as well as those who follow Christ throughout the world. We also journey, I’d suggest, with the saints who have travelled before us, in our lives and in the 2000-year tradition of the Christian church. Michael is one of the many, many saints whom we know about through their influence on the church. Saints if you like, are role models, people we might seek to emulate in our journey as we seek to be faithful and dedicated to Christ and his church.

We all know that Covid-19 and its limitations upon our lives is going to be with us for months to come. There are no quick fixes or easy answers. We all have to be careful in our actions to safeguard our loved ones as well as others. At the same time, we have much to be thankful for, given the way our Province has been led by Dr Bonnie Henry, our Health Officer. Her leadership (which has come with costs to her team as well as well as herself) gives us all the best opportunity to stay well and keep others safe too. Perhaps looking to the leadership of St. Michael in his role as a healer who directs us away from all that is evil and gives encouragement to continue in our journey in companionship with all those who follow the way of Christ.