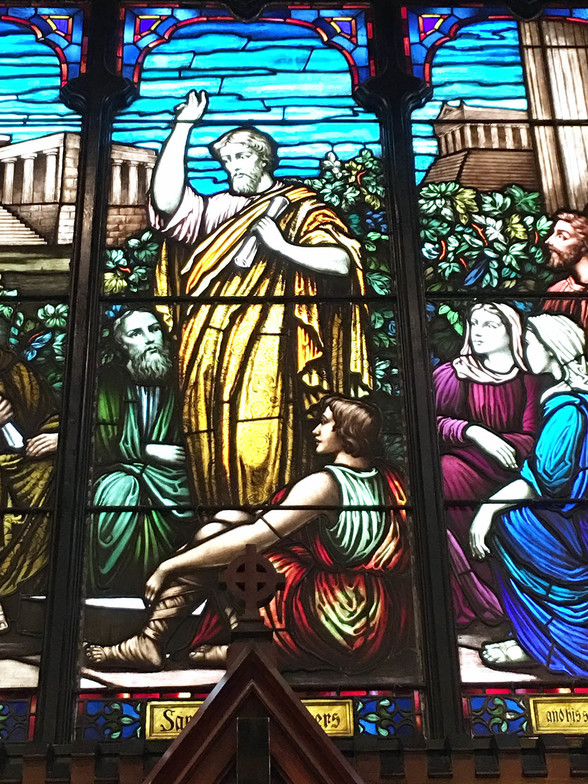 : to incite by argument or advice : urge strongly exhorting voters to do the right thing
intransitive verb

: to give warnings or advice : make urgent appeals

Some twenty years ago, a fellow parishioner told me that we needed to hire a curate to go around the neighbourhood high-rises exhorting people to come to church. Without increased attendance, leading to increased revenues, the parish, he thought, would not survive. His concern was well-founded, although parish survival was ultimately secured by an unforeseen providential source of revenue.\

My friend expressed his point rather crudely, as if the parish were a commercial enterprise looking for customers, but many others make the same point in more measured terms, citing many handy scriptural texts to support their claim that preaching the Gospel implies exhorting people to convert.

The continual anxiety around the need, and duty, to make new converts is long-standing.  My own memory goes back to the immediate post-war years in England when the Christian Commandos were given the task of shaking people out of their indifference to the Church.  They did not succeed, so the Mission to London took up where they left off, with no more success.  Shortly after that, Billy Graham came to England to call us to Christ and to warn us of the dangers of godless communism.

Over the years one campaign succeeded another while church affiliation in England fell relentlessly.  We can observe the same trend in Canada, with perhaps a generation lapse, and even in the United States, but with a longer lapse. It is common to all Western nations (but not, it seems, to China and nations in Africa and Latin America).

The main reaction to campaign failures over the years has been to question where we have been going wrong.  According to this view, if we could only find the right approach all would be well, and we would be able, to put it in current jargon, ‘to grow the church’.

But there is an alternative explanation: we are victims of our circumstances, the circumstances being that in Canada we live in a society which is pervasively secular, with no God-spot, and most of our neighbours regard religion, of whatever kind, with indifference.

Living in a secular society is not without its advantages. The churches do not have an incestuous, mutually-dependent relationship with the state and do not have to take a prurient interest in the sex lives of others. We can set our own agenda, which includes criticizing the state on behalf of the disenfranchised.  Even so, secularism inevitably affects how we preach the Gospel.

The reason why secularism is dominant is a matter of debate, but failure on the part of local churches is not one of them. On the other hand, acting as if a major reversal were about to happen can lead only to disappointment and disenchantment, so we need to adopt a new strategy. Developing a complete strategy is not something to be done in the space of a short article, and I will limit myself to one point: our new strategy should be characterized by attraction not exhortation.

In the recent past we have exhorted others, trying to persuade them to accept the Faith. Exhorting implies fighting against the prevailing culture of secularism and indifference. Attraction, by contrast, avoids that stumbling block.  We can allow events to take their course.

A person attracted by the beauty or mystery or consolation of our liturgy, or by our work in helping each other and in seeking a more just economic system, does not first have to surrender their currently-held beliefs and attitudes. They can respond to what we offer without first worrying about their reasons (or our arguments) for doing so. We, and they, can then deal with the theology in due course.

This was the strategy adopted by St. Paul in his missionary journeys.  In each city, he first addressed the Jews, and then he addressed the ‘God-fearers’, those Greeks and Romans who had been attracted to Judaism but who felt unable to accept its more demanding requirements (like circumcision) and so remained unconverted. Among them, St. Paul found eager new followers for Christ.  By contrast, when he went to the market place seeking to persuade the uninterested, as he did in Athens, the outcome was less to his wishes.

We have concerned ourselves too much with the Athenians of our day. Let us instead turn our attention to the many people who are attracted by and interested in what we do, those who see our light shine and give glory to our Father in heaven. When, as will inevitably be the case, the culture of our society becomes more sympathetic to our cause, we can go back to exhortation.