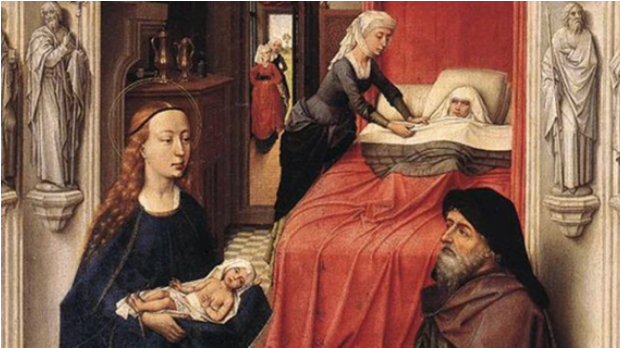 The birth of Saint John the Baptist is told in the Gospel according to Luke, where it serves as a bridge between the Old Testament and the time of Christ.

The initial focus of Luke’s account is Zechariah the priest and his wife Elizabeth; and the evangelist draws on phrases and motifs from the Old Testament in order to associate them with Abraham and Sarah. Like those ancient figures, the parents of John the Baptist were righteous but childless. Moreover, Elizabeth herself (like Sarah) was well past menopause, so that according to nature she was no longer able to conceive a child.
But just as God intervened to make Abraham and Sarah have a child and become the forebears of the chosen people, so an angel announced to righteous Zechariah that he and his wife were to have a son who would be the forerunner of the Chosen One, the Christ. So it came to pass that Elizabeth conceived and gave birth to a son, whom she named John. Then his father Zechariah prophesied, saying,

You, my child, shall be called the prophet of the Most High, for you will go before the Lord to prepare his way, to give his people knowledge of salvation by the forgiveness of their sins.

Zechariah also saw that his son’s mission would prepare the way for the fulfilment of God’s oath, the oath which he swore to our father Abraham, to set us free from the hands of our enemies, free to worship him without fear, holy and righteous in his sight all the days of our life.

Thus, according to Luke, the birth of John the Baptist gathered up and embodied the whole truth of the Old Testament and made it ready for its own perfection in Christ Jesus, the One whose way John was born to prepare.