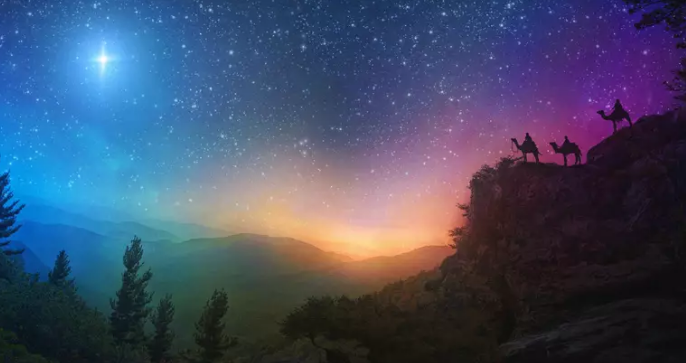 On January 6 we commemorate an episode which is recorded in the Gospel according to Matthew — the epiphany or “manifestation” of Christ to “wise men from the East.”

Such “wise men” were the high priests of an occult religion whose chief centres lay in Mesopotamia. They were supposed to have special insight into the ways of nature, interpreting dreams and reading the stars in order to determine the will of their gods. But then the appearance of a strange star in the heavens manifested to them the birth of “the one who is born king of the Jews.” So much their learning in the ways of nature told them; but they needed to go to Jerusalem, to those who were learned in the Jewish Scriptures, in order to locate this king. In Matthew’s view, true knowledge of salvation was from the Jews, but it was a knowledge now available to the Gentiles as well. The star of Bethlehem was an evangelical symbol. Because it manifested Christ to the wise men and brought them to worship him, it represents the proclamation of the Gospel to the pagan nations outside Israel.

If the star of Bethlehem symbolizes the Gospel, the wise men symbolize something equally important — the obedience of the Gentiles, in contrast to the anxiety of the rulers and official teachers of Israel. The wise men started with nothing more than their learning in the ways of nature; and yet this same learning enabled them to respond to the light of divine revelation. The Christian tradition has seen in this story a sign of hope for everything that humans know and endeavour by the light of nature. For it means that no truth or wisdom in the created order is contrary to the revelation of God in Christ. On the contrary, so far as humans are obedient to the light they possess by nature, God will complete it and manifest its fulfillment with “the truth as it is in Jesus.”

We have seen his star in the East, and have come to worship
him. Matthew 2.2

Eternal God,
who by a star
led wise men to the worship of your Son,
guide by your light the nations of the earth,
that the whole world may know your glory;
through Jesus Christ our Lord,
who lives and reigns with you and the Holy Spirit,
one God, now and for ever.