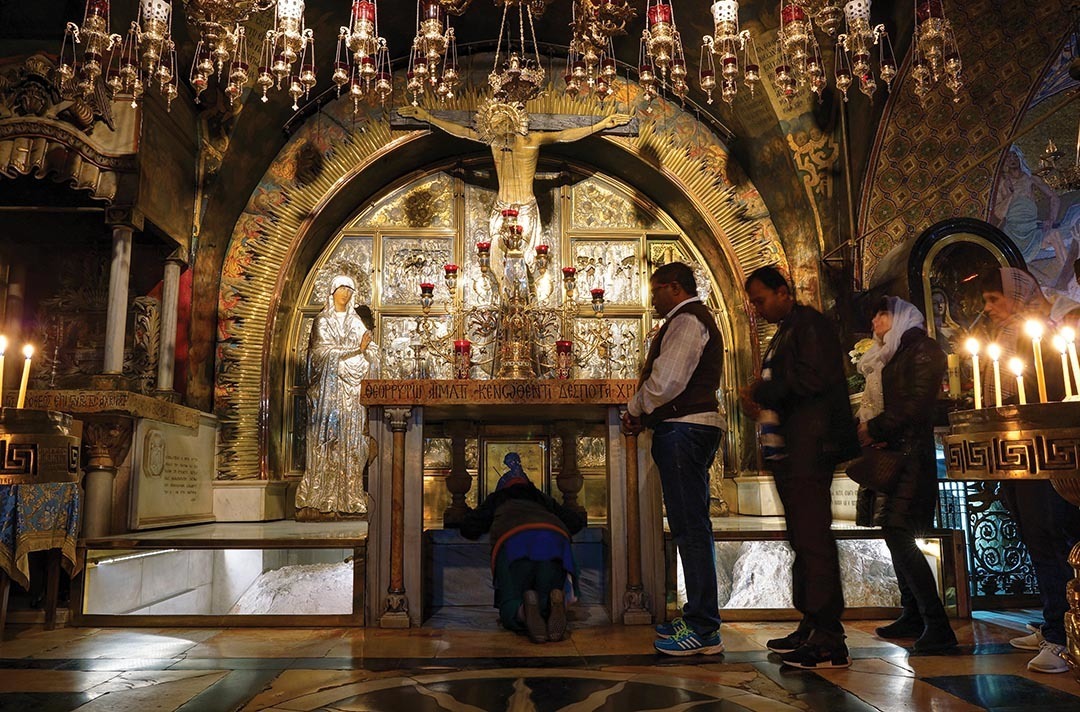 We had come to Jerusalem in January, knowing that we would be there for almost four months, an academic term in the life of St. George’s College. My responsibility was to travel around the area with groups of clergy from many places in the Anglican communion, linking various places with the Gospel passages where they are mentioned, and suggesting ways in which their preaching might feature these places.

You can perhaps appreciate how and why I treasure those few fleeting months in my life. However, as with everything in life, the time came for it to end. It was a Sunday afternoon; all our things were packed, ready for an early departure the next morning. We had some free time before the evening meal. How would we spend our last few hours in this ancient city?

The decision was not difficult. We walked from the College down Nablus Road to the Damascus Gate. Entering the Old City, we found ourselves in the labyrinthine network of streets that forms the souq (open market) until we suddenly turned into the area that fronts the entrance to the huge Church of the Holy Sepulchre. We stood for a moment at the slab of stone where long tradition says that Joseph of Arimathea and others anointed Jesus’ body for burial. Then we climbed a flight of stone steps to the place where we wished to spend our last afternoon in Jerusalem.

I had been in this place many times with clergy from the college. It had come to captivate my wife Paula and I more than any other place in our travels around the Holy Land. To explain why, I need to share with you something of the long story of this place, and to describe our surroundings.

Long before the towers of Canterbury stood above the fields of Kent, long before the Dome of the Vatican dominated the cityscape of Rome, the Church of the Holy Sepulchre stood here as witness to the imperial instincts of Constantine and the piety of his mother Helena. In the fourth century, she had come with all the authority of her position and title to seek for the sites of the death and resurrection of Jesus. What she encountered was the local Christian community. They had preserved the memory of where the Lord had been crucified, and the location of the tomb from which he had been raised.

Actually, there had been an earlier visitor on the same quest. In the year 160 CE, a bishop named Melito had come from the city of Sardis to verify the places in the Gospels. He, too, had been led by the local Christians. Two centuries later, when Helena in her turn was shown the venues sacred to Christian memory, she brought to bear the vast resources of her son’s empire to build this massive shrine over them. Ever since, this huge church has been the focus of memory and pilgrimage for most of the Christian world.

We climb the flight of stone steps and find ourselves in a small, highly ornate, dimly lit chapel. The focus is the altar. Here, day after day, year after year, pilgrims come from far and near. On one wall of the chapel, there is a stone ledge that can serve as a seat. So we sit and watch as people do the simple actions that we ourselves have done in this place. We watch as people drop to one knee, making the sign of the cross. We watch as a mother lifts a child to kiss the icon near the altar and then kisses it in turn herself. We watch as pilgrim after pilgrim kneels on the floor before the altar, then moves forward underneath it and extends an arm down through a small opening to touch a rock beneath.

No ordinary rock, this is the top of an outcrop that rises from the floor of the stone quarry that lies far beneath this great basilica. Into its surface, the upright of our Lord’s cross would have been embedded. Here the crosspiece that he had carried from the nearby city gate was fastened. Here our Lord died.

This is where we wished to be on our last day in Jerusalem. When the last pilgrim of the day had passed through, we stood and moved to the altar to do again what we wished to retain as a lifelong memory. Taking turns, we knelt on the floor, stooped under the altar, leaned forward, and extended an arm into the small opening until we could feel the hard surface of the rock.

So much pours into the mind at such a moment that words cannot do justice to the experience. We get up, turn, cross the chapel to the stone steps and leave. Yet there is a sense in which we have never left this holiest of places.

Stock Photo ID: 657659550 Pilgrims in the Calvary Chapel in the Church of the Holy Sepulchre
Photo: Serge Yatunin

Herbert O’Driscoll’s latest book – and perhaps his most eagerly anticipated after more than fifty previous volumes – is a collection of autobiographical reminiscences, entitled I Will Arise and Go Now.  The subtitle is Reflections on the Meaning of Places and People.  Altogether, there are almost a hundred short memory pieces, organized roughly chronologically, but ranging widely across both time and space.  They cover his youth in Ireland, his student days at Trinity College Dublin, his four-decade ministry in Canada, his extensive experiences in the United States, and his later years of pilgrimage, especially in Holy and Celtic Lands.

The book was published  February 17. The book (with a Canadian price of $26.99) will be available in local bookshops and online.  It’s published by Morehouse Publishing of New York, an imprint of Church Publishing Inc. (follow the link).   If your preferred bookseller doesn’t have it in stock, encourage them to order it from the Canadian distributors, Parasource: https://www.parasource.com/catalog/category/view/s/books/id/15/.  Watch also for news of “virtual readings” at bookstores and parishes in various locations.