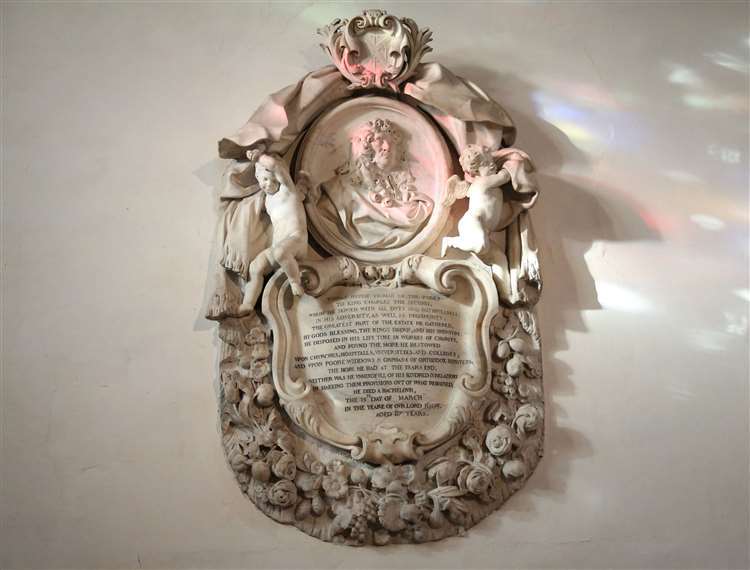 Jesus College, founded in 1496, is a constituent college of the University of Cambridge in England. It is exceptional in having a Master, Sonita Alleyne, who is a woman and who is Black. She is the first Black woman to be Master of a Cambridge college.

Tobias Rustat was a benefactor of Jesus College.  He was a courtier to King Charles II and his memorial in the form of a stone plaque is mounted on the west wall of the college chapel.  Last year, the college authorities decided that the memorial should be removed from the chapel and located elsewhere in the college.  They wanted to dissociate themselves from Rustat’s involvement in the transatlantic slave trade which, they claimed, was the source of his benefaction.

A group of graduates of Jesus College opposed the removal, counterclaiming that whatever profit Rustat had made from the slave trade had accrued twenty years after his donation, and five years after the completion of the memorial, and could not have been the source of the benefaction.

To remove the memorial, the college authorities had first to obtain permission from the Bishop of Ely because the chapel is a listed building. The bishop passed responsibility for deciding the matter to Michael Hodge, his Deputy Chancellor, and in a judgment that runs to 108 pages,[i] Hodge sided with the opposers and denied permission.

Hodge was at pains to point out that he was not excusing Rustat’s involvement in slavery, but he accepted the opposers’ argument about the timing and source of the benefaction.  He suggested, further, that keeping the memorial in place (and knowing of Rustat’s involvement in the slave trade?) may lead us to reflect on our own involvement with modern slavery associated with, for example, cheap consumer goods from developing countries.

The Rustat memorial is not the only memorial in Jesus College Chapel.  As in most, if not all, Anglican churches, there are several memorials, one being for the revered, Thomas Cranmer.  In his judgment, Hodge addresses the question: ‘If Rustat why not Cranmer?’  To put it more explicitly: “Is a man who invested indirectly in the slave trade worse than a man who sent soldiers to kill communities that wanted freedom to worship as they wished, and who was instrumental in the execution of three defenceless and essentially innocent young women?”  Those wanting freedom of worship refused to use Cranmer’s newly-published Book of Common Prayer; the young women were three of the wives of Henry VIII.

The questions raised by this affair will resonate with us all.  We may look at the memorials in our own churches and find it easy, no doubt, to identify many artefacts memorializing persons who are now judged to be of dubious standing and integrity because they pursued evil and abhorrent policies and practices, slave trading among them.  What are we to do about them?

Simply removing a memorial is the easy answer.  We can forget about it and move on.  If the person memorialized practiced, or had connections with, slave trading, those of us who still enjoy the benefits accruing from such practices can continue to do so without being reminded of their provenance.  Those of us who were the victims of slave trading may continue to live, as before, without recompense for our suffering.

Alternatively, we may leave the memorial in place and draw attention to it in order to reflect on what may be our own involvement with transgressions of like kind and find ways of correcting them. This was the course proposed by the Jesus College authorities who had intended to re-locate the memorial within the college with other archival material where it would have instructed visitors on the history and legacy of enslavement.

In his judgement Hodge cites the words of the novelist L. P. Hartley: “The past is a foreign country: they do things differently there.” That being so, we must begin, I suggest, by learning the ways of that country, not in order to follow them but to understand them and remember some of the things that we may conveniently wish to forget.

We must bear in mind also that sometime in the future we will be the past, and our descendants will have learned new ways.  What will they find in our ways that they will look back upon and for which they will revile us?  One day our own memorial may be at risk.