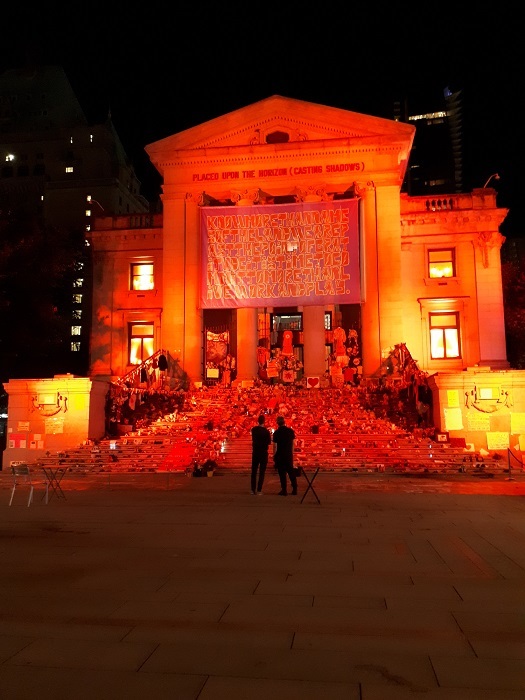 Some time ago, I volunteered for a few shifts as a “guardian” for the art installation in honour of the children who died in residential schools, present on the far steps of the Vancouver Art Gallery since May or June of 2021. Being a guardian involved sitting under a tent by the site, keeping an eye on it, tidying it, joining (as appropriate and invited) in acts of prayer led by Indigenous people, and engaging in conversation with curious passersby.

I was invited to the work by Audrey Siegl of Musqueam nation, and was happy to take it on, particularly as a white person. It was important for someone who looks like me to be available for some of the difficult conversations that could arise so that Indigenous guardians and folks in mourning had the space to do the work of healing they needed without being accosted or interrogated by others.

A lot of the people who approached me to speak were immigrants. While Sikhs and a group of Baháʼí brought prayers, posters, solidarity, love to the sacred space – they understood what it meant to be persecuted by state and religious institutions – others who were recently arrived or only here for a short time had many questions. I was heartened by the fact that for most, the questions were about how to do the work of reconciliation in their own lives.

When I wasn’t talking, re-arranging shoes and toys, or re-lighting tealites, I sat and listened to jokes and stories from the other guardians. Drums and the beautiful smells of traditional medicines were omnipresent. For the one overnight shift I did, I remember capturing the lull of 3am in a short video on my phone of the installation, bathed in orange light, with the faint sounds of another guardian’s powwow music in the background. I also remember playing my bodhran and lifting my voice in the Women’s Warrior Song alongside others to drown out the voices of street preachers who had come to proselytize one Saturday afternoon.

It was an honour to be among those who were called for this work, and yet so much of it reminded me of how much remains to be done. Indigenous peoples in Canada are still overrepresented in our carceral system and in the foster system. They are still denied clean water and air, as well as access to traditional hunting and ceremonial lands. They are still subject to abuse, violence, and murder. They still bear much of the brunt of climate-related catastrophe, not just in Canada but across the world. They are still treated as second-class citizens…or even worse.

For many of us, the will to do better is there, but we might not be well-educated on how to do so respectfully. We may even be uncertain what to do or say at all. Education through book studies and other means is of course good, but eventually we’re going to have to take the risk of developing real relationships. It is only real relationships based in mutual trust and shared understanding that create lasting change.

It's therefore my pleasure to invite you to explore Indigenizing Canada: Truth and Reconciliation and Next Steps in Canada, a series of online discussions with Professor Ray Aldred, director of the Indigenous Studies program at VST. Meetings will be held April 13 and 27, and May 4 and 11 at 4.30pm to conclude by 6pm. These meetings are free and all are welcome. Although the offering is free, registration is required.

More information and registration details can be found at this link.