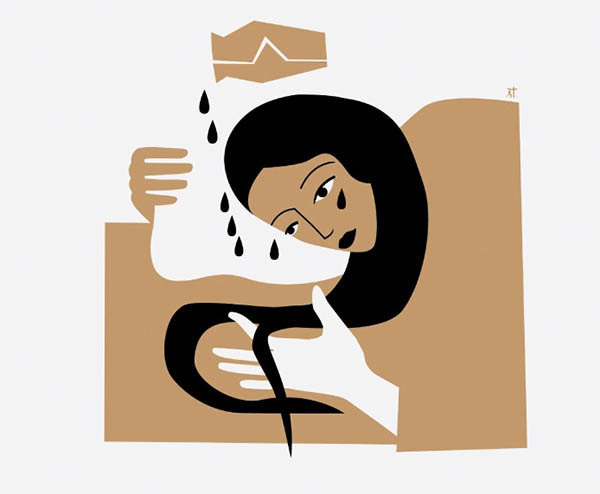 Luke tells a story of Jesus enjoying a meal with a Pharisee, when a woman arrives and wipes Jesus’ feet with tears and ointment. The Pharisee is scandalized, and Jesus responds by telling a parable, and then speaking words of forgiveness to the woman (Luke 7:36-50).

A Question of Sources

Mark also tells a story of a woman anointing Jesus. However, she does not anoint his feet but his head. The timing is also very different: in Mark this episode occurs shortly before Jesus’ death, while in Luke it occurs much earlier in Jesus’ ministry. The story in Mark is not about forgiving a sinner as it is in Luke, but about devotion and a prophetic understanding concerning Jesus. Matthew follows Mark; the episode is placed in the same time frame, and the all the important details are the same. John is a strange mix of details of what we find in Luke and Mark. Agreeing with Mark, this event happens shortly before the passion. Also agreeing with Mark, in John this story is not about the forgiving of a sinful woman, but about a woman who is prophetically anointing Jesus “for the day of his burial” (John 12:7; compare with Mark 14:8, and Matthew 26:12). However, John agrees with Luke that the woman anoints Jesus’ feet, and not his head. To my mind, the parallels in John provide some of the more compelling evidence that perhaps John knows the synoptic tradition.

Has Luke taken a prophetic act by a strong and courageous woman and turned it into a story of a loose woman being forgiven? Has Luke robbed this woman of her leadership role, subjugating her into the role of a deviant who needs forgiveness? Does this reflect a bias against women on the part of Luke? Many scholars believe that it does.

If we remove the ointment from the story, then what is left is very different from what we have in Mark, which is one of Luke’s key sources. What is left is the story of a sinful woman, coming to Jesus, weeping and cleaning his feet with her tears. It is a strangely erotic act. Imagine Jesus reclined with his feet outwards, after the fashion of meals of the day. Now imagine a woman gently laying right next to Jesus’ feet and gently wiping his feet with her tears and hair. I for one would probably be troubled, just like Simon, his pharisaic host!

Luke’s story is radically different from the anointing stories in Mark and Matthew. The only thing that suggests that it somehow may be linked, in terms of source criticism, is the ointment. Without the ointment, I think we would not have a great deal of problem suggesting that this story is not the same story as what is found in Mark, and that Luke is leaning on another tradition – perhaps “Q,” or the so-called “L.”

What I propose, is that perhaps Luke had a distinct story about a sinful woman washing Jesus’ feet with her hair – a version that says nothing about ointment. He noted a surface similarity with the story of the woman anointing Jesus with oil in Mark and decided to conflate the two stories. He added into this story the ointment from the Markan story. Having utilized that detail from the story in Mark, it would have been redundant for him to replicate the story again in his narrative in the week before the passion, so he dropped the Markan version from his narrative, having taken the key element of ointment from it.

Does this absolve Luke of the charge of being a misogynist? If my reconstruction is correct, then Luke is not transforming the prophetic sign act of the strong woman in Mark into a weaker instance of a sinner being forgiven as much as he is preferring one story over another.

That being said, I think that perhaps we might not be quite grasping the nuance of “sinners” in the Lukan corpus. It is no small thing to be a forgiven sinner in Luke. It is Luke’s Gospel that has Jesus say, “I tell you, there will be more joy in heaven over one sinner who repents than over ninety-nine righteous persons who need no repentance” (Luke 15.7, 10). Perhaps the best example is found the Acts, the sequel to the Gospel of Luke. There Paul/Saul is a raging sinner opposing the new Christ movement with all that is in him, but once forgiven, this same man becomes one of the key heroes of the book.

So, being a repentant sinner in Luke is not a demotion. It is an honor – something to emulate.

The woman shows up and is weeping at Jesus’ feet. Simon, the host of the dinner party, is troubled, and as I mentioned, understandably so. “Surely,” he thinks, “this man knows what sort of woman this person is – how can he just sit there and permit this indecent display!?!”

Jesus then goes on the attack. Speaking to Simon, he says, “Do you see this woman? I entered your house; you gave me no water for my feet, but she has bathed my feet with her tears and dried them with her hair. You gave me no kiss, but from the time I came in she has not stopped kissing my feet” (7:44-45).

Some have suggested that Simon had grossly mistreated Jesus with a failure of hospitality. The argument goes that it was common for hosts to wash feet and greet guests with a kiss, and that Simon, by not doing these things, sinned against Jesus. I think this sort of interpretation buries the strangeness of the story. John Nolland writes, “To provide water for guests to wash their feet after travel is well attested … but is not indicated in Jewish literature to be a normal provision for guests.”[1] This means that such behavior is not the expectation, meaning Luke is not emphasizing that Simon failed in his duty as a host, but that the woman’s actions possessed a certain extravagance. The woman, who had (presumably) never actually met Jesus had a deeper connection with him than Simon who had. She “got” what Jesus was about. There was a deep drama playing out in her. Simon was so worked up about propriety that he missed the sacred drama unfolding before him.

Jesus concludes his conversation with Simon by declaring, “her sins, which were many, have been forgiven; hence she has shown great love. But the one to whom little is forgiven, loves little” (Luke 7:47).

I don’t think we should assume Jesus is speaking ironically. That is, there is no reason to argue that Jesus is suggesting that Simon hasn’t really been forgiven, or that his sins really are not really “little.” Some wish to suggest that Simon was just as bad a sinner in his own way, but that he did not recognize his error like the woman did. In short, that he was like the Pharisee of Luke 18:11-14, who declared his own righteousness but did not return to his house “justified” as did the repentant tax collector. Simon does not parallel the Pharisee of that parable well. Simon does not proclaim his own righteousness and is only challenged by Jesus because he was not extravagant in his hospitality in a way that paralleled the woman. In a way, Jesus was being unreasonable in his response to Simon, and this makes the story jarring (and interesting).

The Woman and Forgiveness

Jesus turns to the woman, and says, “Your sins have been forgiven you.” Some at the table are troubled because Jesus presumes to forgive sins. But they (along with most readers it seems) are not paying attention to the grammar. This statement is in the perfect tense, not the present. The perfect tense speaks of something that happened in the past with direct implications for the present. This means that the forgiveness of which Jesus speaks has already happened for this woman. She has already been forgiven. The other grammatical detail that is often missed is that this statement is in the passive voice. The passive voice can be a way of saying something without identifying the subject doing the action. “You have been forgiven” does not actually say who the one is who is doing the forgiving. This can be fixed by adding a “by XXX.” “You have been forgiven by God” – “You have been forgiven by me.” As it is, the agent doing the forgiving is not stated, although it seems to me most likely that Jesus is declaring that the woman has been forgiven by God.

Jesus ignores the peanut gallery complaining about his actions and continues speaking to the woman: “Your faith has saved you; go in peace.” “Being saved” is also in the perfect tense, suggesting that whatever this refers to, it has already happened. Jesus is affirming for the woman (and for us) that she has already received salvation and forgiveness.

[2] In Luke 5:23 Jesus says to the paralytic “your sins have been forgiven you” (ἀφέωνταί σοι αἱ ἁμαρτίαι σου). This is also in the perfect tense. This contrasts what we see in both Mark and Matthew, which have Jesus forgiving the paralytic using the present tense.