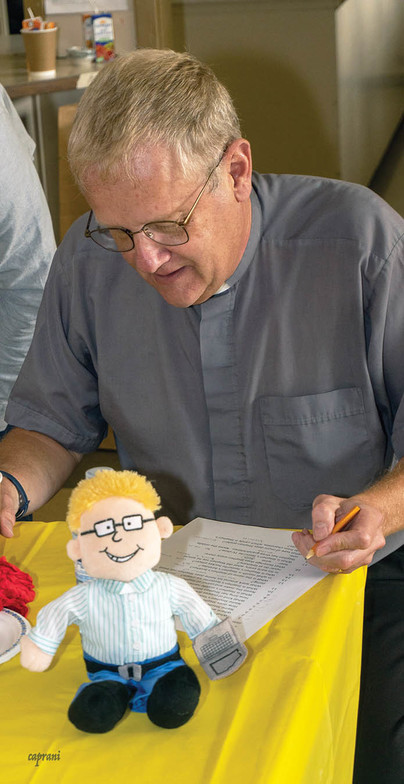 When I was ordained in 1986, there was a priest in our deanery already in his 80’s. This was in the Church of England, and he had freehold. This meant the priest could remain in post whilst he was still living! The fact that he had been appointed rector of the parish in 1945, didn’t seem to be encouraging him to retire.

This man came to mind last week as I passed a milestone of my own, 20 years as priest of the Anglican Parish of the Church of the Epiphany, Surrey ('Epiphany'). In 2001, I was appointed to a part-time, temporary posting, until I found a new job or the parish filled the vacancy. That did happen the following year and the rector has remained in place ever since.

My dad, also an Anglican priest, served one parish for 24 years and it hadn’t crossed my mind that I might one day get close to that number, but I seem to be en route.

Over the years the role has changed a number of times as I became full-time, was appointed rector, and as other opportunities emerged for me within the diocesan fold. There are a number of reasons why I've stayed.

First and foremost was (and still is) the vitality and dedication of the community at Epiphany. So many people have taken informal and formal roles of leadership and always there has been a desire to move forward, to constantly hold before us a sense of vocation for the parish as a whole to serve God in a realistic and meaningful way. Secondly has been a willingness to work together without factions or pulling in different directions. Although there have been times when it seemed perhaps I should move on, there always seemed to be a pull back to continue with the ministry where I had been given responsibility.

Two other factors played a profound role in enabling me to stay. First, it seemed to me that the building was beyond repair and needed to be replaced. That was in 2005, and although no new church has appeared to date, this vision remains at the heart of our vocation as a parish. To undertake mission and ministry in a worn out, decaying facility, is just not good enough for God or for God’s people.

The second has been the advent of a second language group finding their home at Epiphany. For over seven years Arabic-speaking (Chaldean) people have attended Epiphany. At present as we ‘livestream’ services, the English and Arabic-speaking members of the congregation are often 50/50 in proportions. The impact has been profound and has encouraged the entire community to prioritize hospitality; it has made the parish stronger, more focused on our neighbourhood, and more vibrant. We would be a shadow of ourselves without this significant and faithful part of our congregation.

The last 18 months have been a challenge for all our parishes, and without Zoom, ministry would have been extremely difficult to achieve in any shape or form. What has humbled me more than anything has been the sacrificial giving of the congregation throughout these months, especially from those who could not make the transition to Zoom. My respect and encouragement have grown beyond measure as offerings arrived week after week during the time the physical building was closed.

On Sunday, September 12, 2021,  there will be a celebration to mark the milestone and I’m delighted to have the Very Reverend Peter Elliott to preach. We have shared many diocesan occasions and meetings over the years and he will make the occasion very special.

I am quite surprised to find myself still at Epiphany after all these years, but I would not exchange the experience for anything else I have been part of in the 35 years since I took holy orders. When I began it never occurred to me that after two decades in one place, I’d still be there, but one should always be open to God’s prompting for how your vocation may unfold.