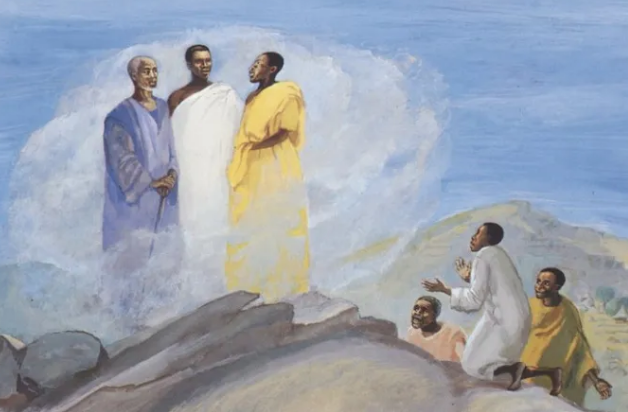 For four young men, three of whom were fit and strong from their lives fishing on the lake, the fourth from his constant walking around the countryside, the climb was not particularly a challenge. Tabor was only a few miles from Nazareth, the hill itself only about an hour’s climb. The view south is forever.

What happened on that small plateau will always remain one of the mysteries of the Christian tradition. We can only presume that at some later date these three, Peter, James and John, passed on the shattering experience of seeing Jesus as they had never seen him before. For a moment it seemed to them that others stood in that blazing light, specifically two giants of Jewish history, Moses and Elijah.

Later the three admitted to being terrified in those short moments. One thing they were sure of was that they would never again think of their friend as they had to this point. He would remain friend and teacher, but from that extraordinary day there would always be for them a new quality about him, mysterious and indefinable.

Whatever we today may mean when we speak of this incident as transfiguration, I have always assumed that what we are seeing here is three people suddenly realizing with blinding clarity in a way they never had before, the significance of what they had become involved in. I also think that this long ago episode speaks very powerfully to us in our own time

For us Christian faith is at a crossroads in history. For a long time it has existed in western culture comfortably and, for the most part, without challenge. That situation is now over. Great forces are changing our society and every institution in it, including the Church. Already our cities are communities of many faiths, including many of no faith. Christian institutions face new challenges and new tasks. Rising to these challenges will call for nothing less than a transformation – if you wish, a transfiguration – of the Church as we know it. Responding to the future that is forming will be nothing less than a generational task.

Whatever is the meaning of the blindingly vivid way in which the three Jesus at that moment, I see him as determined to get these companions to grasp certain realities about the challenges to which he is calling them. If I can presume to place words in our Lord’s mouth, they might well have been thus…

I brought you here because it is crucial you see what is really at stake. Like you I am a man, human and vulnerable as you are. One day I am going to die as we all have to die. But I have realized, that in a way that has no precedent, my humanity is being used by God to be a channel of the Divine into the world. This is what you are now involved in. Your relationship with me is never going to be the same. It and you have been transfigured.

As I said, my writing this is itself a presumption. I offer it only to help us all, myself included, to grasp the significance of this time of cultural transfiguration in our own lifetime, when our Lord may be saying much the same to us.