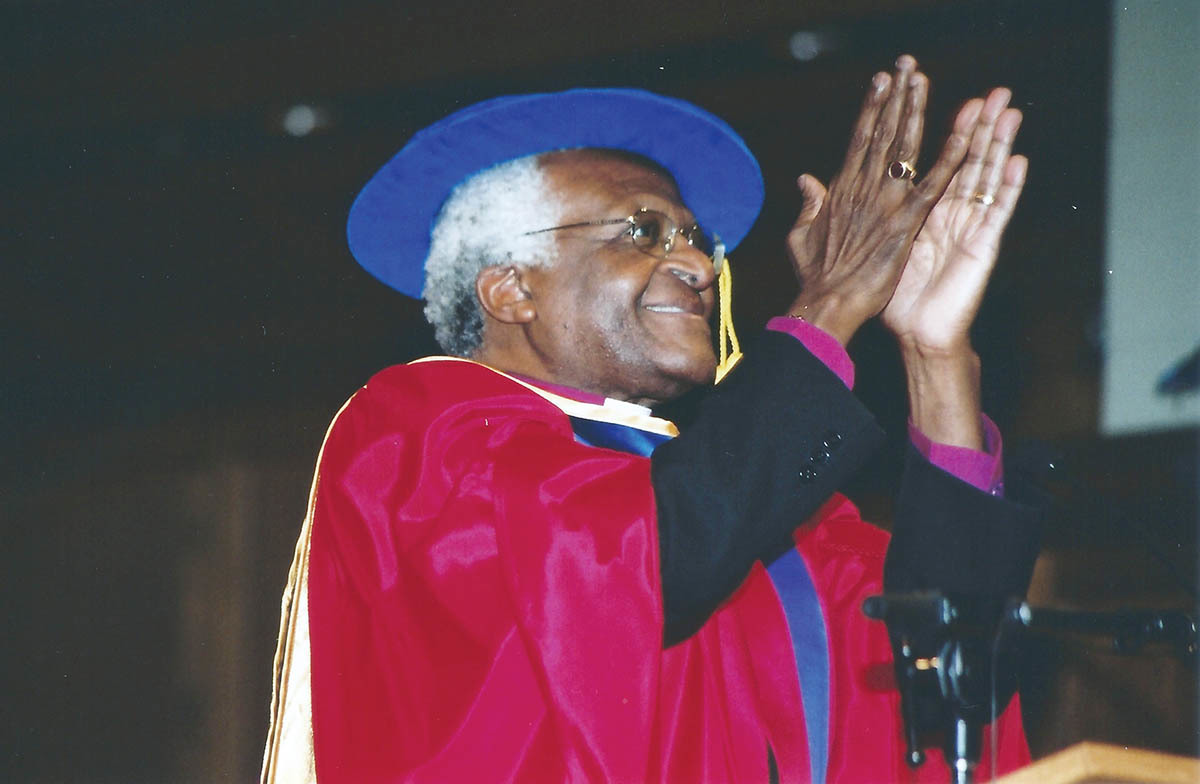 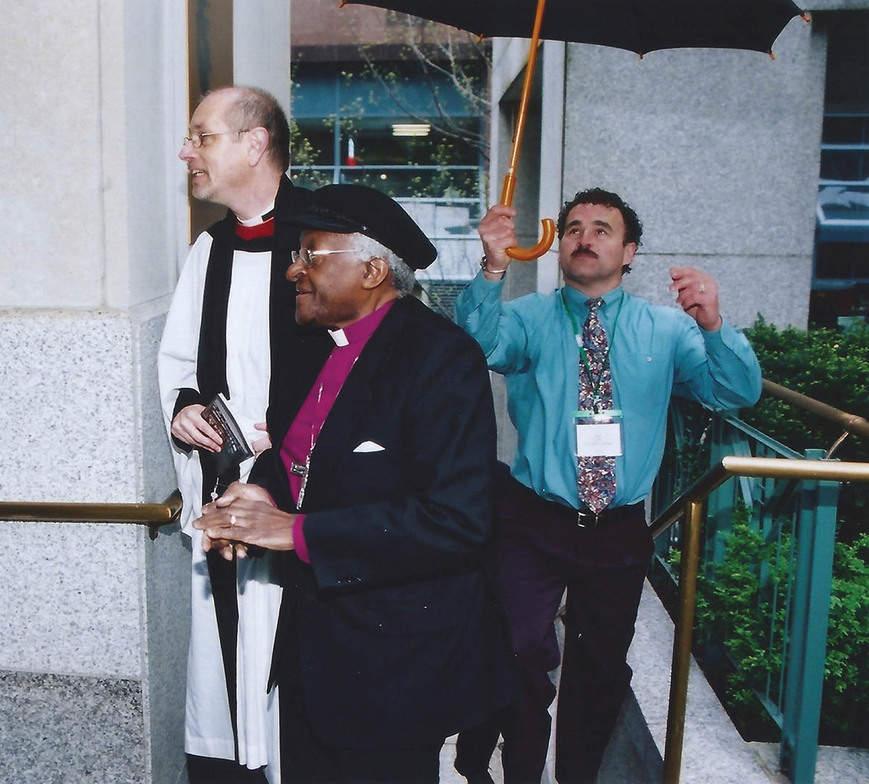 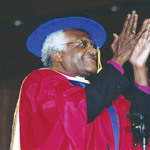 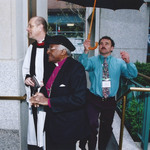 Wonderfully impish, deeply devout, passionately committed to justice for all God’s beloved children, Desmond Tutu, for over 40 years has been the world’s most famous Anglican.  My life was deeply enriched by him—it was an honour to spend time with him twice, first briefly in 1990, and then for a longer time in 2004.  Both times he left me with memories and stories that have deeply influenced my life and theology.

In August 1990, he visited Canada responding to an invitation from the Osnaburgh Band, part of the Mishkeegogamang First Nation, a community northwest of Thunder Bay.  Surrounding this visit he made visits to Toronto, London Ontario, and the Christian Festival in Halifax.  It was in Toronto that I first met him; the Bishop of Toronto had asked me to organize a liturgy of welcome at St. Paul’s Church on Bloor Street at a service of Evensong Sunday August 12th with Archbishop Tutu preaching.  A wonderfully talented group of liturgists and musicians worked creatively to develop a beautiful expression of evening prayer taking care to include people from many backgrounds in leadership including an ASL interpreter to enable the deaf community to participate fully.

We were all set: choirs and lay and clergy leaders, waiting for the Archbishop to arrive: he did, right on schedule about 30 minutes before start time.  I had been informed by his staff that he wanted to have a private space for him to meditate before the liturgy and was not to be disturbed.  This was respected but there was a problem: the ASL interpreter wanted very much to have a few moments with the Archbishop to get a sense of what he was going to say.  So he and I approached the study where Desmond was sequestered and I gingerly knocked on the door, “Come in” he said.  I explained the reason for our intrusion, he graciously agreed to meet with the interpreter, and I left them to have a conversation.  The liturgy went well, Desmond was, as always, magnetic and engaging. The interpreter was grateful that he had the opportunity to meet prior to the event, because the Archbishop’s theme was ‘transfiguration’—referencing the Feast of the Transfiguration which had just passed (August 6), speaking about how God was in the business of transfiguring/transforming the human community to become a place of equality and justice for all God’s beloved children.  Desmond’s willingness to break his prayer time to be of assistance to someone is exemplary of his generous and compassionate spirit.

In 2004 two of Vancouver’s universities honoured three ‘world visionaries’ with honorary doctorates.  Simon Fraser University and the University of British Columbia conferred degrees upon three Nobel Prize laurates: the Dalai Lama, Professor Shirin Ebadi (Iranian human rights advocate), and Archbishop Desmond. While the UBC special convocation was held at their Chan Centre for the Performing Arts, Simon Fraser chose to hold theirs at the (then) newly renovated and restored Christ Church Cathedral in Vancouver’s downtown.  I was invited to join the organizing committee for the visit. For each of the honorary degree recipients they asked one of the committee members to be a ‘Steward’—whose job it would be to meet our guest upon arrival and accompany them throughout the four-day itinerary.  I was asked if I would serve as ‘steward’ to Archbishop Tutu; without hesitation I agreed, and from that extraordinary privilege three short vignettes.

Having arrived on a Saturday afternoon, his first event was a non-scheduled visit to Christ Church Cathedral for the Eucharist.  It was the Second Sunday of Easter and the morning of Vancouver Sun Run. The Sun Run (in pre-pandemic times) attracted 50,000+ for a 10 K run through the downtown; its starting line was directly outside the Cathedral making getting to church difficult if not impossible.  Desmond was driven by a dedicated and determined parishioner who worked their way through police barricades and arrived in time for the liturgy.  Quietly I escorted him in: he simply wanted to be part of the congregation but agreed to greet folks at the announcements before the offertory.  Of course, heads turned as news that Desmond was in church quietly spread through the congregation. We proceeded as usual and at the offertory I invited him to bring greetings.  He spoke eloquently, thanking the Canadian Church for our support of South Africa through the apartheid period and encouraging all of us in our ministries.  At the end of the liturgy, he joined me in the procession out—when we got to the door, I said, “No need for you to stay and greet folks—we can get you back to your hotel right away.”  He looked at me and said, “But Father, what if I want to greet your congregation?” And so it was that he stood at the church door for an hour, greeting and speaking with each person.  Such grace.

Our assigned driver picked us up after a light lunch to take the Archbishop to his first scheduled event—a public forum at the Pacific Coliseum with the Dalai Lama.  Desmond insisted in riding in the front seat—he didn’t like the idea of being ‘chauffeured’ around—so on our many trips over the next few days he sat in the front with the driver while I sat in the back.  As we approached the Coliseum there was a protest going on outside the venue: a group of fundamentalist Christians were demonstrating against the event since it featured a Buddhist and a Christian.  I sought to explain the situation, saying that in BC’s lower mainland there were many very conservative Christians.  Desmond turned to face me in the back seat —“What they haven’t discovered, Father” he said, “is that God is not a Christian.” Seven years later, his book God is not a Christian was published.  Such wisdom.

Our driver skillfully got us to our entrance, far away from where the demonstrators were and we were escorted into the facility. We were taken to the ‘green room’—which was a hockey dressing room near the stage entrance. The Dalai Lama was already there with his entourage of monks and advisors and when he saw the Archbishop come into the room his face broke into a huge smile. They embraced warmly: the affection and respect between them was palpable.  An interpreter assisted their conversation, we had a quite a few minutes before they were called on stage and during a lag in the conversation, I said that the dressing room we were in used to be used by NHL players when the Coliseum was the Vancouver Canucks home arena; I added that many professional hockey players earn hundreds of thousands of dollars a year.  There was a brief silence, then Desmond looked at the Dalai Lama and said, “I guess we went into the wrong business!”  The two of them started giggling—it was wonderfully contagious and before long everyone in the room was laughing.  Then it was time for them to get to the stage.

I walked with Desmond as far as I was allowed—then he and the Dalai Lama were to walk up this steep staircase leading to the stage.  They took a first step together, then Desmond put his hand out and the Dalai Lama took it and they walked up the rest of the stairs holding hands.  When they got to the top and walked on to the stage the crowd of about 15,000 stood and cheered for what must have been 5 minutes.  It was an afternoon I’ll never forget—many people came to see the Dalai Lama and left talking about Archbishop Tutu.  Such a presence. There were so many other memorable moments over the days he spent in Vancouver: quite regularly he would cut something short to return to his hotel to rest and pray, and often have a drink! Being with him over those four days gave me a new sense of what stewardship meant—and a host of stories. Relaying the story of our trip to the Coliseum to my aged mother, I told her how Archbishop Tutu had said “God is not a Christian.” She responded, “Would you repeat that?”  I did: she said she’d have to think about that.  She told this to her conservative Mennonite best friend who responded, “Of course he is a Christian.” But the two of them reasoned it through and came to agree with the Archbishop and it transfigured their theological viewpoint—as it did mine.

Transfiguration: whether it was in his passionate opposition to apartheid in South Africa, his advocacy for Indigenous people in Canada, his solidarity with Palestinians in Israel or his absolute clarity about the place of LGBTQ people in the life of the church and the world, his words and actions were transformative. “Blessed are those who hunger and thirst for justice for they shall be filled” taught Jesus.  Filled he was, with joy, humour, life abundant: blessed was he indeed and blessed are all those of us whose lives have been transformed by his presence. May he rest in peace and power and rise with Christ in glory.

The Very Reverend Peter Elliott served as Dean of Christ Church Cathedral Vancouver from 1994-2019.  Currently he is the Interim Director of Anglican Formation at Vancouver School of Theology and is a Leadership Coach in private practice.

IMAGE: Top of page, Archbishop Desmond Tutu in 2004 at the SFU Ceremony at Christ Church Cathedral