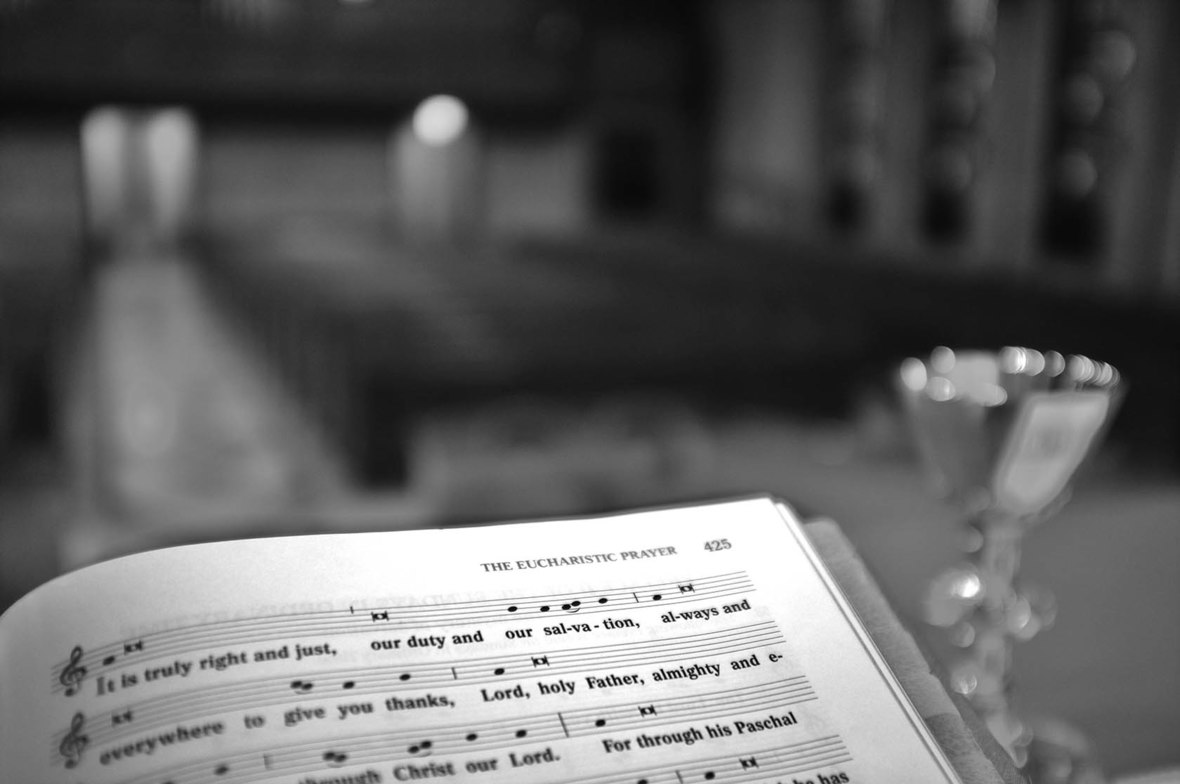 In the whole of the four Gospels, singing is mentioned only once. Both St. Mark and St. Matthew tell us that “When they [Jesus and the disciples] had sung the hymn [to conclude the Passover meal], they went out to the Mount of Olives”. Put the other way round, the Gospel was proclaimed and enacted by word alone. And yet our principal liturgies are full of music and singing.

Nor is music the only art form we use in our liturgies. We surround ourselves with visual art like icons and stained-glass windows, and we introduce theatre art in the actions, the dress, and the style of address of the liturgical ministers. The people take part in a similar manner by their singing, and their responses to the ministers, and to one another. We are participants in a drama and not merely spectators of a performance. In all, therefore, we do not proclaim the Gospel by words alone, but supplement words with music, and indeed with art is many forms.

This, of course, is far from new. The Book of Acts and several Epistles indicate that the first disciples continued the practices of their Hebrew forbears and sang “psalms, hymns, and spiritual songs”. We know from the same sources that they also participated in the central act of our drama, the Breaking of Bread. As for the rest, what is not mentioned was not necessarily absent.

But it can leave us wondering. Is preaching the Gospel a matter of words alone? In the prologue of the Gospel of St John we see ‘Word’, a term which to the Greeks denoted reason and reasonable discourse, used to name Christ. Is, then, preaching Christ a matter of reason alone, or should we involve feelings and emotions as well? Do we need just the words or both the words and the music?

Judging by the intense debates in the Church during the third and fourth centuries, the answer is that it’s the words that matter. As a result of those debates, we got our Nicene Creed.  In more recent centuries much breath (and paper) has been spent arguing whether it is reasonable or not for people to recognize the existence of God. This more recent dispute about agnosticism and atheism began, according to received opinion, in the 17th century with Baruch Spinoza the philosopher.  Since then increasing numbers have become at least agnostic if not atheist, and in any case indifferent to the question. This falling away, we are told, we should combat by better argument and stronger rhetoric, trading word for word.

In a recently-published book entitled Unbelievers, the historian Alec Ryrie disputes the claim that unbelief grew because belief was unreasonable. As he puts it: “The death-by-philosophy narrative is a poor fit with the actual chronology of Western secularisation”. In his view, unbelief arose as an emotional response, of anger, and not as a rational response. And it began before Spinoza started writing – in the 13th century, in fact.

Ryrie claims that anger grew towards a Church that used its claim to define right belief as a means of extortion and oppression.  That power was weakened in the 16th century with the advent of the Reformation, whose leaders pointed to the Scriptures, not the Church, as the guarantee of right belief.  Unfortunately, those leaders could not agree on what the Scriptures had to say, leaving their followers bewildered and anxious.  In both cases the easy escape was to reject belief.  When Spinoza came upon to the scene, he merely provided a rationale for what had already happened.

If Ryrie is right, then he points to a strategy for preaching the Gospel that recognises the need to appeal to both reason and emotion.  That, I suggest, is what our liturgical practices do.  Even as we sing the Nicene Creed we affirm that “We believe in one God”, and not that “We believe that God is one”.  We believe in, expressing our trust and confidence in God; we do not believe that, assenting to a statement about God.  Furthermore, it is we who do it, not I: we do it as the body of the faithful, not as an isolated individual.

Our Anglican liturgies are rich and varied, and are both traditional and contemporary in style, with words and music. With their reliance on appropriate forms of art they offer us a transcendental experience which is grounded in reality.  When newcomers join us, we can first offer to share that experience with them.  Later, we can give them reason for what we say and do. Of the two, I suspect that the experience, not the explanation, is what they first come seeking.