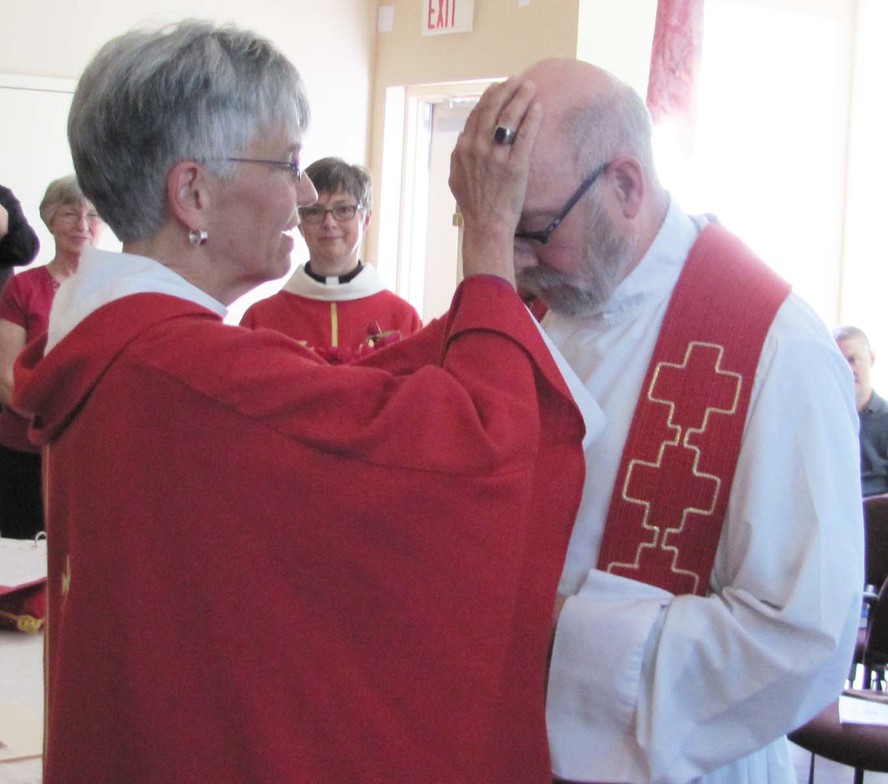 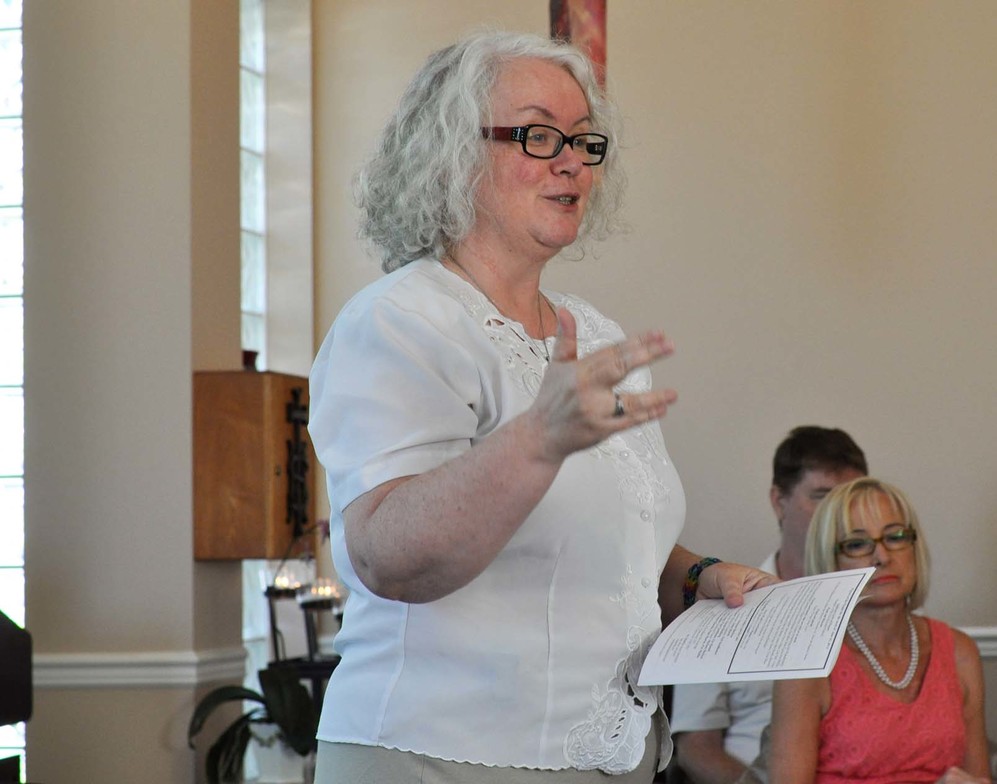 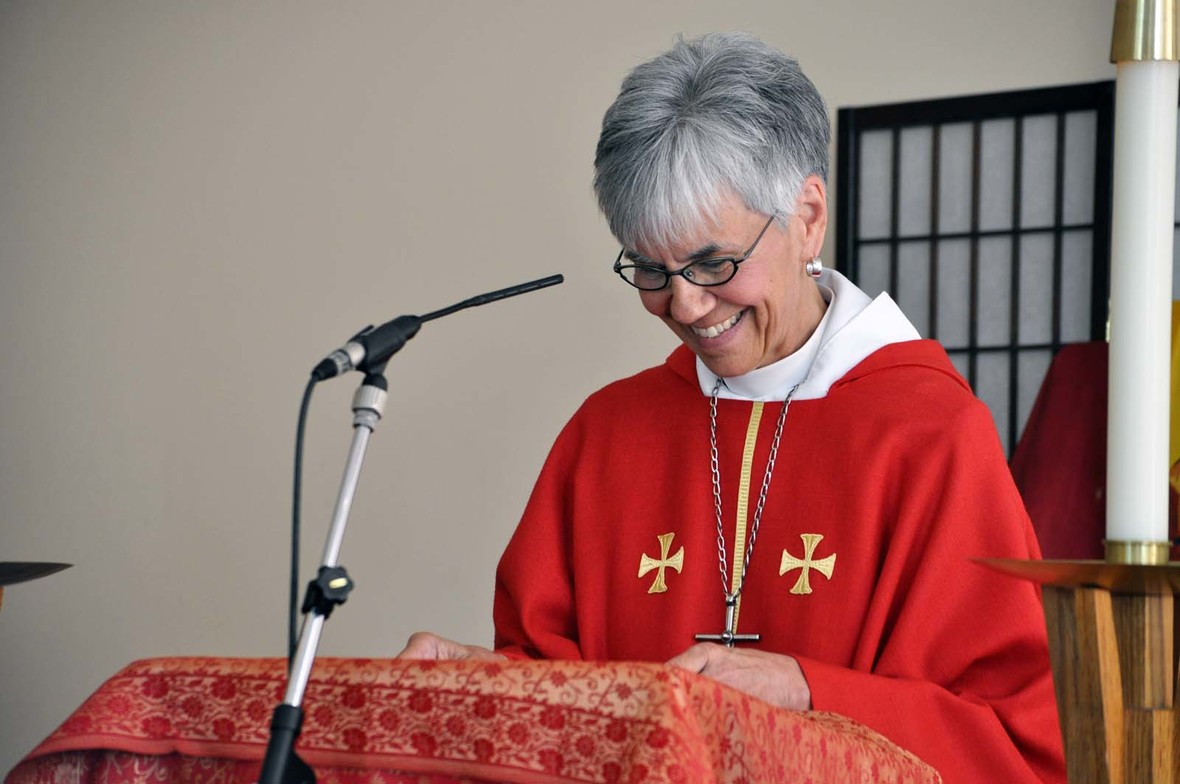 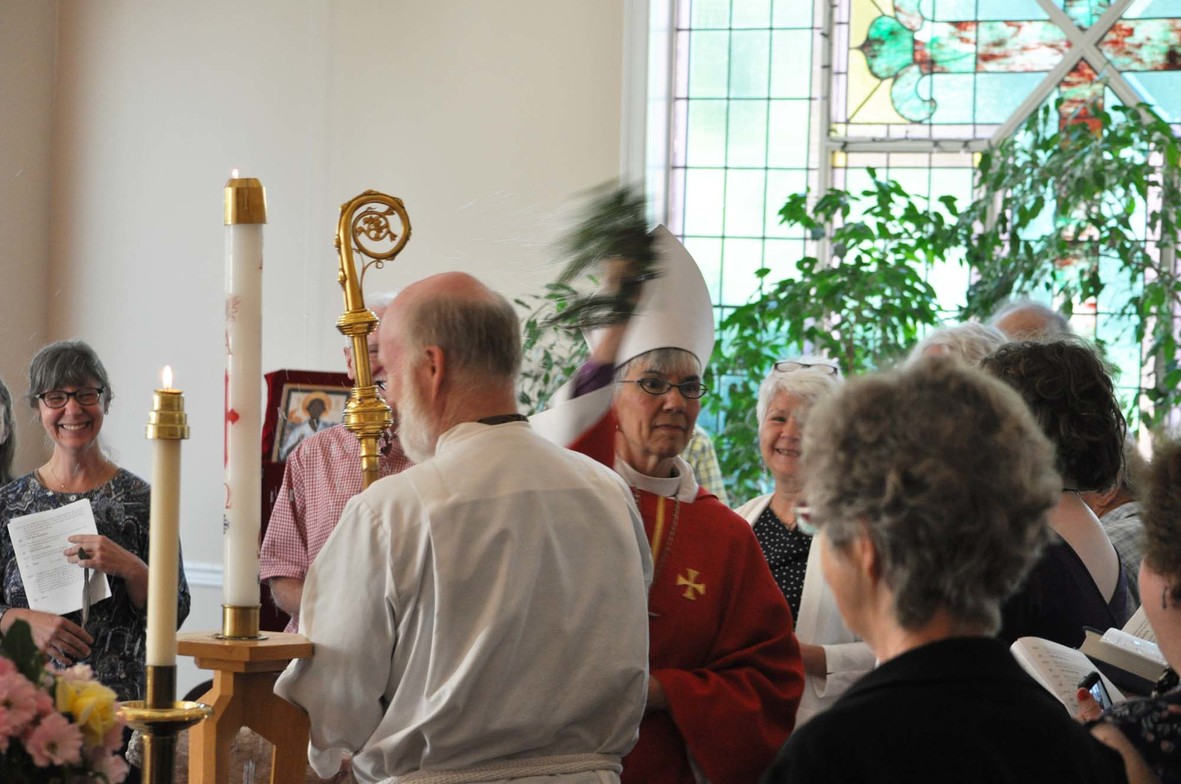 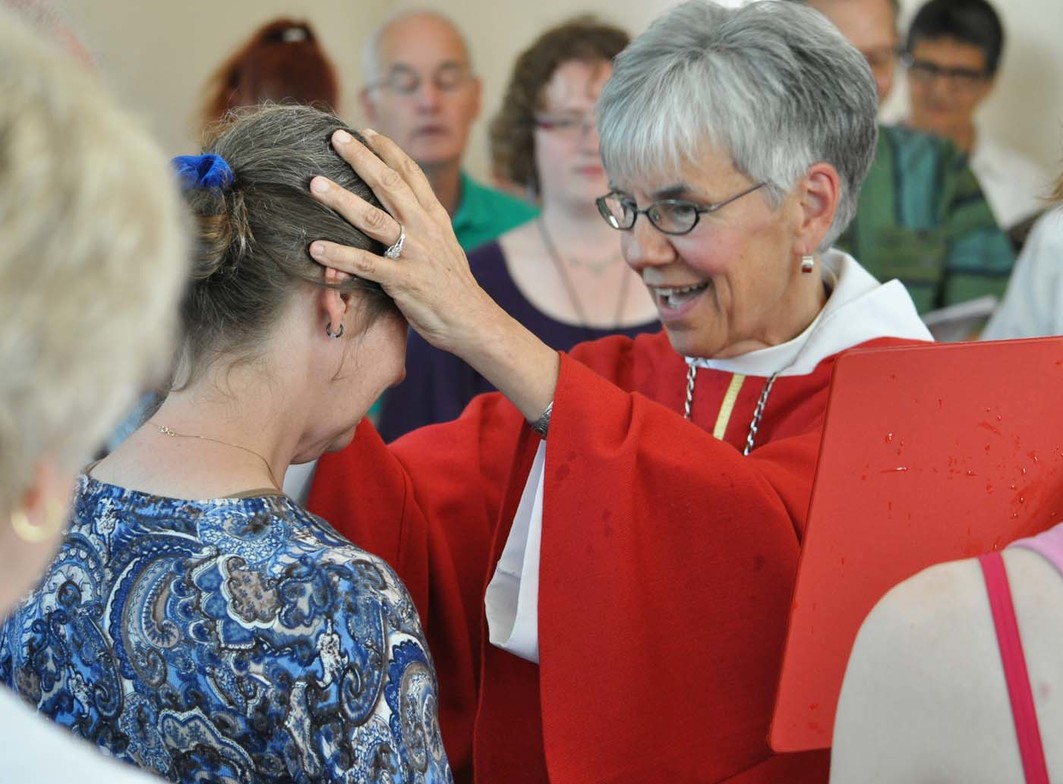 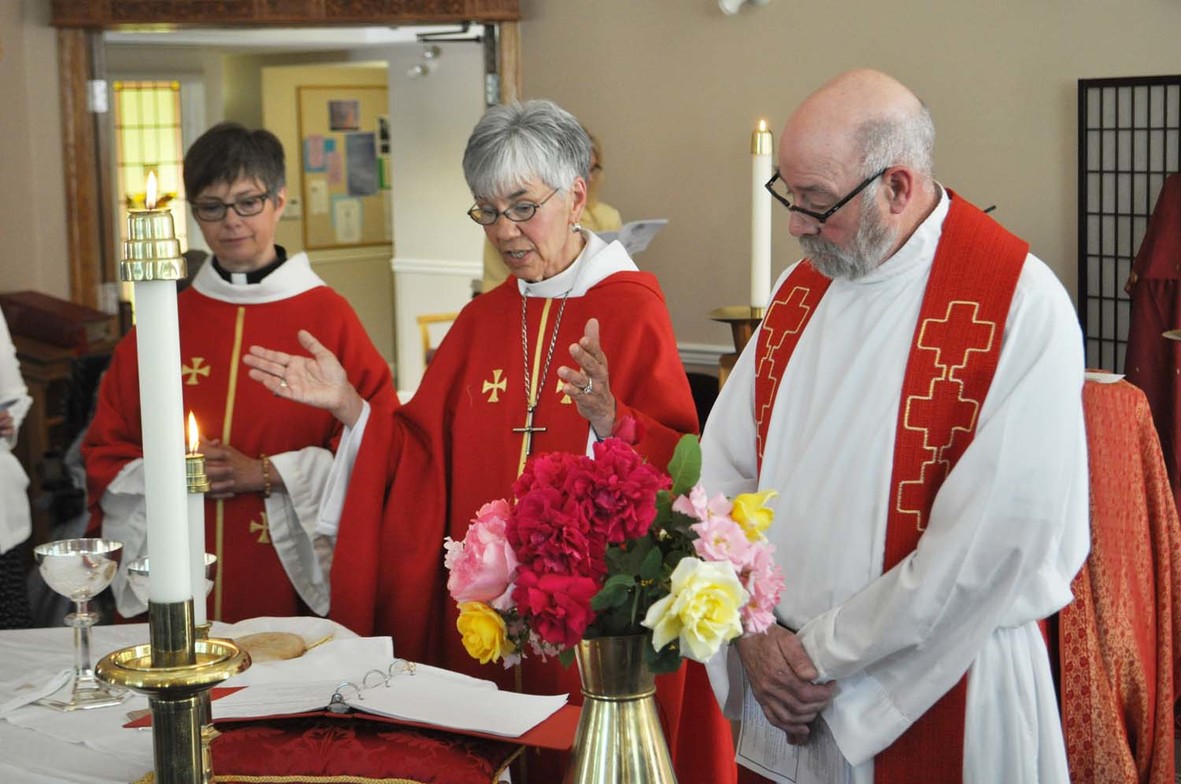 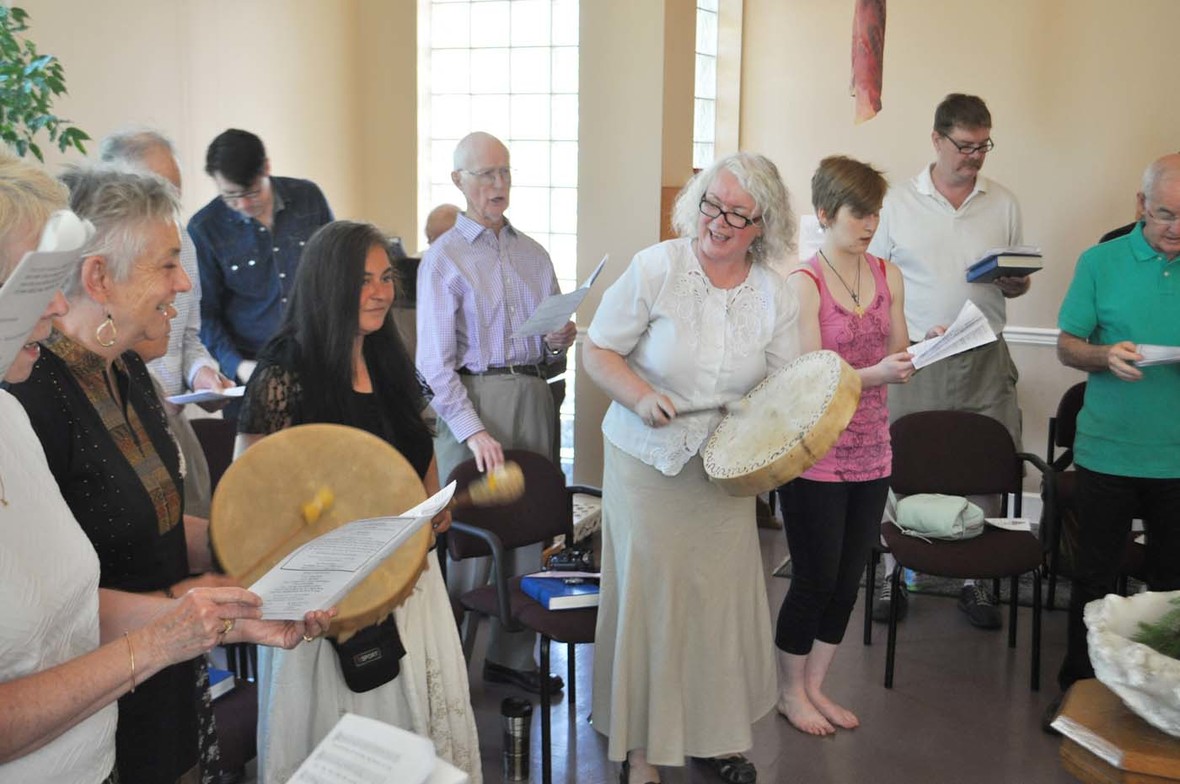 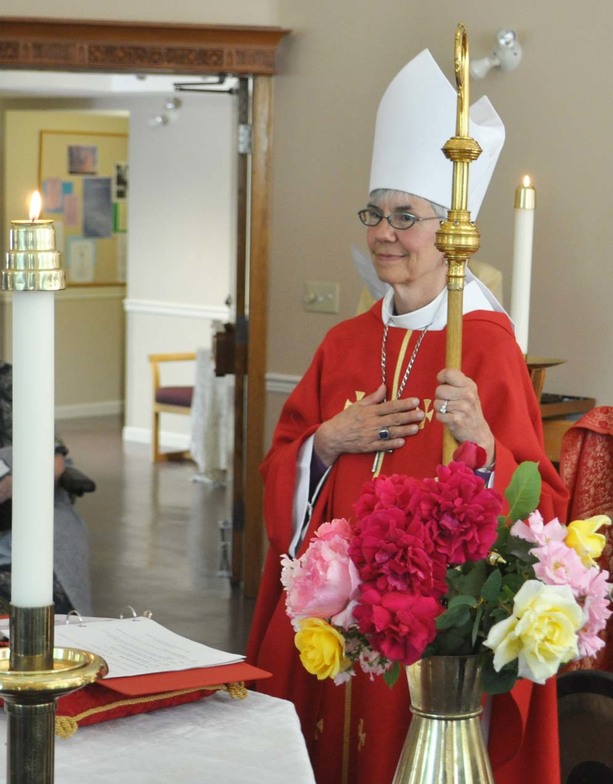 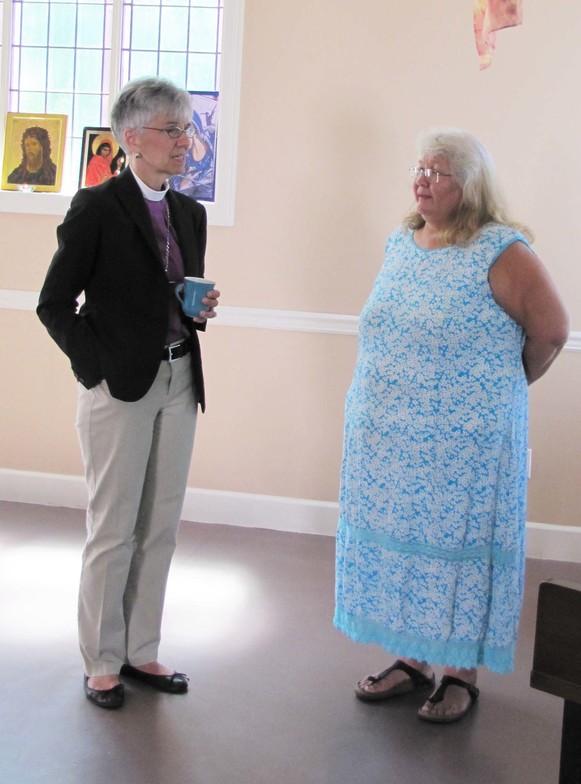 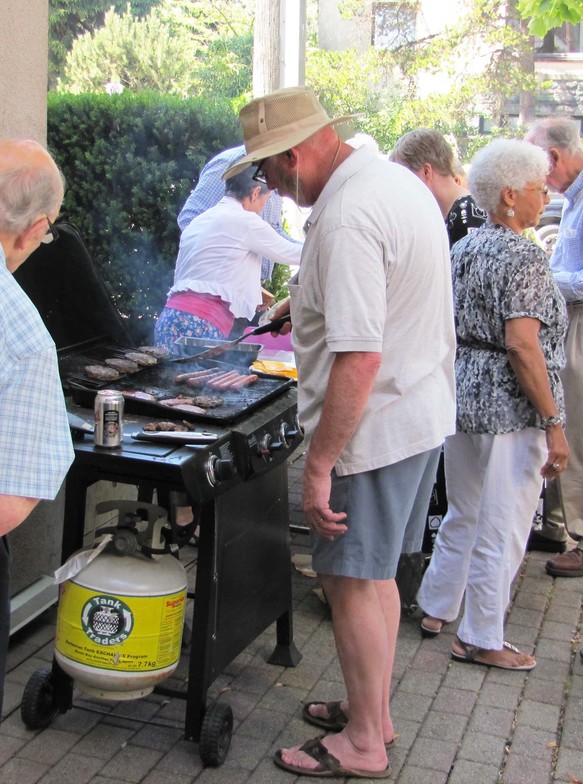 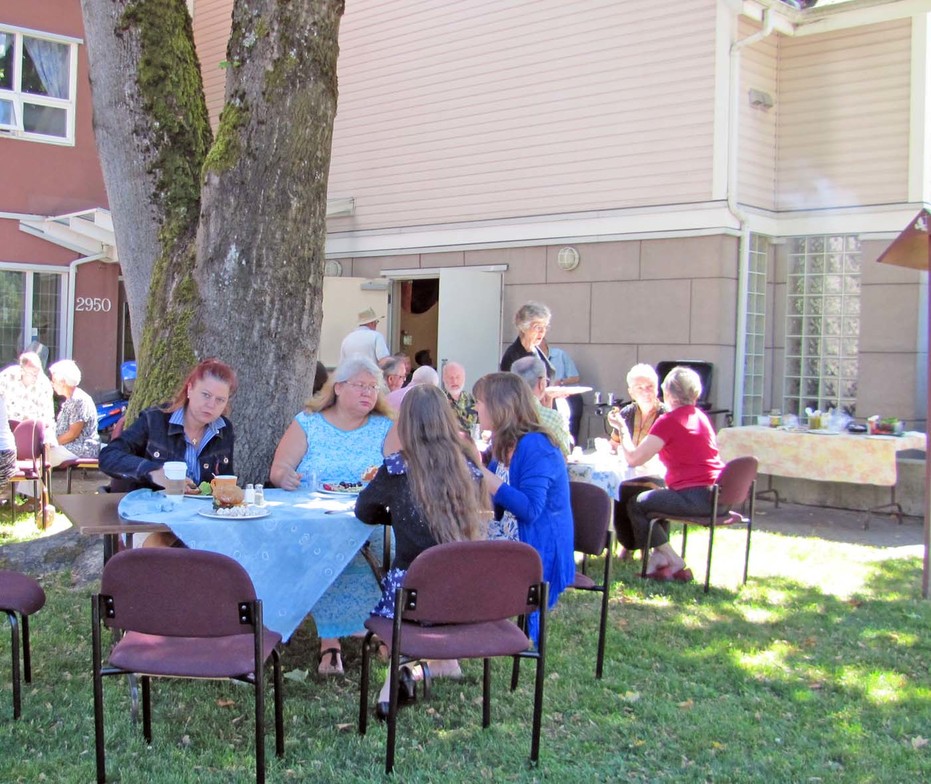 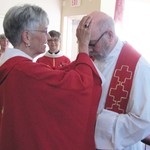 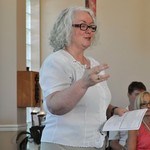 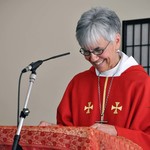 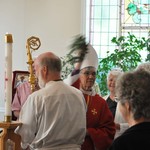 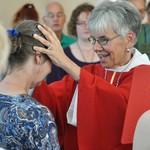 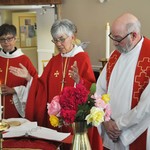 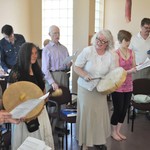 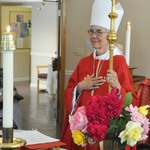 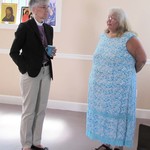 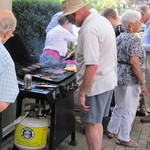 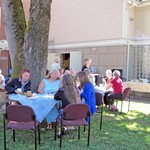 The Right Reverend Melissa Skelton, the 9th Bishop of the diocese of New Westminster is passionate about her visitations. Now that she is into the second year of her episcopacy she has visited a good percentage of the parishes of the diocese and is getting to know her flock. During a visitation, Bishop Skelton wants to bring as much as possible to that community’s shared worship and spiritual experience. With that in mind she makes available to the congregation the sacrament of confirmation and the intentional act of reaffirmation when she visits. This was the case on June 21, 2015, the National Aboriginal Day of Prayer/Fourth Sunday after Pentecost at St. George’s, Vancouver. At St. George’s there were three confirmands and four others wishing to reaffirm their baptismal vows.

St George’s is a faith community that meets in a sanctuary space conducive to "worship in the round"in the lobby area of a housing complex in the Vancouver Regional Hospital district of Vancouver. It is a lovely room, bright and cheerful with a warm, friendly feel, a large window with a colourful stained glass cross faces the south.

There are many members of St. Mark’s, Kitsilano in the St. George’s congregation and also in leadership. In recent years, circumstances had made it very difficult for the St. Mark’s community to continue meeting in their building so they were offered a home at St. George’s. St Mark’s priest-in-charge the Reverend John Marsh had also been appointed priest-in-charge at St. George’s so things have evolved and a new community is being created. There are serious plans being discussed for the parishes of St. Mark and St. George to merge, but as of this writing the actual formal process of merger has not caught up to the reality of the current composition of this faith community. There will be more information about the gathering of these two parishes in the future. Stay tuned.

Prior to the beginning of the Celebration of Confirmation and Reaffirmation Eucharist, Pam Martin a long time parishioner of St. Mark’s led a brief rehearsal of the music in worship. This was very helpful for those who are not regular worshippers but want to participate fully in the liturgy. After the service Pam told diocesan communications, “, I am passionate about making our worship services as clear and accessible to visitors as possible…” The Order of Service bulletin was very thorough and provided musical notation for the Mass and Psalm settings which when paired with the rehearsal, made for a very positive first time worship experience.

For her sermon text, Bishop Skelton chose the Old Testament reading, 1 Samuel 17: 32-49, the story of David and Goliath. At the beginning of her homily she acknowledged that the story of David and Goliath is “widely known” but it remains extremely important "for at the heart of it is a durable and radiant truth that is not only central to how we understand the God of David but is at the heart of what we see in the person of Jesus as well. And, of course, it’s an understanding that will be particularly important to us today in that we are confirming and reaffirming seven people in their Christian faith as well as remembering all Aboriginal peoples in Canada this day.”

Bishop Skelton went on to unpack the passage by explaining that as the battle begins the Philistine, Goliath is heavily armed, confident, and the Israelites are terrified. David happens by and hears the giant’s challenge and taunting and offers himself as the Israelite’s representative. As a shepherd David has had to kill many wild animals to save his flock but his confidence and courage are not because of his experience and skill, he is prepared to battle because he knows that he has the protection of God. He is protected by his faith. “God not only stands with those the world would regard as small and vulnerable but the energy and movement of God is toward the casting down of the mighty from their thrones and the lifting up of the small and the vulnerable. God’s liberating and dignifying energy and movement wants to assist us in standing up to the many Goliaths that the world will serve up to us in our lives.”

Bishop Skelton continued by drawing a parallel between the Old Testament reading and National Aboriginal Day saying, “…on this day in which our country celebrates all of its Indigenous peoples, we must ask ourselves this: can we, will we, honour them as those among us who have been the most vulnerable and disregarded of peoples and, therefore, the ones with whom God stands? And to build on this, can we, will we, embrace and participate in the continuing truth and reconciliation effort as the holy process by which the Goliath of colonialism will be brought down at last?”

She then remarked on the horrific murder of nine people at the Emmanuel AME Church in Charleston, South Carolina and counseled the congregation to “open ourselves to receiving this situation with vulnerable hearts instead of hearts made hard by so much news of violence in the world? And to build on this, can we, will we, rededicate ourselves to the small and powerful everyday actions that, with God’s help, have the power to fell the Goliath of racism like so many smooth stones?”

She concluded her sermon with this quote from the late Peter Gomes, former Chaplain at Harvard who said, “The gospel of Jesus Christ comes down to a rather simple proposition for ordinary (small) people like you and like me: If God is to be known, that knowledge will be in the lives of the ordinary people who are redeemed by his extraordinary message of love. What the world knows of God it will know through us; for better or for worse we are the good news, the gospel; we are the light of the world…We do not have to postpone the blessedness of Christ into some ever-retreating future, and we dare not wait for more qualified Christians, better prayers, or better rules to come along and do our shining for us. No, the work of God awaits our hands, the love of God awaits our hearts, and the people of God await our fellowship here and now, ordinary and imperfect though we may be.”

At St. George’s the congregation is encouraged to respond to the homily and to the source text. Several people present at worship offered their thoughts about what they had just heard. One person cautioned the congregation, saying that we must watch out that we don’t fall victim to self-righteousness and jump to the use of the “sling” whenever we feel we are oppressed.

Following the sermon and the congregational reflection, the Bishop was presented with the confirmands: Jade, Pamela and Ted; and the four wishing to reaffirm their baptismal vows: Cheryl (who was also celebrating her birthday), Pam, Peter and Willow. After her examination of the seven she led the congregation in renewal of the baptismal covenant followed by asperges (the sprinkling of Holy Water as a reminder of baptism) which is always something received with much joy, smiles and laughter. Long time St. George’s parish leader John Lamble led the intercession and then it was time for the Celebration of Confirmation and Reaffirmation.

After the sacraments were performed, priest-in-charge, the Reverend John Marsh stepped forward to present vows that he had composed. Prior to formally presenting the vows he said, "They are an adaptation of the Benedictine vows of poverty, stability, obedience and chastity. As an adaptation they are not meant to repudiate or replace the traditional vows but rather to expand them, revealing their essential meaning in order for persons outside of traditional forms of monasticism to consider living an intentional life dedicated to the holy. They grow out of and are rooted in our primary baptismal vows." And then he made the vows:

To these ends I commit to a daily spiritual practice, compassionate service, justice and hospitality and to observe and converse about the leading edge of the spirit as she deepens my awareness of these vows.

Then it was time for the Eucharist. The Eucharistic Prayer offered was adapted from the National Aboriginal Day of Prayer of 2002. When it was time to administer the sacraments of bread and wine, the congregation formed a circle with each communicant offering the Body and Blood of our Saviour to the person beside them.

After the Eucharist and prior to dismissal there were a few announcements and one of the announcements was that Vivian Seegers who has been (and continues to be) very active in Indigenous Ministry and Justice not only at St. George, Vancouver but around the diocese and further as well has been given the blessing from the parish discernment committee to enter into the diocesan discernment process for ordination. This announcement was punctuated by enthusiastic applause.

Following worship, Rev. Marsh staffed the grill and the community gathered at tables set up on the grounds of 2950 Laurel Street and enjoyed a barbecue lunch together.

Please keep those who identify as members of St. Mark’s/St. George’s in your thoughts and prayers as they journey together towards merger. And please pray for the newly confirmed: Ted, Pamela and Jade; and the newly reaffirmed: Cheryl, Pam, Peter and Willow, and also pray for Vivian as she takes the next step seeking ordination in the Holy Church of God.

"Teach my heart this day, where and how to find you" Link to April 15, 2021 E-News Nominations Committee Promos