”When God Calls, We Should Go Where He Asks” 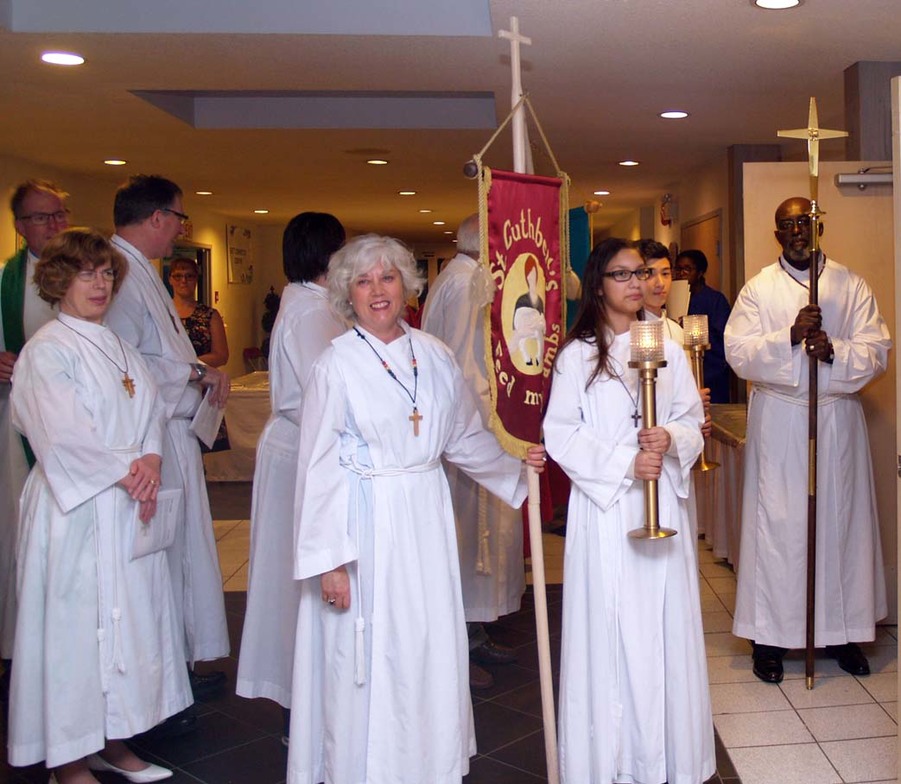 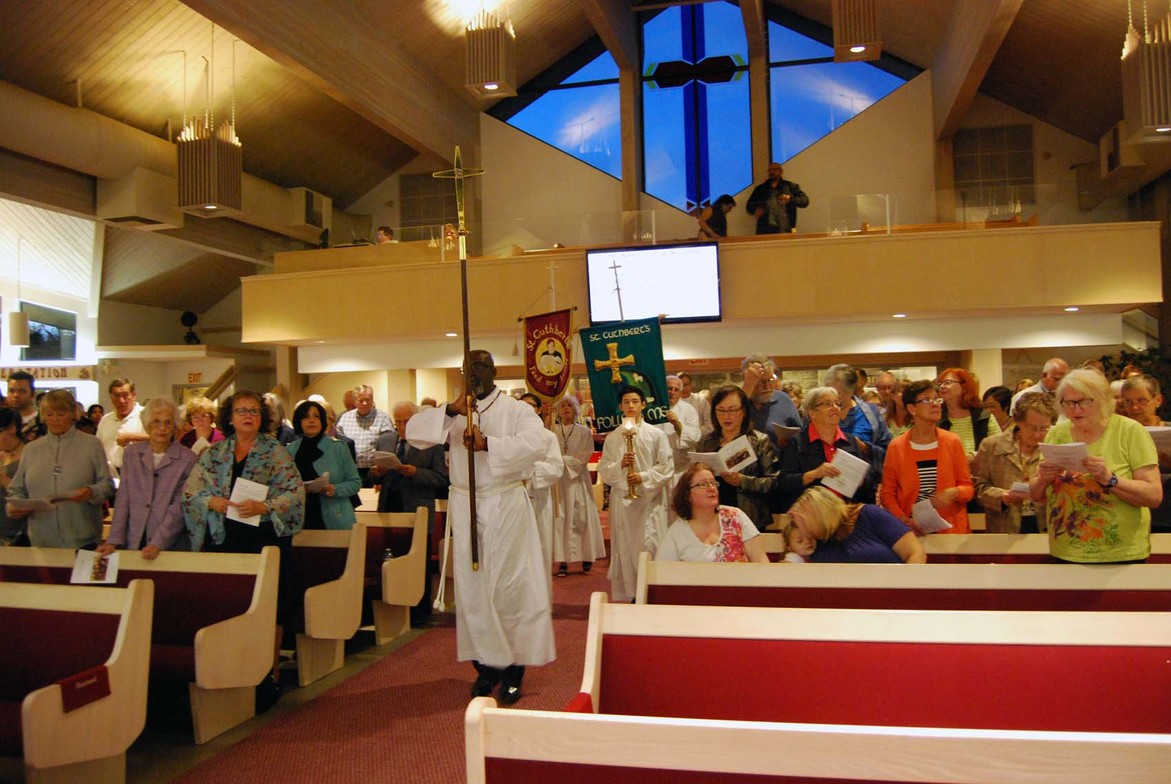 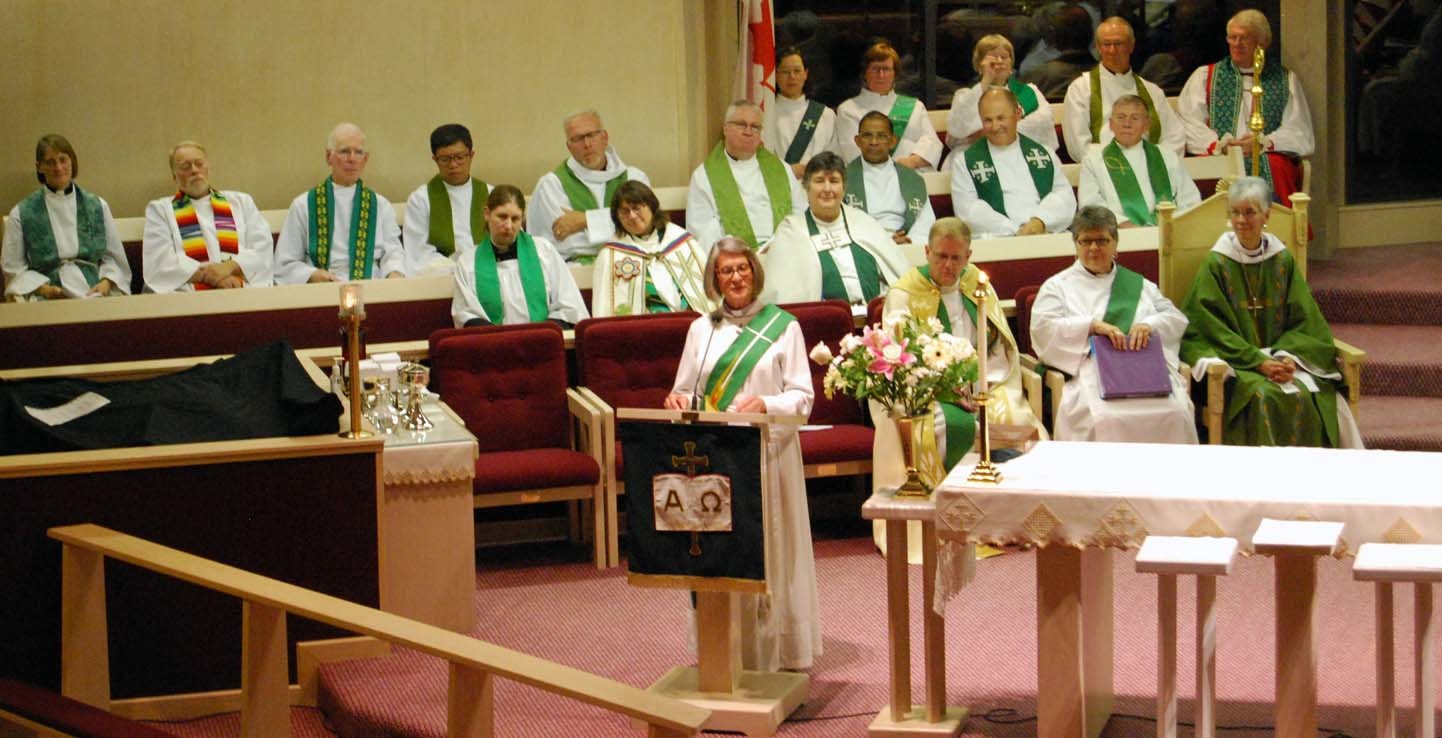 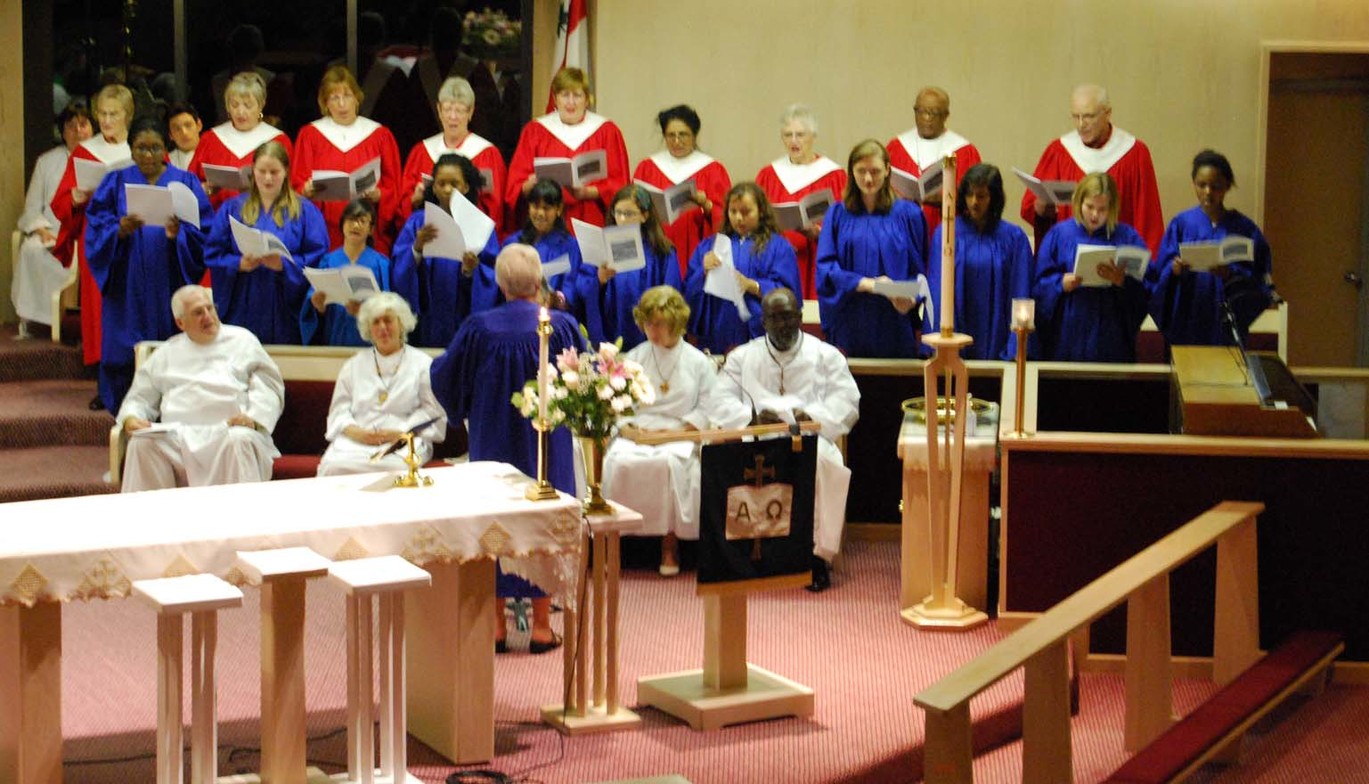 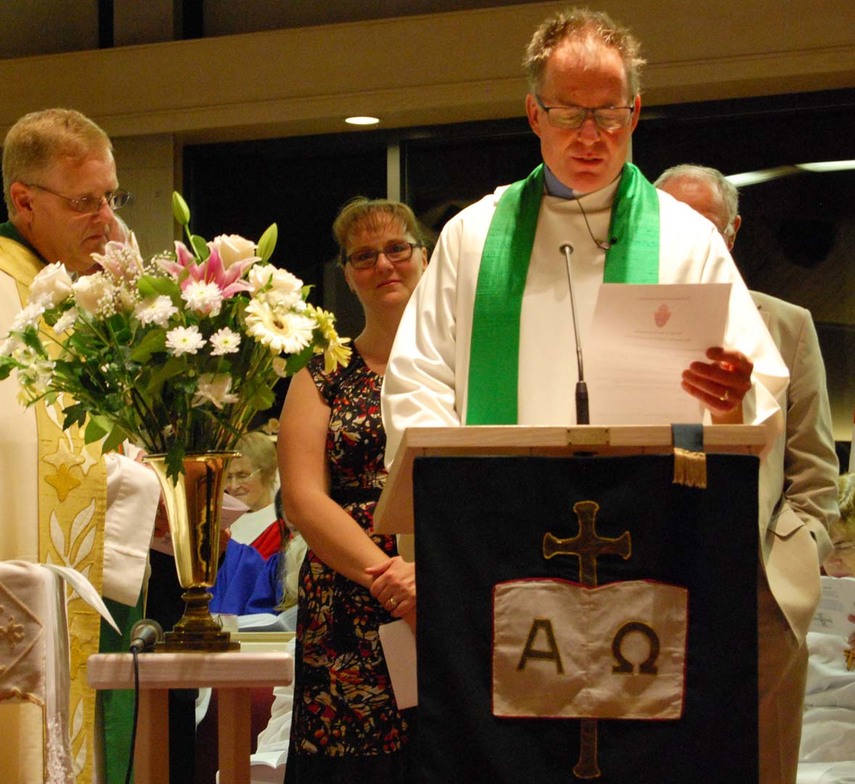 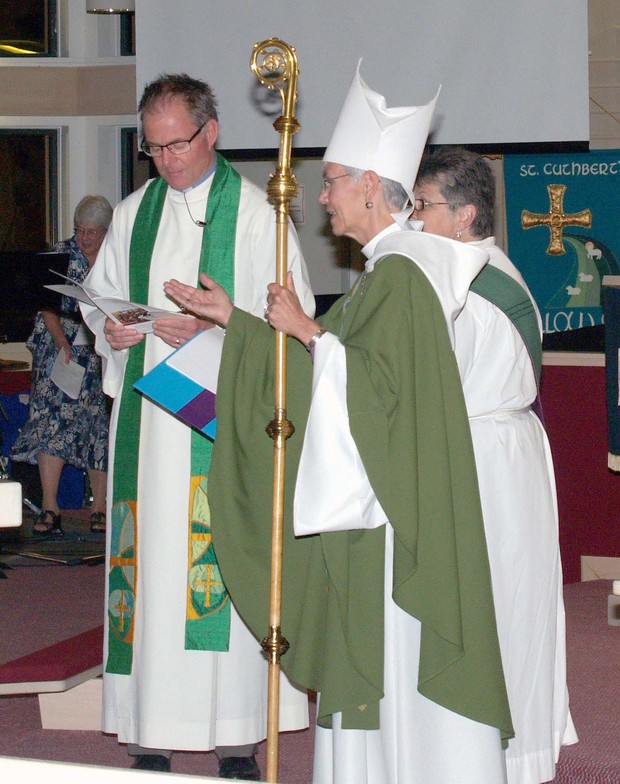 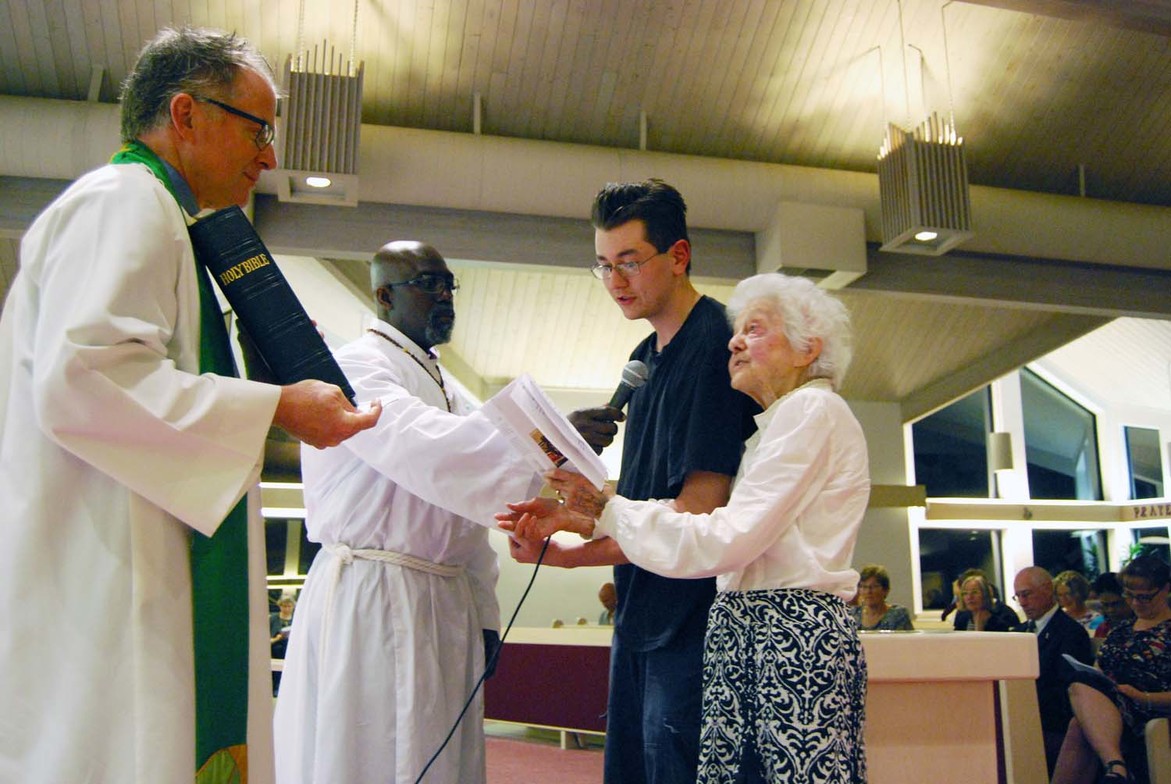 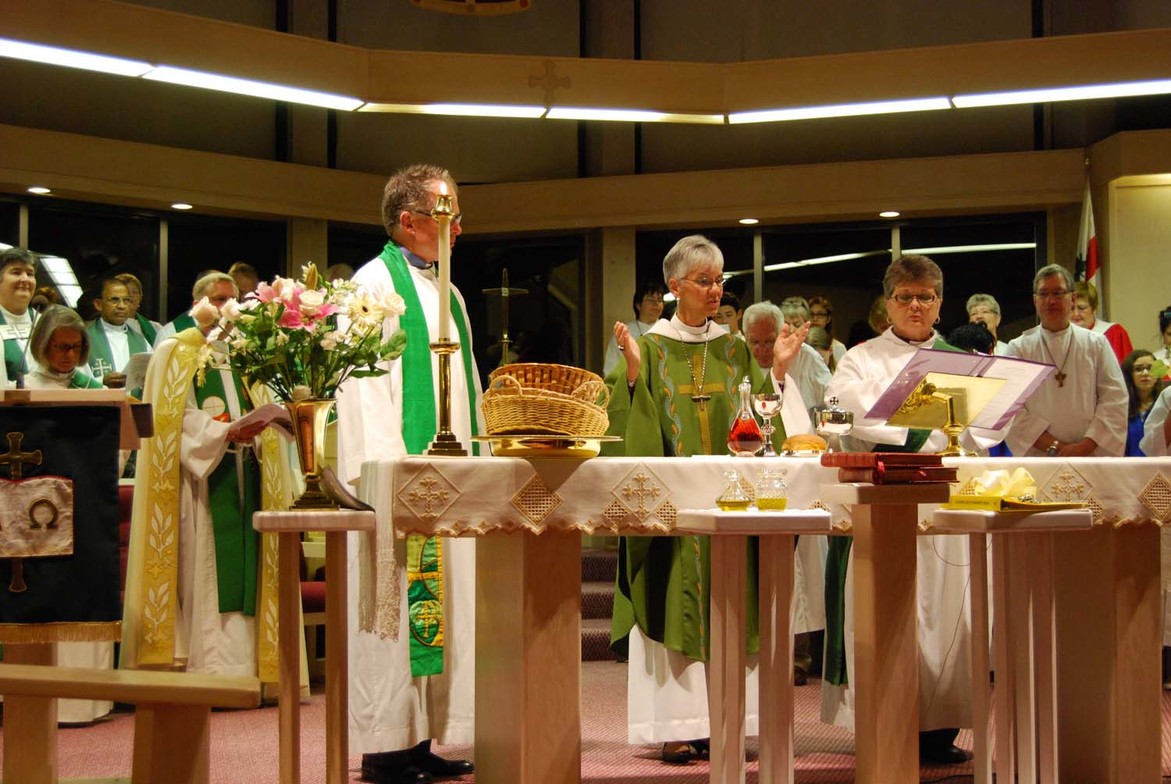 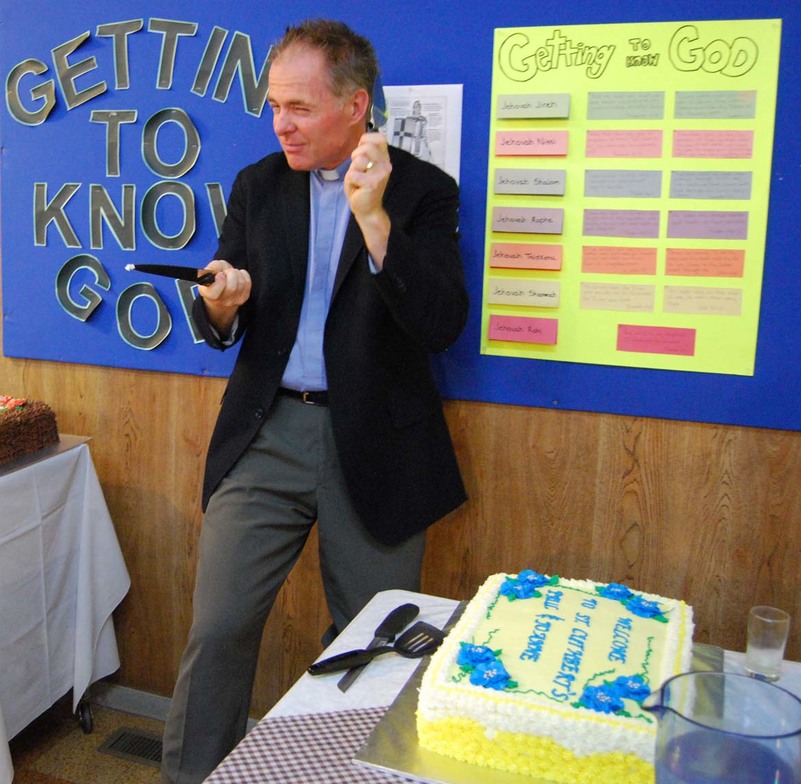 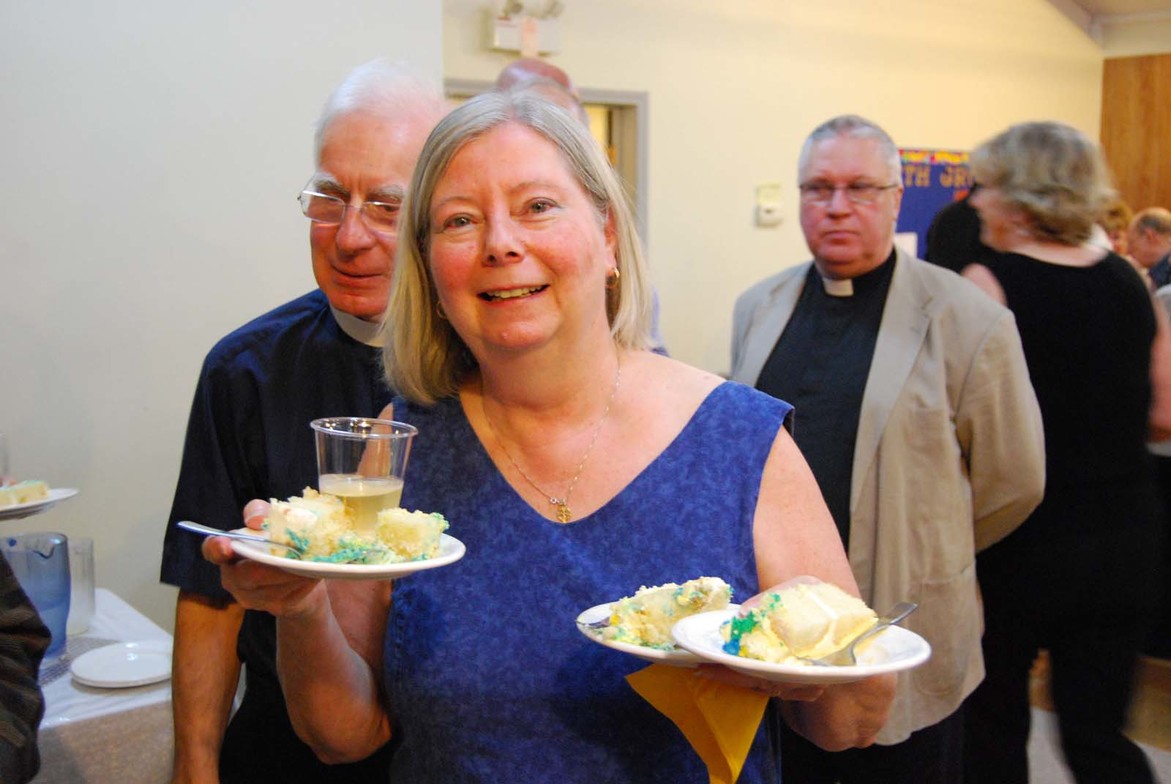 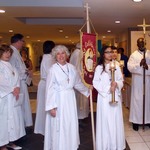 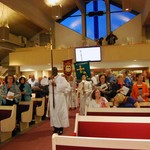 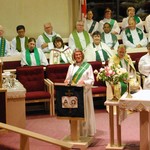 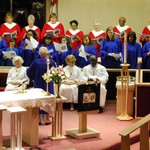 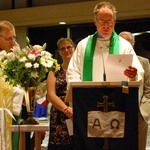 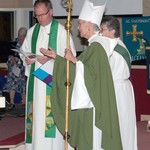 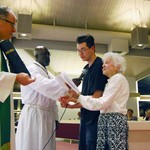 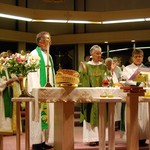 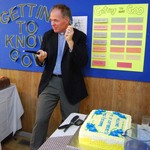 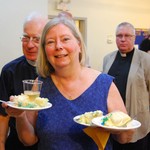 St. Cuthbert’s Anglican Church in Delta welcomed a well-known neighboring priest as their new pastor during a colourful ceremony on Monday night, October 5.

The Rev. Paul Woehrle, who for 13 years had been the incumbent of St. David’s, Tsawwassen, South Delta, was presented the keys to his new posting at the Anglican parish in North Delta that serves that community and nearby central Surrey.

Bishop Melissa Skelton presided at the installation Eucharist. The church was filled with members of both Woehrle’s recent and new parish. Three choirs sang – senior (in red), youth (in blue), and Praise Band (unrobed), and the ceremony had an ecumenical touch with ministers and pastors attending from other churches in the community.
Led by Crucifer Coby Asiedu, the procession included the choirs, banner carriers Ken Hahn and Lori Riel, acolytes Matthew Cheng and Kirsten Starr and server Beth Fortin. About 30 diocesan robed clergy, both deacons and priests, followed, including Woehrle’s former boss, the Rt. Rev. Michael Ingham.

With her chaplain for the evening, the Rev. Connie Wilks, deacon at the Church of the Epiphany in Surrey, Bishop Skelton came in at the end of the procession.

In line with the diversity that is the makeup and the liturgy at St. Cuthbert’s, the processional hymns included both the more traditional sounding “In the Name of Christ We Gather” by Shirley Erena Murray and the lively “10,000 Reasons (Bless the Lord)” by Jonas Myrin and Matt Redman. Coleen Metcalf was organist and pianist. Tony Houghton led the Senior Choir, and Barb Buxton the Youth Choir and Praise Band.

The Hebrew Bible lesson was from the story of Jonah and read by Joanne Woehrle, Paul Woehrle’s spouse: Psalm 130 was led by Fay Pereira, and the Gospel, the Parable of the Good Samaritan, was read by the Rev. Karin Fulcher.

Fulcher, a former deacon at St. David’s who had worked with Woehrle for several years, gave the sermon, and spoke about how reluctant was Jonah to the call of God. “Jonah would have liked call blocking,” she joked, and he was trying to get as far away as possible from Nineveh, where God had ordered him to go.

Just as Jonah initially was reluctant to listen to God so can we be, said the preacher. ”When God calls we should go where He asks,” she said, but we can be intentionally deaf. “There are none so deaf as those who will not hear.”

Deacon Fulcher drew the same lesson from the Good Samaritan story, in which several people passed by the injured man on the road before the Samaritan came to his aid. “We might ask ourselves what would we do? What if we were on our way to a civic or religious event in our best clothes or vestments?”

Having worked with Woehrle for many years, she knew that he will be constantly urging his parishioners to do God’s work in the community. “Paul is a great encourager.”
His only fault, she said, is a penchant for painful puns. Some are brilliant but most are awful. In any case they make people laugh. “He has a terrific sense of humour.”

Following the sermon, before the Bishop and Archdeacon Stephen Rowe, Woehrle signed the covenant in ministry, pledging to obey his bishop and her successors, and was presented a license to become rector of St. Cuthbert’s. (Actually he had begun work October 1.) Bishop Skelton then formally installed him.

Then followed a number of representatives of the congregation, who presented their new rector with symbols of ministry. First came the Bible, presented by Alex Fortin, and by Helen Riel, who at age 91 is one of the few remaining original parishioners involved in founding St. Cuthbert in 1959 as a mission from St. Helen’s, Surrey.
Other presenters of symbols were: Water, by Bexhell and Jegatha Rajkuman; Bread and Wine by Sharon Grove and Adrian De-Heer-Amissah; Oil by Allan Hains and Sarah Houghton; Books of Worship by Merv Thorne and Leslie Ward; Diocesan Canons by Al McDowall and Caitlyn Marsh; and the keys to the church by George Goater and Sandi LaCharité.

The Rev. Craig Tanksley of St. Mark’s Ocean Park, the Regional Dean for the area, formally welcomed the new rector. He said that he had often been on hikes with Woehrle at clergy retreats where he showed himself to be not only a leader but among the most physically fit priests in the diocese, and was happy he was joining the Deanery.

Pastor Mark Johnston of the North Delta Evangelical Free Church, representing the Delta Ministerial—an ecumenical association of pastors, ministers, and priests who serve the community, presented a greeting and noted the diversity of St. Cuthbert’s.

A standing ovation was given the Rev. Arthur Nash, who had served as interim priest at St. Cuthbert’s for over a year following the departure of the Rev. Allan Carson, who left after 11 years in the parish to take up a new ministry at St John the Baptist, Sardis, in September, 2014. This was the fifth parish in which Nash has served as an interim since his retirement.

After Prayers of the People, led by Len Reimer and Samantha Jesperson, the Eucharist and the Episcopal Blessing, and the Recessional to the hymn, “Lift High the Cross,” the congregation adjourned to a crowded parish hall for a reception where the new rector cut two cakes welcoming the Woehrles to the parish.