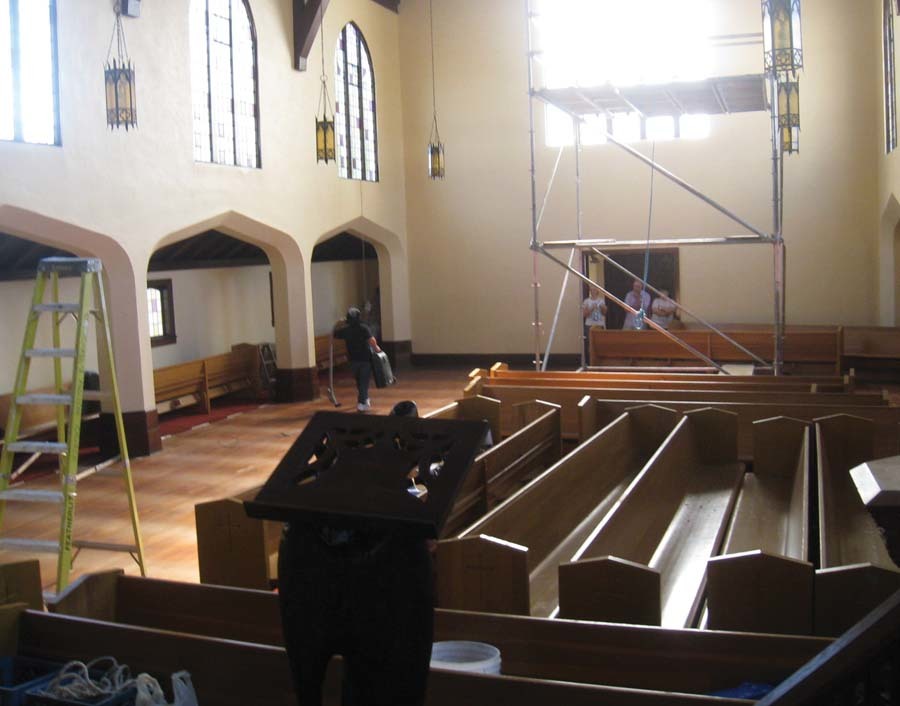 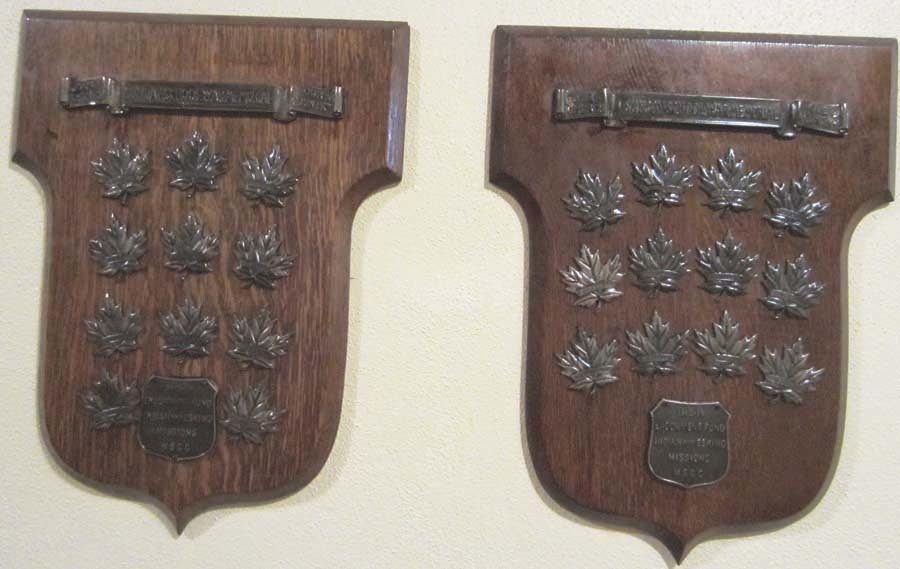 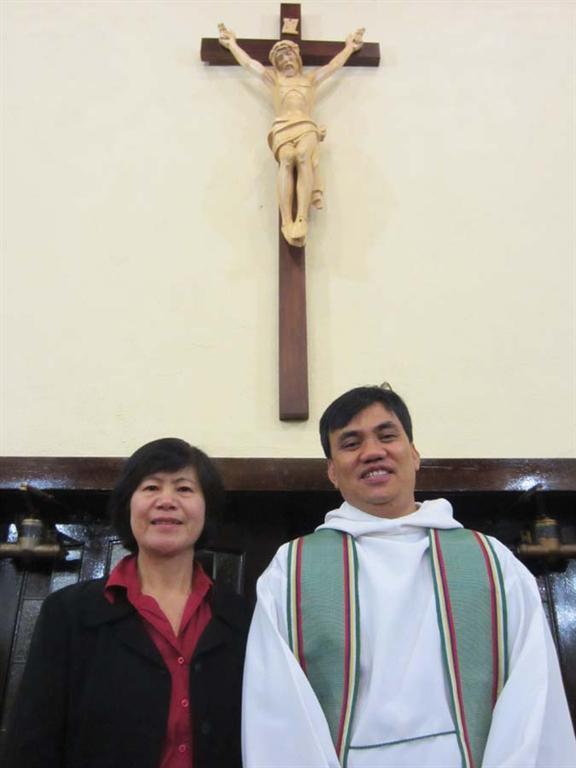 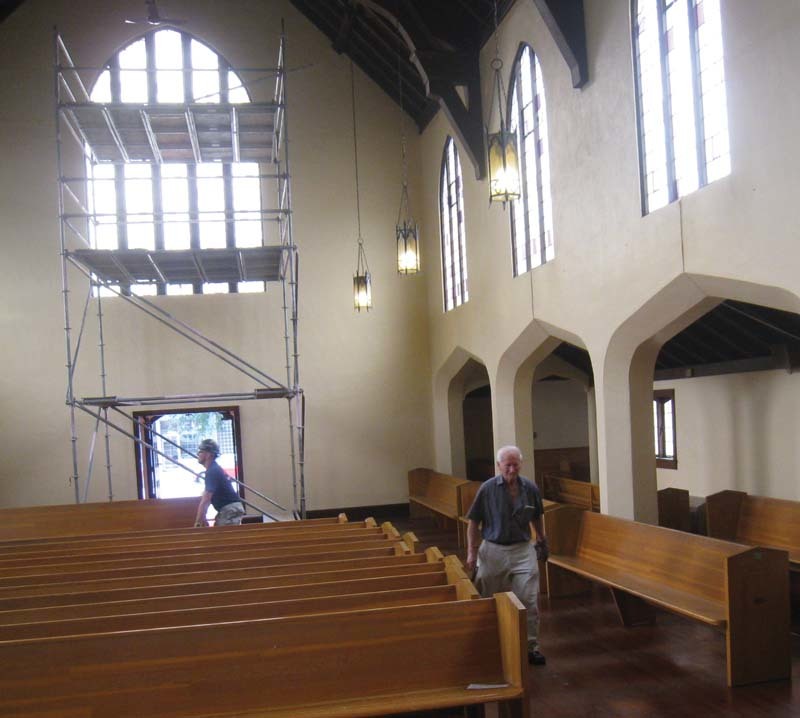 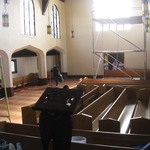 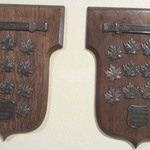 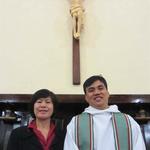 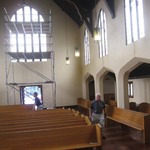 Restoration of the Sanctuary at St. Michael’s Multicultural Anglican Church in Mount Pleasant was completed in October of 2012, in its 124th year, and in the 110th year since incorporation.
For the five weeks the restoration was underway, the congregation worshipped in the hall (the former sanctuary). The most vivid testimonial arising from the restoration was the enthusiasm of volunteers. There were a thousand hours of congregational volunteer time that went into this work. When the congregation returned on October 21, 2012, they returned to a brighter, cleaner, less cluttered sanctuary. Many members of the congregation could point to ‘their spot’ where their time was made manifest, or where they laid out meals for volunteers.
Three moments stand out. The most reverential moment was re-discovering that two plaques (picture attached) containing the names of 23 parishioners from St. Michael’s were in fact, 23 men who gave their lives in war. One of these was an ordained priest. These memorial plaques are now in a place of honor. The most joyous moment was commemorating the completion of the restoration with a new memorial crucifix in the sanctuary (see photograph), completing the Stations of the Cross purchased by the Parish in 2010. The most graphic moment of the actual process was the installation of a huge portable scaffold, necessary for electrical work and interior painting. Our resident ‘Chief Engineer’, Terry Cutforth, ODNW (Invested in 2010), who was principally responsible for the scaffolding’s installation, informed us that in his 50+ years at St. Michael’s this was a first.
A 5-member Sanctuary Planning Committee had planning & oversight responsibility for theological and historical integrity, from colors to cut glass, and from memorial plaques to the new crucifix. Bart & Agnes Alatan, Brigitte Laweng, Rev. Wilmer Toyoken, and Greg Tatchell undertook to ensure consensus and consistency, while an independent three-member advocacy sub-committee undertook to represent the traditions at St. Michael’s.

Restoration of the Sanctuary included five primary points of emphasis: one, re-painting the entire sanctuary with a lighter shade; two, stripping down all the rich dark wood and refinishing it; three, re-doing the wood floors; four, substantially brightening the sanctuary by making several changes to the pre-existing lights and wiring; five, being very intentional with regards to what went back up on the walls, especially in light of the Stations of the Cross installed by the congregation in 2010, and the memorial crucifix purchased in 2012.
Along with the $100,000 in work over the last 5 years, including new furnaces, repainting, re-roofing, and new Stations of the Cross, completion marks the end of major projects at St. Michael’s for the immediate future. The blessing for the St. Michael’s community is that these projects have for the most part been congregational, and that the transformation and modernization of the sanctuary is perhaps the most visible manifestation of congregational vitality at St. Michael’s, its viability for the future, and its happiness at the Nov. 15th anniversary of Wilmer's first year as St. Michael's new Priest-in-Charge. Soli Deo Gloria.
Editors Note: There will be a Celebration of New Ministry for The Reverend Wilmer Toyoken at St. Michael's, Sunday, November 25th, 2012.

Images:  Top, the sanctuary in renovation mode. Upper left, the discovered Memorial Plaques. Middle right, Grace Wandag President and Chair of the newly revitalized ACW at St. Michael’s with Priest-in-Charge The Rev. Wilmer Toyoken in front of the new Memorial Crucifix. Lower left, Terry Cutforth in the foreground with scaffolding behind.