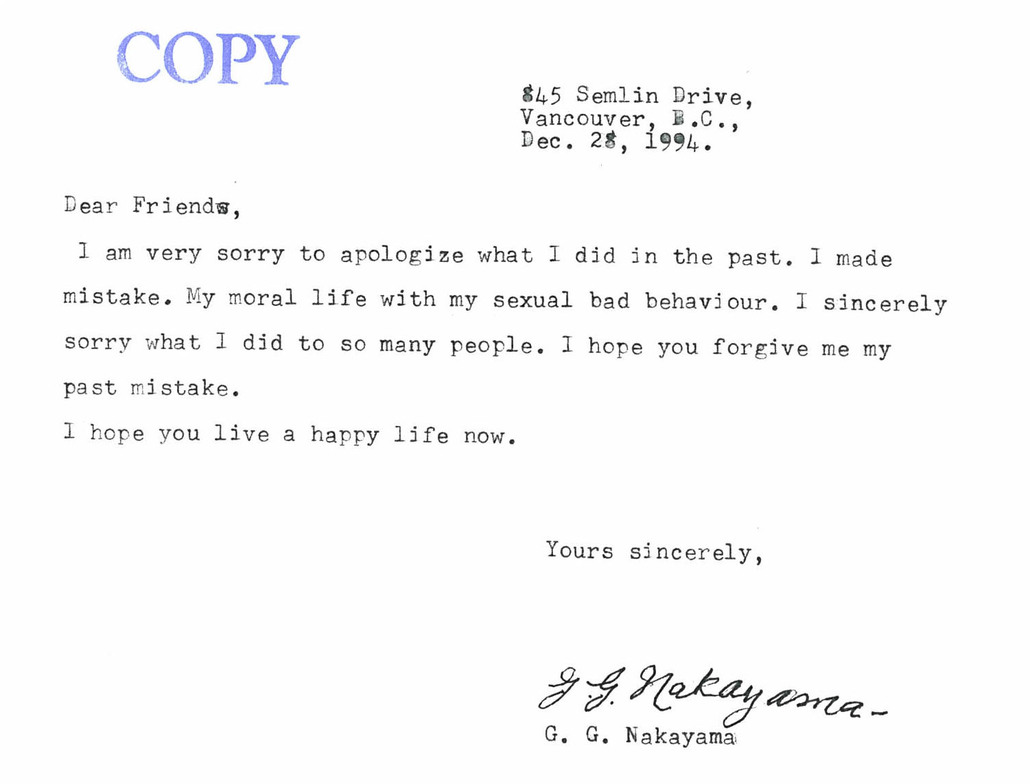 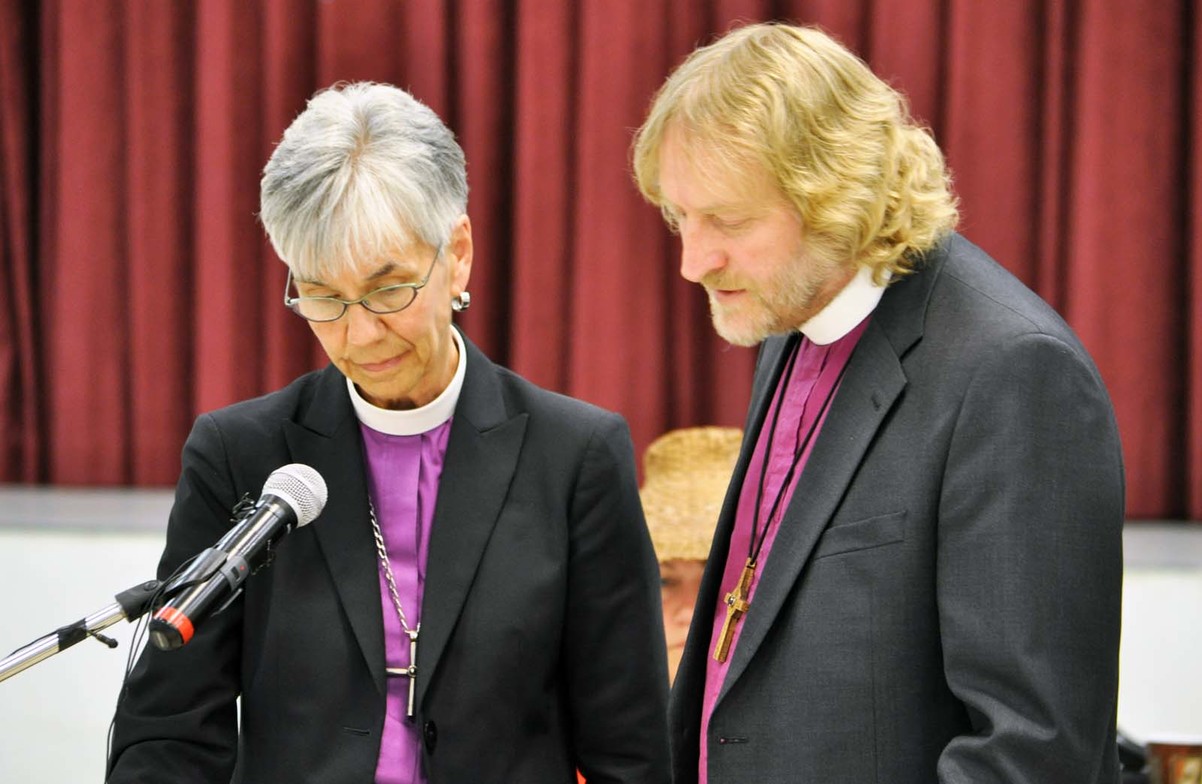 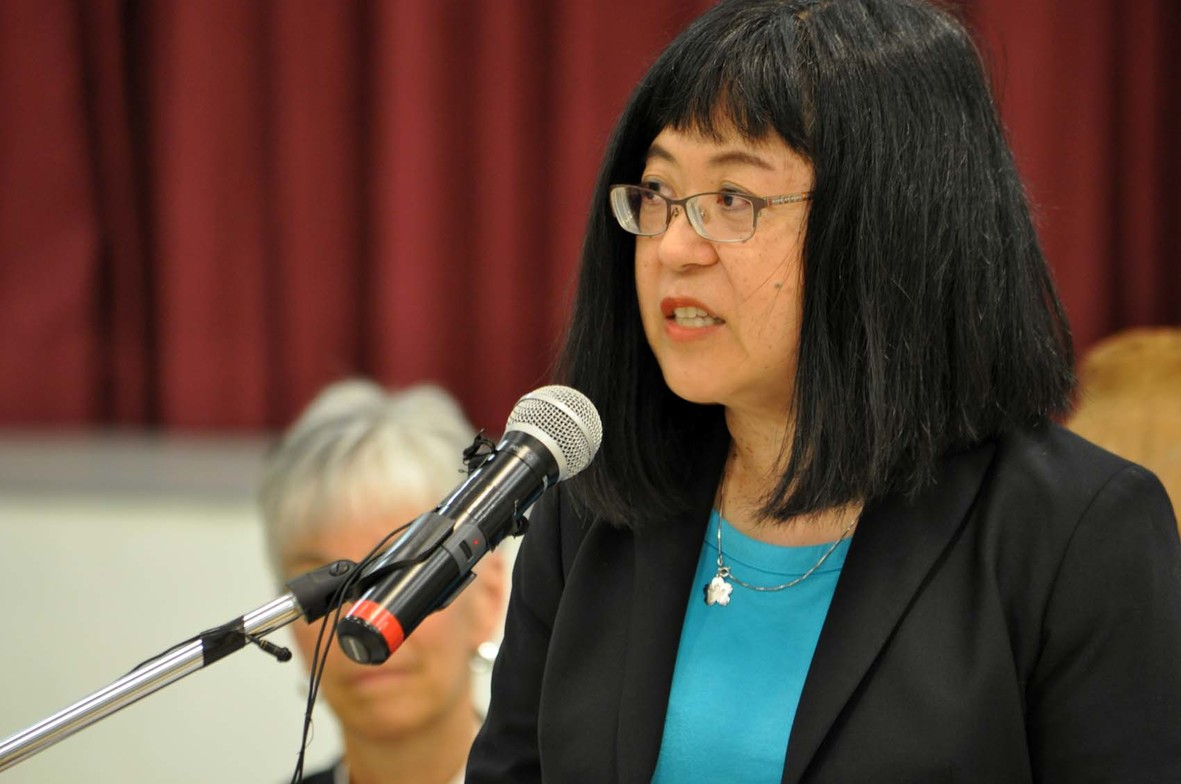 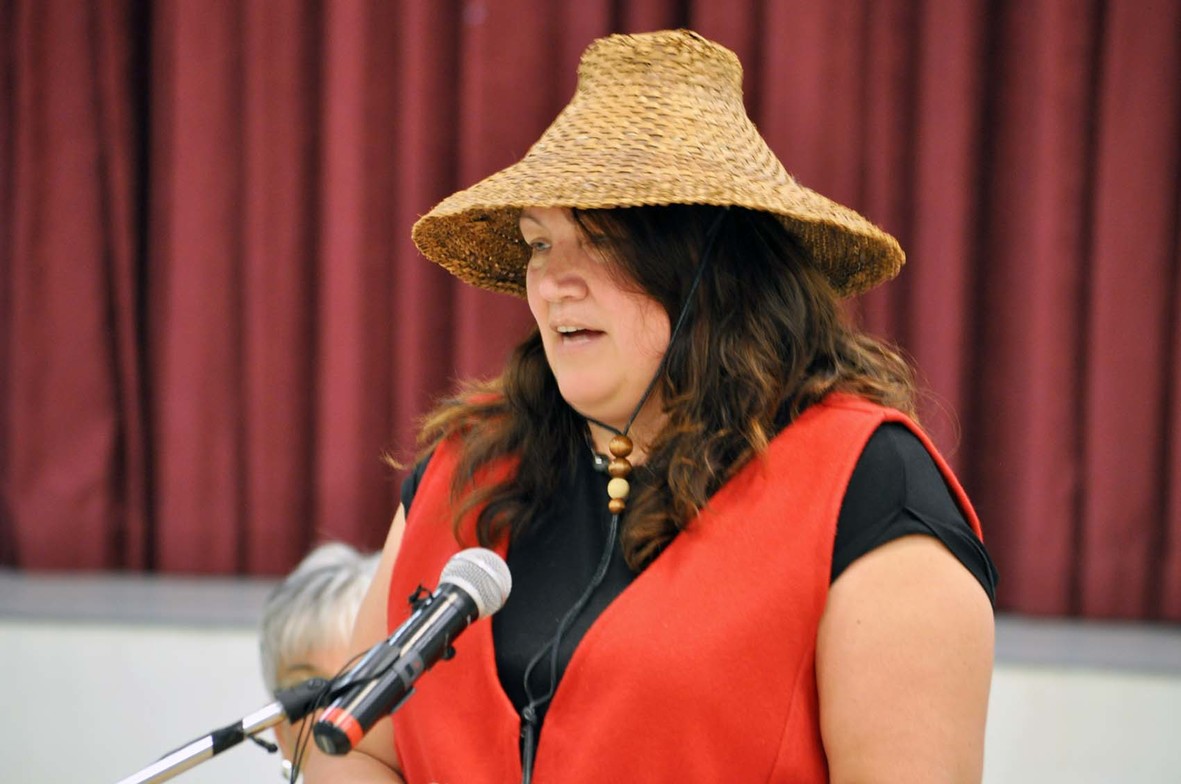 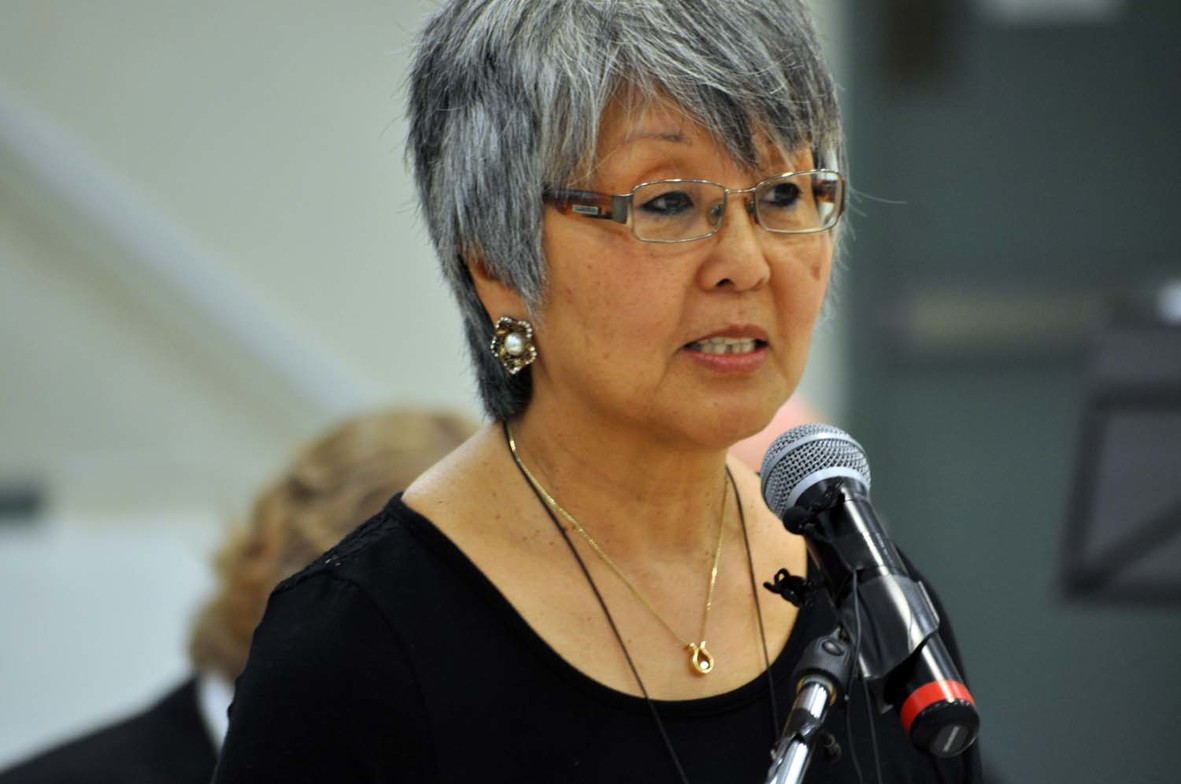 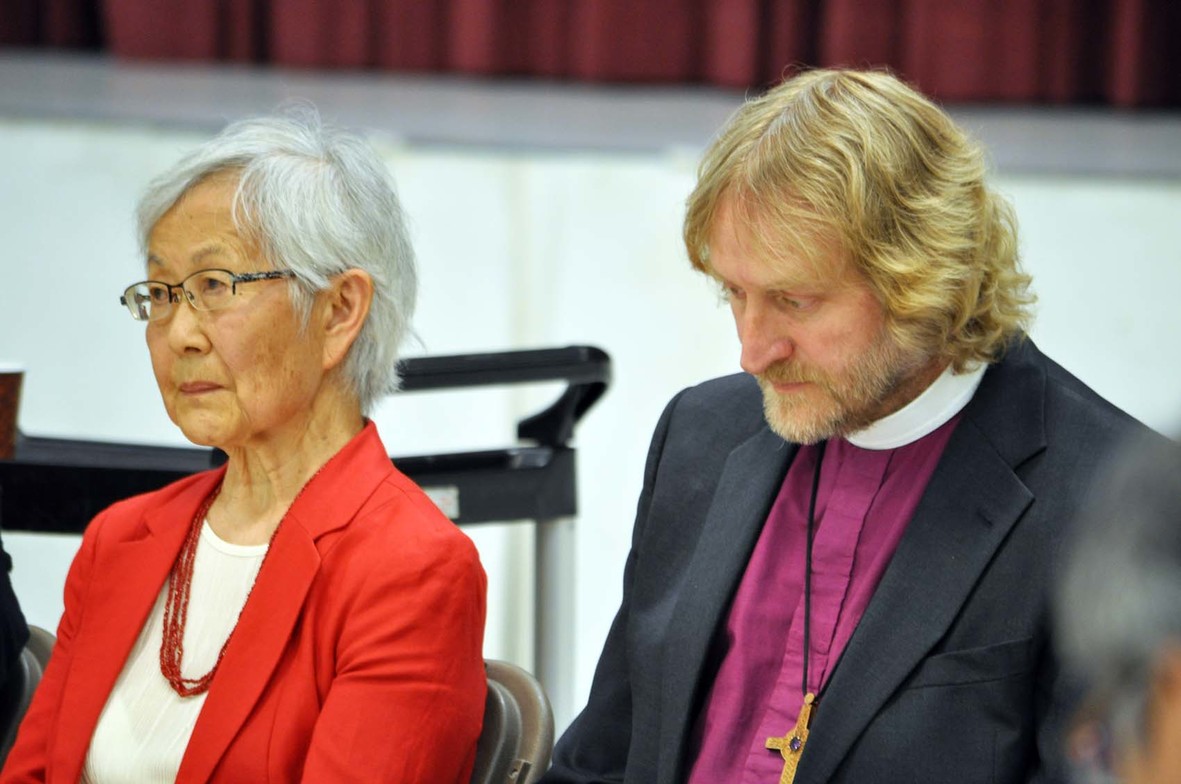 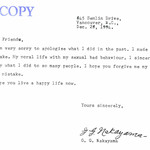 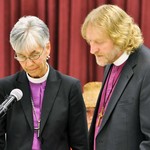 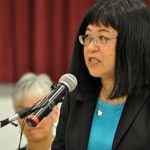 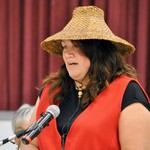 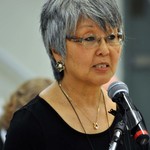 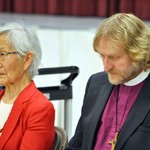 In the early years of the 20th century, the area now known as Vancouver’s downtown eastside was the bustling centre for Japanese Canadian culture in the young Canadian city. There are few remnants of those days remaining in that urban locale except for the Vancouver Japanese Language School facility constructed in 1906 and still going strong.
On Monday, June 15, 2015, The Vancouver Japanese Language School was the venue for a Gathering. An opportunity for people to hear and witness the Apology issued by the Right Reverend Gregory Kerr-Wilson, Bishop of the diocese of Calgary and the Right Reverend Melissa Skelton, Bishop of the diocese of New Westminster to all members of the Japanese Canadian Community affected by abuse perpetrated by the late Goichi Gordon Nakayama, former priest of the Anglican Church of Canada.

On this bright, sunny afternoon 60-70 participants and spectators and more than a half dozen representatives from the media sat on chairs positioned in a circle in the middle of the main auditorium of the venerable building to be part of the Apology and to hear the Response to the Apology given by Mary Kitagawa, a member of the Japanese Canadian Community with extensive knowledge of Nakayama’s abuse and the damage it did to members of her family and her community.

The programme began with Japanese Canadian Working Group (JCWG) Member and MC, Lorene Oikawa welcoming the panel and introducing Councilor Deborah Barker of the Squamish Nation who prior to offering a traditional blessing shared some personal reflections about apology and reconciliation in the context of Indian Residential Schools Survivors and the recent and ongoing focus of our nation on Truth and Reconciliation. Next to speak was Judy Hanazawa of the JCWG who gave detailed background about the process entered into by the JCWG and the representatives from the diocese of New Westminster who for the past eighteen months have met frequently in order to move towards today’s apology. Judy began by thanking the members past and present of the JCWG many of whom were present and she also thanked the three representatives of the diocese of New Westminster: the Venerable Douglas Fenton, Executive Archdeacon of the diocese of New Westminster and Archdeacon of Burrard; the Reverend Father Daebin Im, rector, Holy Cross Japanese Canadian Anglican Church and the Very Reverend Peter Elliott, Dean of the Diocese and rector of Christ Church Cathedral. Judy presented some details about information that came forward from a number of voices in the Japanese Canadian Community in early 2014 about the abuse perpetrated by Mr. Nakayama and the need to involve the Church. She constructed a timeline of events regarding the ongoing meeting process with the focus on the apology really beginning to develop in May of 2014. All involved realized that having the truth about the abuse emerge within the context of apology was essential in order for healing and hopefully reconciliation to take place.

When it was time for the Apology the two bishops stood at the lectern and took turns reading the twelve points of the apology:

2. After he had retired, Mr. Nakayama confessed in person and in a letter dated December 28th 1994 to the then Archbishop of Calgary that he had engaged in ‘sexual bad behavior . . . to so many people’.

3. Upon receipt of Mr. Nakayama’s confession, the then Archbishop of Calgary formally brought forward the very serious charge of Immorality against Mr. Nakayama on February 10, 1995.

4. Upon receiving this charge, Mr. Nakayama voluntarily resigned on February 13, 1995, from the exercise of priestly ministry.

5. It is not known how many young people were affected, and no complaints were received at that time.

6. We have been made aware of the impact and effect of these past actions by some of today’s survivors, whom we acknowledge and seek to support, along with those who have died, their families and friends.

7. We deeply regret that Mr. Nakayama while a priest committed these acts of immoral sexual behavior.

8. On behalf of our dioceses, we express our deep sorrow and grief for harm which Mr. Nakayama did, and we apologize to all whose lives have been affected by Mr. Nakayama’s actions.

9. We deeply regret this Apology was not delivered to the Japanese Canadian Community at the time of Mr. Nakayama’s confession, the charge of immorality, and his subsequent resignation from the exercise of priestly ministry.

10. We express our support to survivors, affected families, and community as a whole and deeply hope that this Apology encourages healing and wellness for all whose lives have been affected by Mr. Nakayama’s actions.

11. We commit to participation in a healing and reconciliation process with the members of the Japanese Canadian Community who were harmed by Mr. Nakayama.

12. And we assure you that the Anglican Church takes these matters seriously, and takes steps to prevent this type of behaviour.

She said that she accepted these words offered by the Church but said that she did not know how these words would be heard and understood by the survivors of the abuse. “These words are a good first step” she said. She went on to say that she hoped that the Church’s acknowledgment of not taking the proper steps to address Mr. Nakayama’s abuse will somehow bring some comfort to survivors. She said “the victims who are still alive are very elderly now…” Mary knows from personal contact with the survivors that they are still re-living the experiences, suffering silently, isolated…they were unable to share their experiences with their parents, they were and are very angry, filled with pain and frustration. Mary spoke of the suffering of four family members all survivors of Nakayama’s abuse, one family member is still alive and is still greatly troubled by his experiences.

Mary asked some of the hard questions, “Why didn’t the Archbishop report Nakayama to the authorities?” “Why did it take so long for the truth to emerge?”

Prior to the June 11th, 2015 publication of a story in the Vancouver Sun about the Apology which included information about Mr. Nakayama’s history, the Church had not been directly contacted by any survivors of abuse. However, on June 14th, 2015, Bishop Skelton of the diocese of New Westminster received an email from a survivor who is not a member of the Japanese Canadian community. This survivor did not signal in any way that they would follow-up further but this may indicate that getting the story out in the open may urge other survivors to come forward, and when they do the Church is committed to offering pastoral care and support to all those who have been affected - survivors and their families.

At the event, the JCWG had arranged for two counsellors with experience in helping people (and/or families) who have been traumatized by various situations to be on site. There was also a list made available by the JCWG of counsellors for people to contact in the future.

Now that the Apology has been offered and heard the journey of healing begins.

In June of 2016 now-Archbishop Greg Kerr-Wilson gave permission for Gordon Nakayama's 1994 "letter of confession" to be attached and available on the website of the Diocese of New Westminster.

It is available linked below.