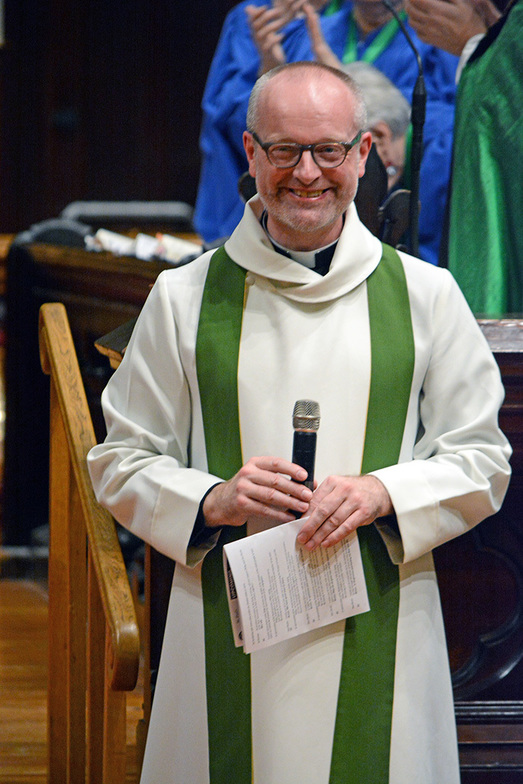 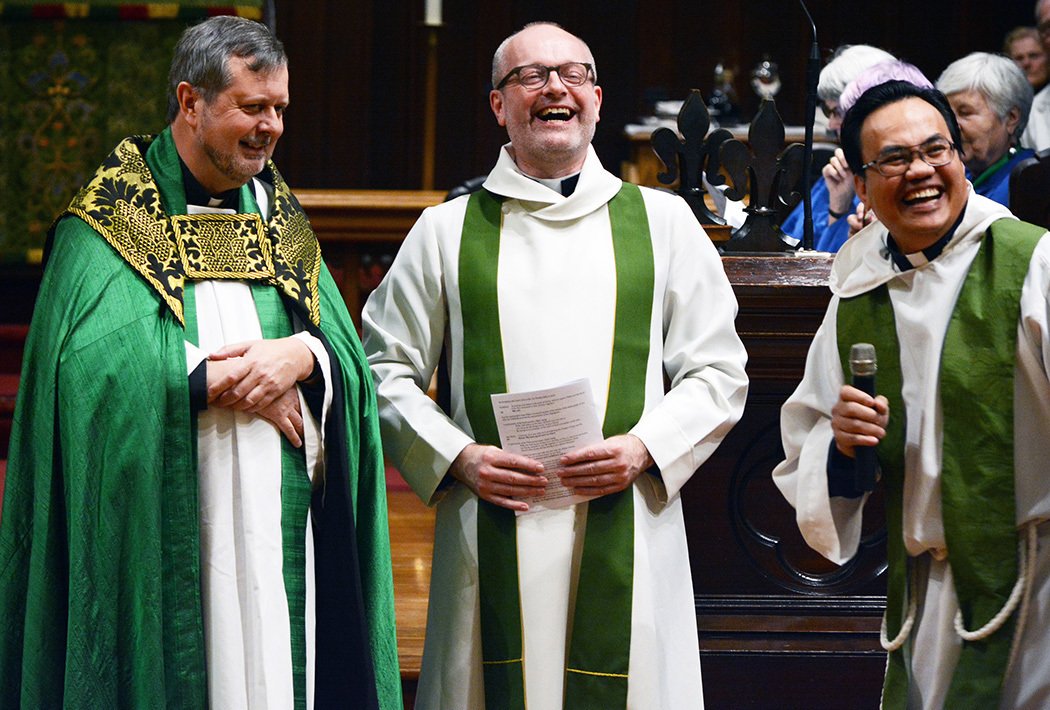 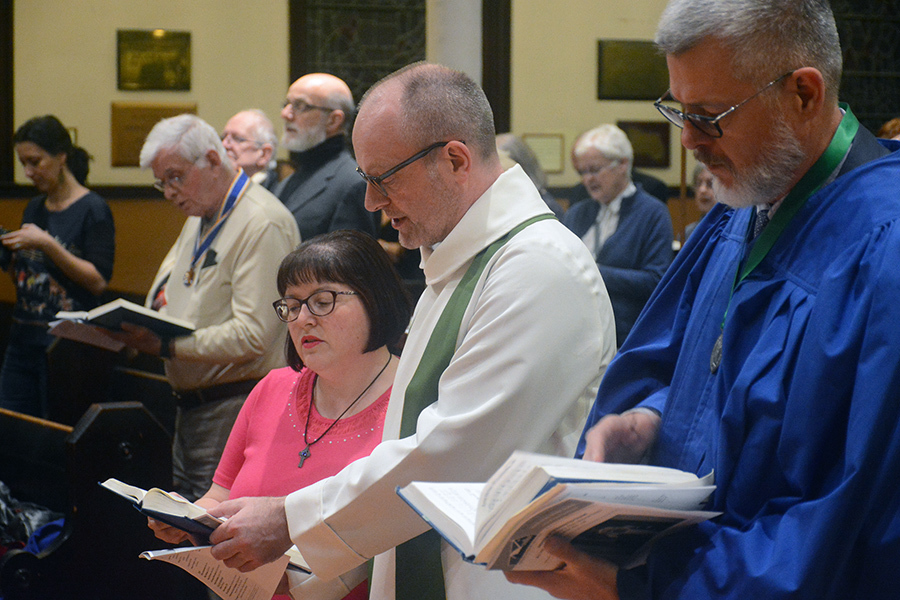 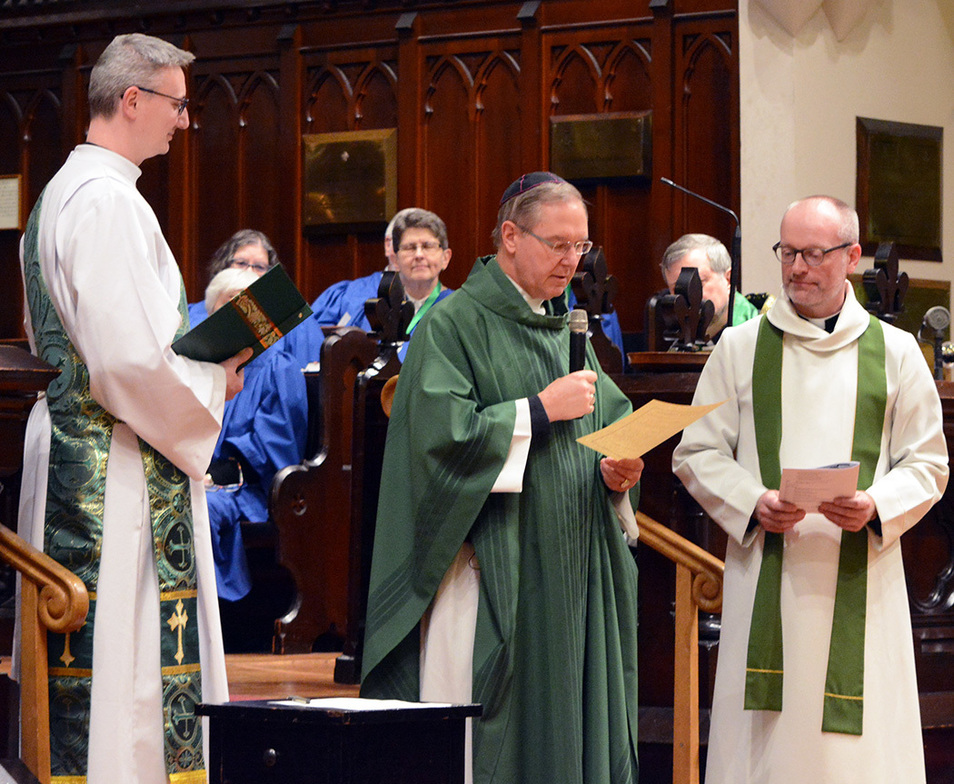 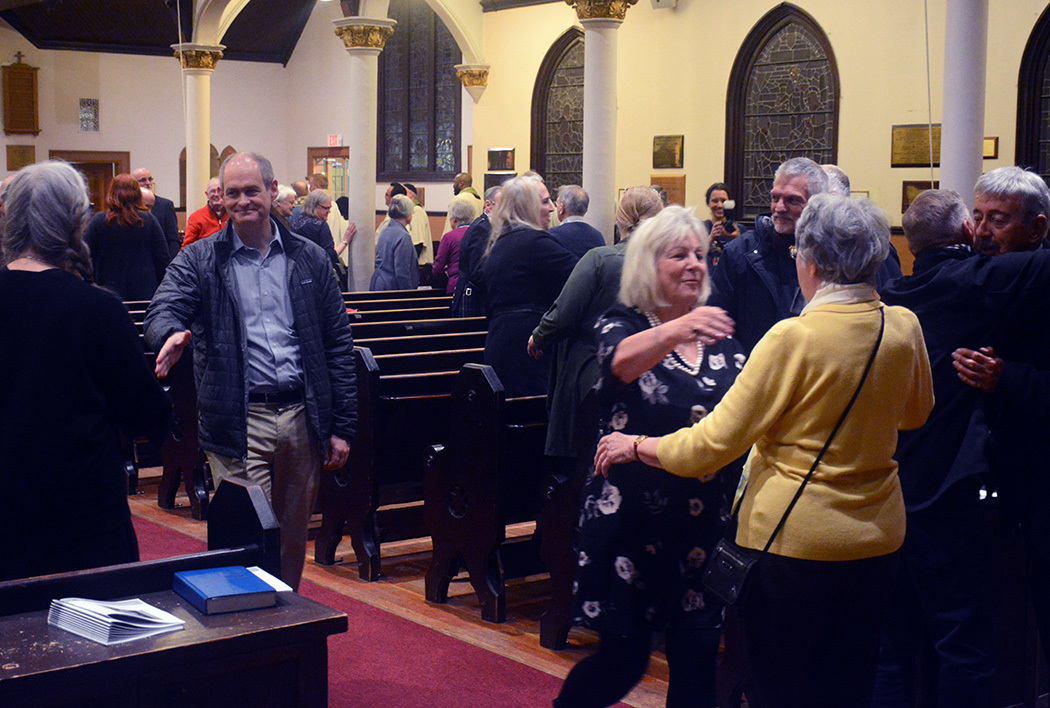 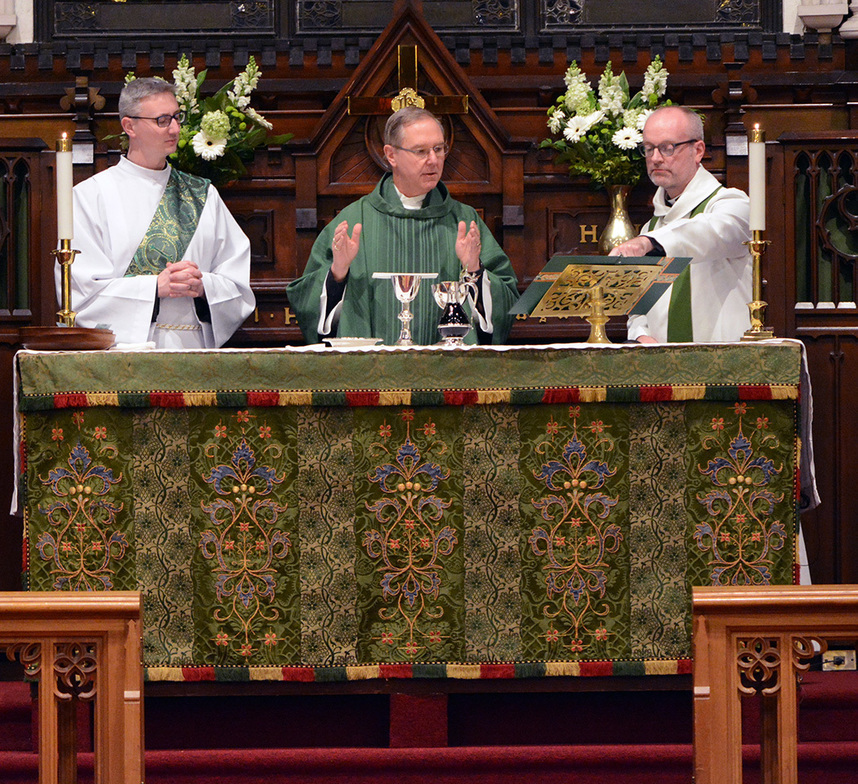 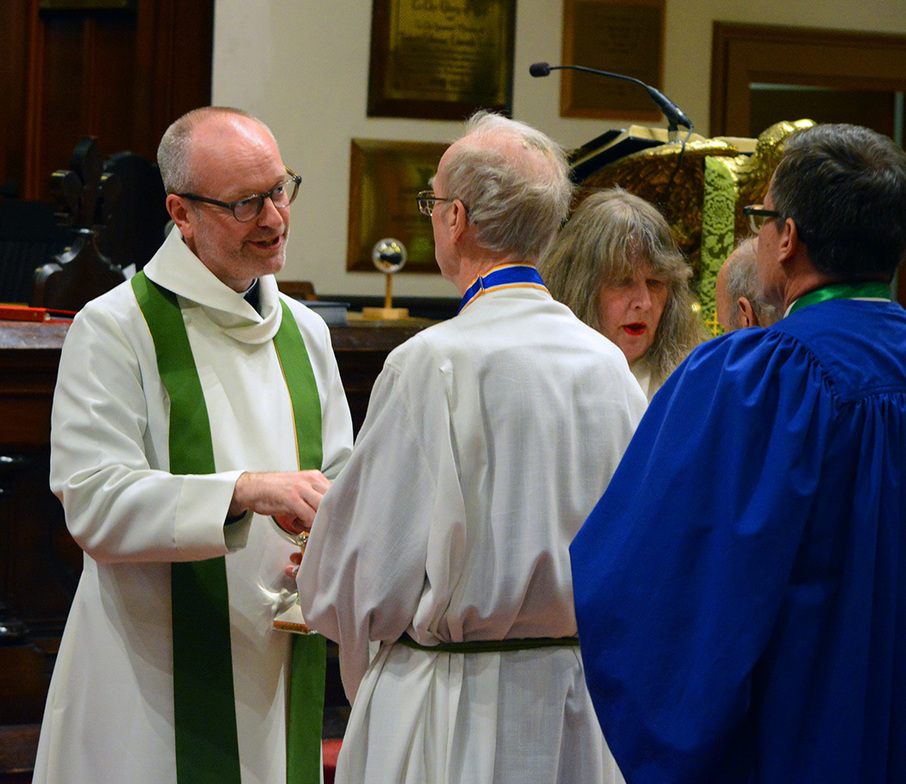 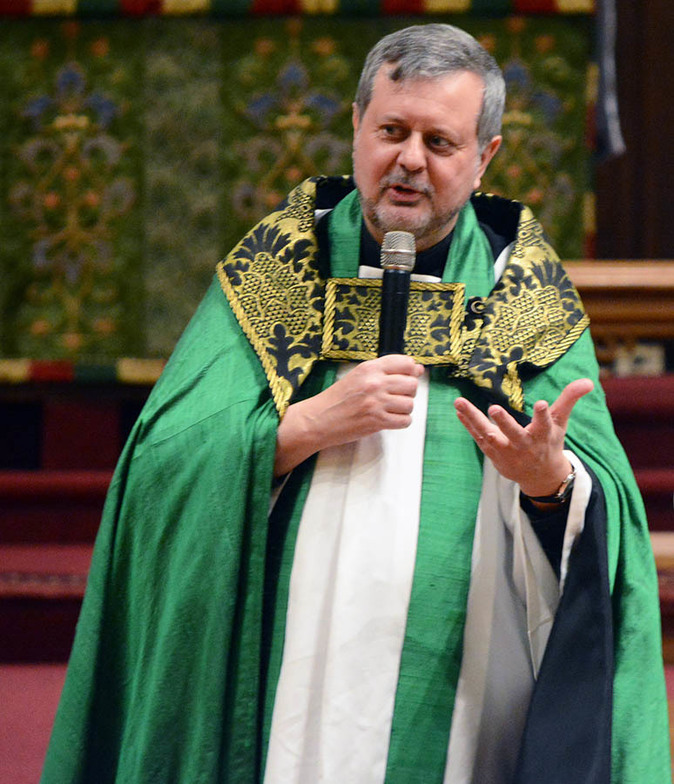 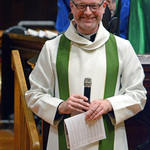 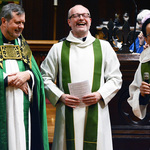 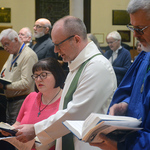 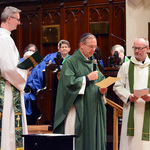 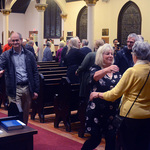 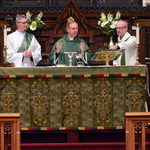 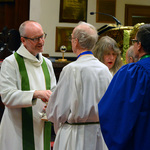 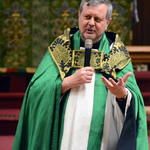 The “Little Red Church on Jervis” also known as St. Paul’s was rocking with joy on the evening of March 4, 2019, celebrating the Induction of the Reverend Philip Cochrane as Rector of St. Paul’s.

Since the departure of the Reverend Jessica Schaap who was the rector of the parish from August 1, 2013 until July 31, 2017, the parish has been well-served by Honorary Assistant, the Reverend Dr. Alain-Michel Rocheleau, Sunday Supply priests and the interim ministry of priest-in-charge, and now Rector of St. Timothy, Brentwood, the Reverend James Duckett who served from October 1, 2017 to November 30, 2018.

St. Paul’s is a resilient community and a parish where the members are engaged, active and able to fend for themselves. There is strong lay and ordained leadership, however, it was clear on the evening of March 4 that they were and are delighted to welcome the incumbent, a rector, an ordained leader of their shared ministry together.

The new rector, the Reverend Philip Cochrane most recently served as Vicar of St. Mary’s, Banbury in the Diocese of Oxford, Church of England. Rev. Cochrane had concurrent careers in finance and politics prior to his ordination to the transitional diaconate in 2007 and his priesting in 2008 in the Diocese of Portsmouth.

When asked about his knowledge of Canada, Vancouver and the West Coast and also to perhaps reflect upon his decision to move to a new country he replied,

I fell in love with the idea of Canada, British Columbia and Vancouver in particularly after reading about them as a nine year old child. The image of this modern city with the mountains and the sea just captivated me.  Also, I am a geek on church matters and so was well aware, and followed closely, the developments in the Diocese of New Westminster over the last couple of decades.

It is scary coming to a new country all on your own…..and it feels odd my moving further away from my grown up sons (it is usually the other way round).  It is a step of faith and I am glad to be taking it.

What has been so nice, is not having to negotiate my sexuality in my day to day life - that is such a wonderful liberating experience and allows me to get on with the job in hand.

When asked about his liturgical style and his current thoughts on shared ministry at St. Paul’s he said,

No one would ask me to lead a High Mass (though happy to preach!) but I actually have a broad range. I am happy leading a BCP 1662 service, classic parish Eucharists (said and sung) and also informal / charismatic worship in a variety of settings.  Each is important and nurturing. I suspect most people would say I inhabit the liturgy in a distinctive way - people use words like ‘energy’, ‘joy’, ‘passion’ or ‘joy’. I am just me!

(As far as current plans in ministry at St. Paul’s) Honestly, to see what God is going to do!  This is a risky adventure for both St Paul’s, myself and possibly the diocese - I am excited about the potential that we have to transform lives both inside and outside of the church.  I am really excited to learn how to develop Christian formation in this context for all ages and stages and grappling with the challenges and excitement of spiritual and numerical growth.  I am expectant that St Paul’s will continue to be renewed and I am delighted to be in a place where I am affirmed as a person as I am. I don’t know how that will feel, quite honestly, it is hard to get used to!

One of the unusual twists of this particular induction was the absence of Archbishop Skelton. Following her trip to the Episcopal Diocese of Northern Philippines February 17-27 the archbishop contracted the rotten cold and flu currently circulating and was unable to attend. The officiant and celebrant was the Executive Archdeacon of the Diocese of New Westminster, the Venerable Douglas Fenton.

Preacher for the Eucharist was the Venerable Fr. Kevin Hunt, Rector of St. James’ and Archdeacon of Burrard. In his homily Fr. Kevin focussed on the enthusiastic evangelism of the two people whose ministries are commemorated on March 3, John and Charles Wesley, and how the ministry of the Wesley’s can serve as a model for a modern evangelist like the new rector, the Reverend Philip Cochrane.

(A video of Fr. Kevin's homily is available through this link)

There was an excellent turnout of parishioners for the Eucharist including a full choir under the direction of organist and director of music, Michael Molnar. Leading the music in worship with a full range of congregational hymns, the choir also contributed two anthems during Communion. “Let My Prayer” by John Blow and “If Ye Love Me” by Thomas Tallis doing an excellent job of interpreting the music of these two well-known composers of the English Baroque.

Following worship it was downstairs to the St. Paul’s parish hall for some snacks, wine a scrumptiously rich chocolate cake and some conversation.

Please keep the Reverend Philip Cochrane and Parish of St. Paul’s in your prayers as they begin this new stage of ministry together in Vancouver’s West End.

Many more photos with captions are available in a photo album at Anglican Conversation, the Facebook page of the Diocese of New Westminster