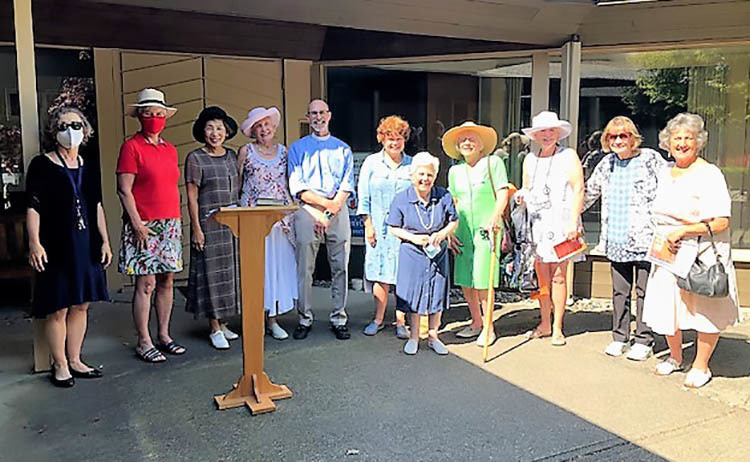 On Sunday July 4, 2021, there were more than just the Americans celebrating. St. Stephen’s, West Vancouver broke out from COVID slumber and worshipped outside, beneath trees, on the plaza, in the sunshine, with palpable joy for all to be together again! There was one more added pleasure to enhance the celebration: the new rector, the Reverend Ken Vinal, led his first church service to the delight of the congregation now able to gather, although still with limitations.

St, Stephen's new ordained leader has come to St. Stephen’s from Florida, via Whistler, succeeding the recently retired Canon Jonathan LLoyd. Canon LLoyd returned to his home and family in England in the spring where his very first grandson was waiting to greet him. Starting a new ministry outside in the sunshine may be a first for a new rector, in a space with folding chairs, birds flying overhead, and a distant piano under the capable fingers of Minister of Music, Dr. Annabelle Paetsch. No singing was yet allowed, but there was great enthusiasm in the reading of Psalm 95, “Come sing to the Holy One!”

Rev. Vinal gave a sensitive homily that he referred to as a “Reflection." His message was centred on caring and love. It was well received by the members of the parish present who have deeply missed regular access to worship, learning about the Christian faith, and being with each other. In an inspired aside Ken mentioned that next week the congregation would offered coffee hour after the service. The “new normal” sounds promising!

Photo by John Ruddick of some of the congregation at Sunday’s service in the courtyard of St.Stephen’s West Van.