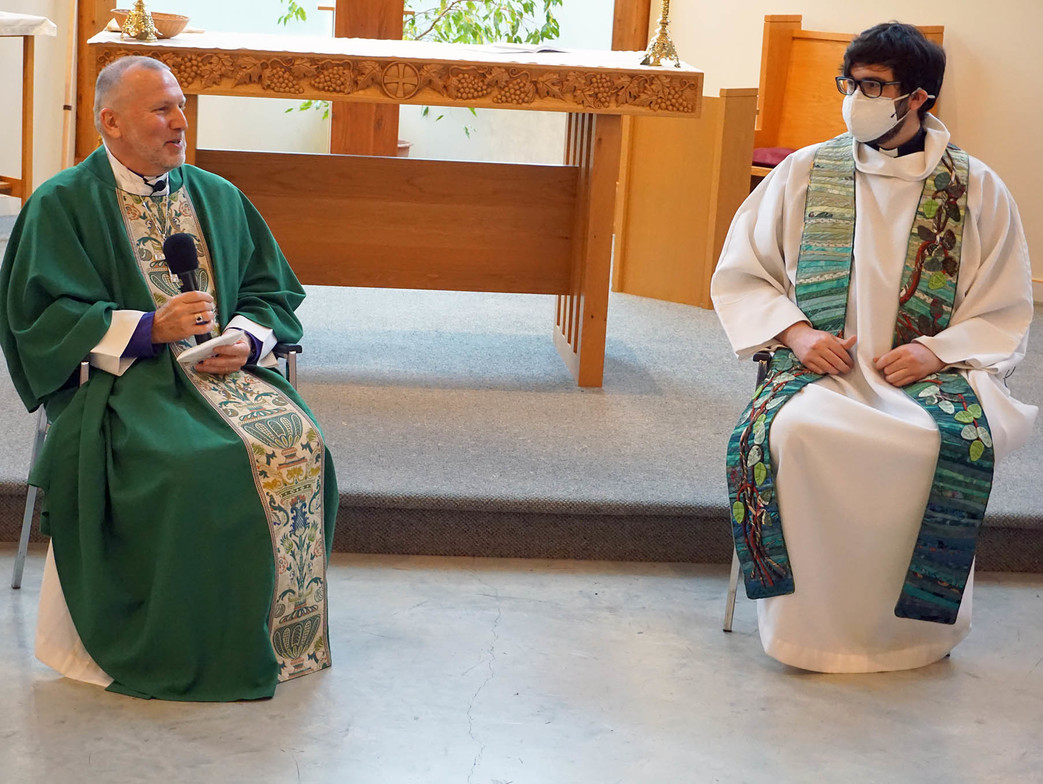 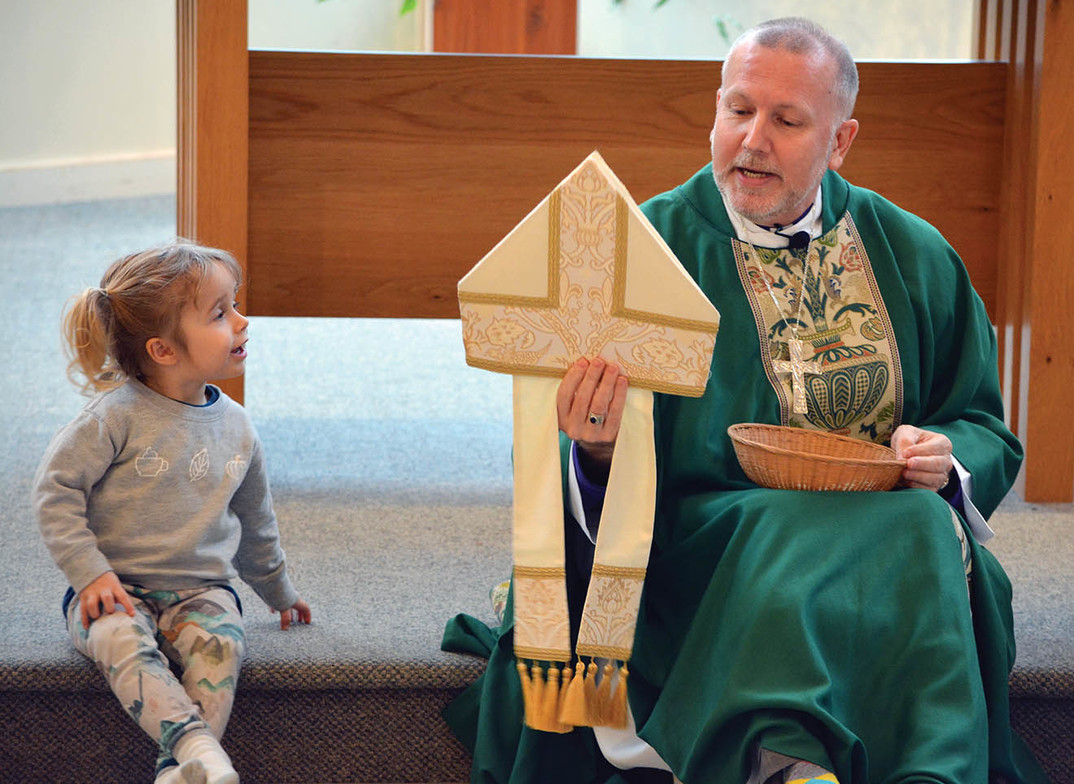 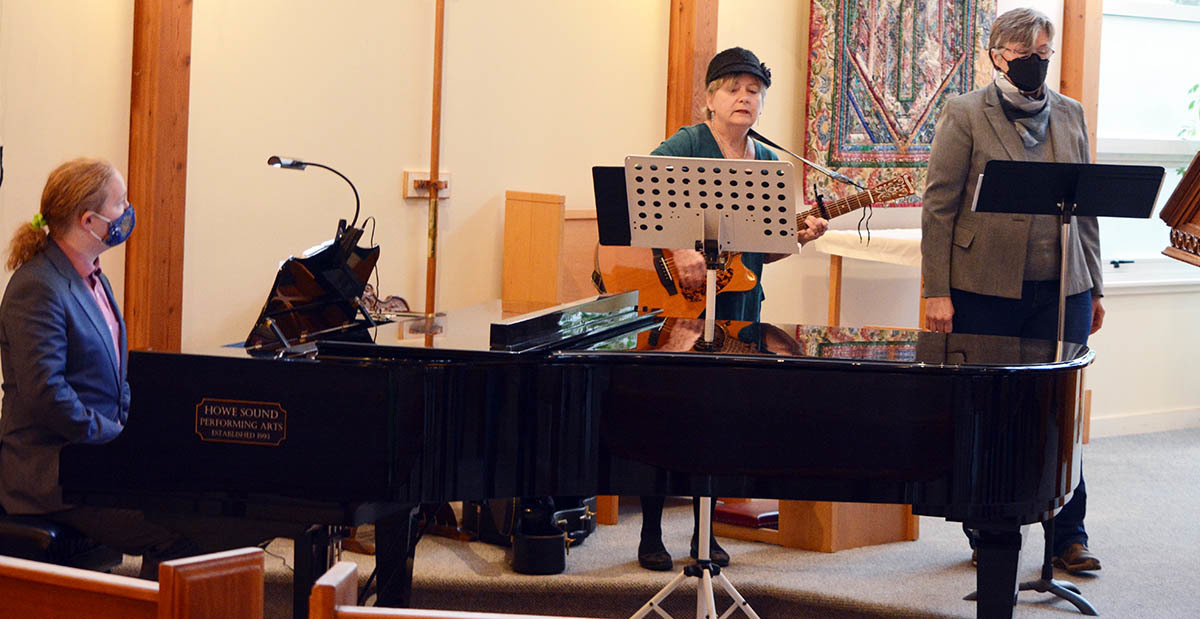 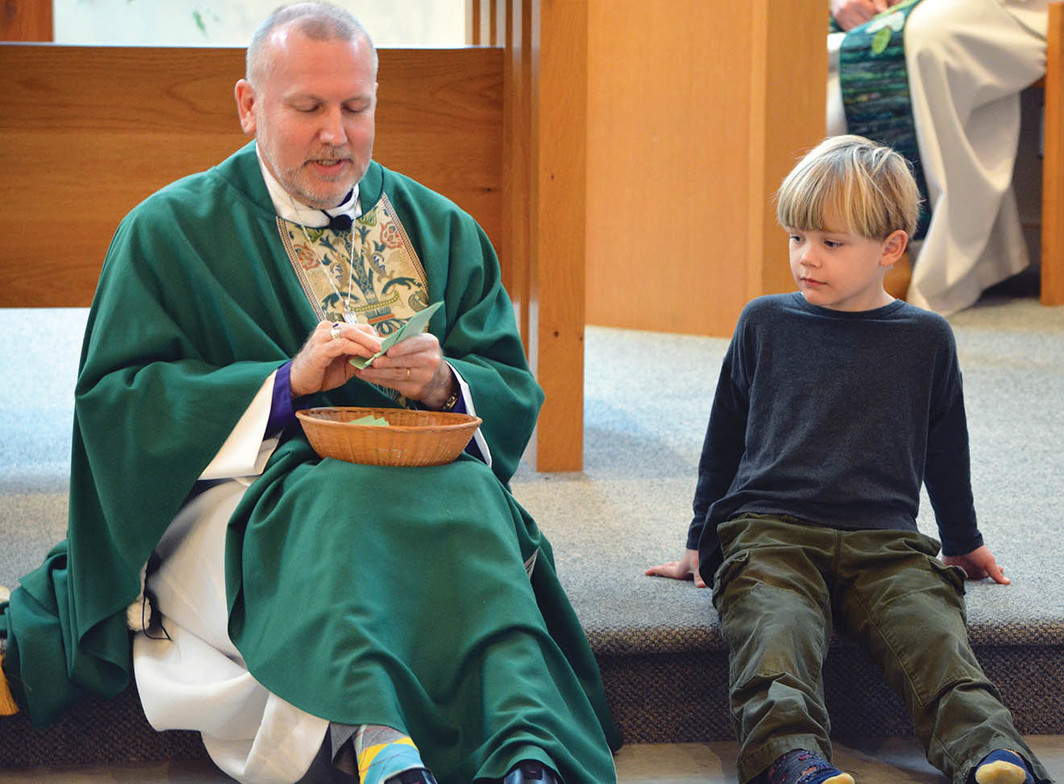 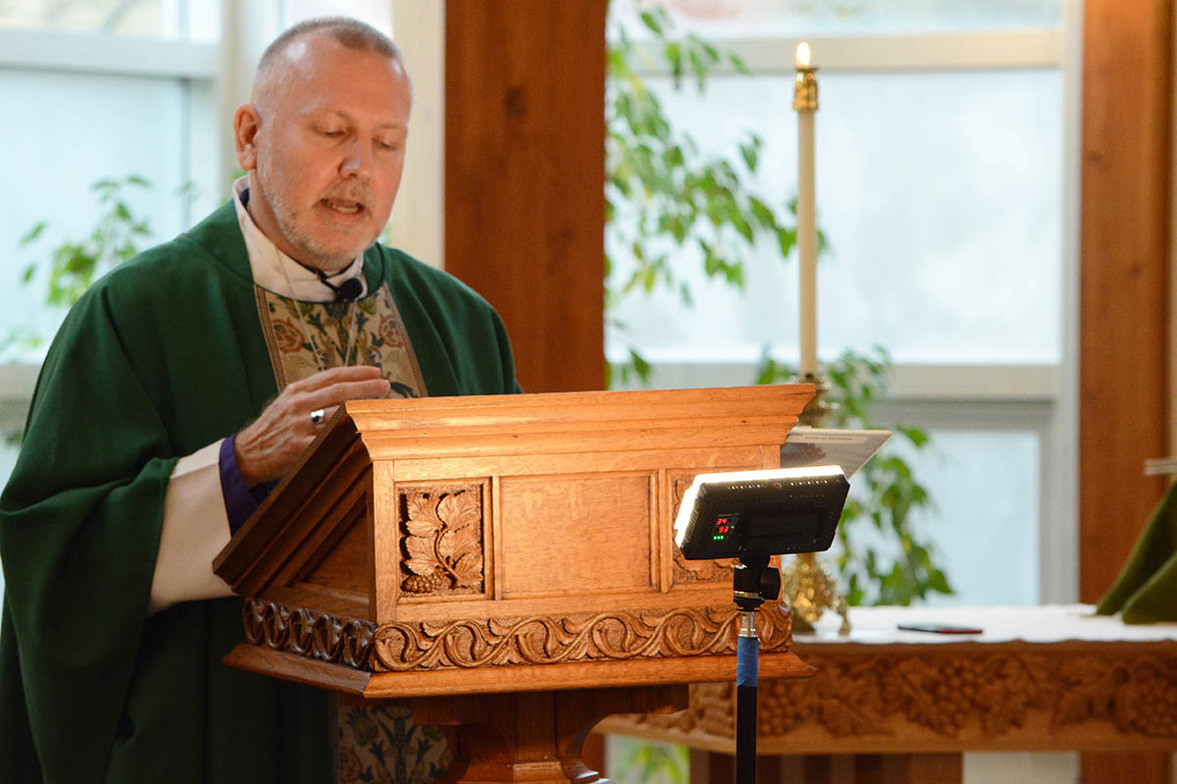 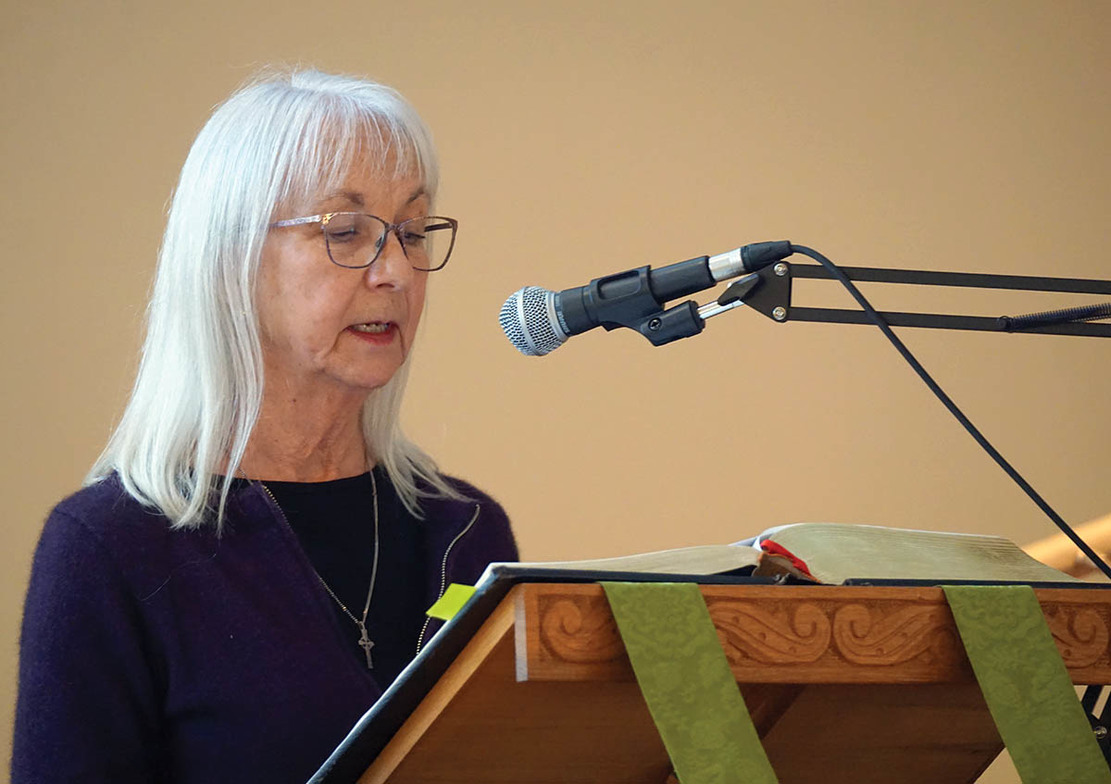 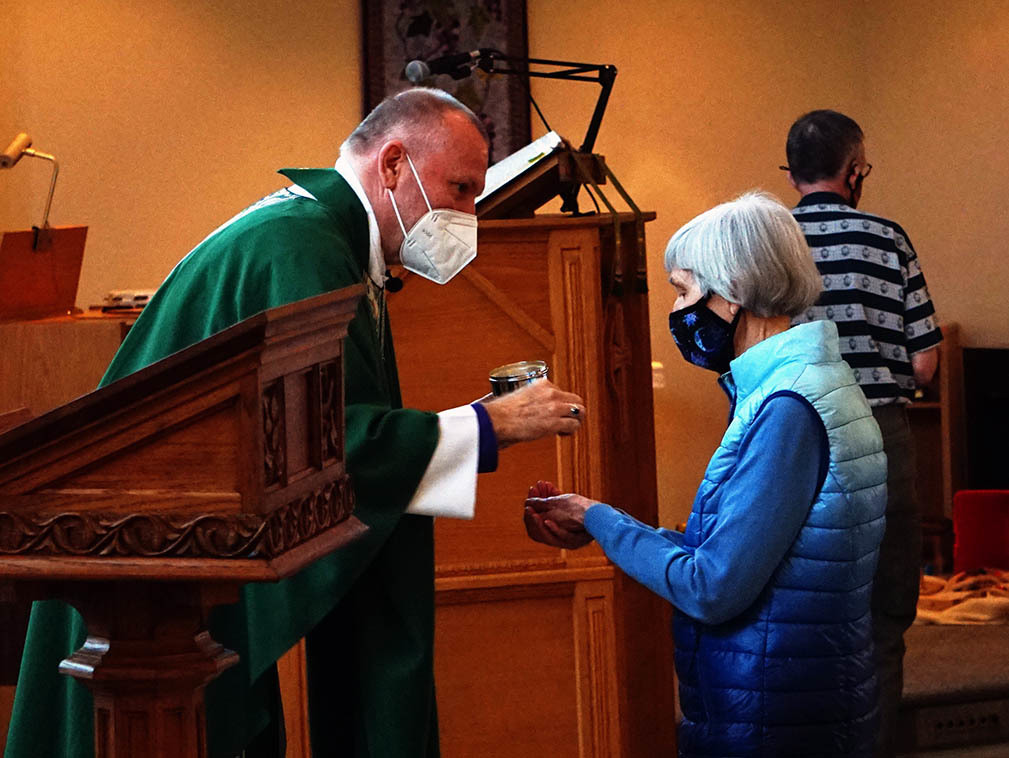 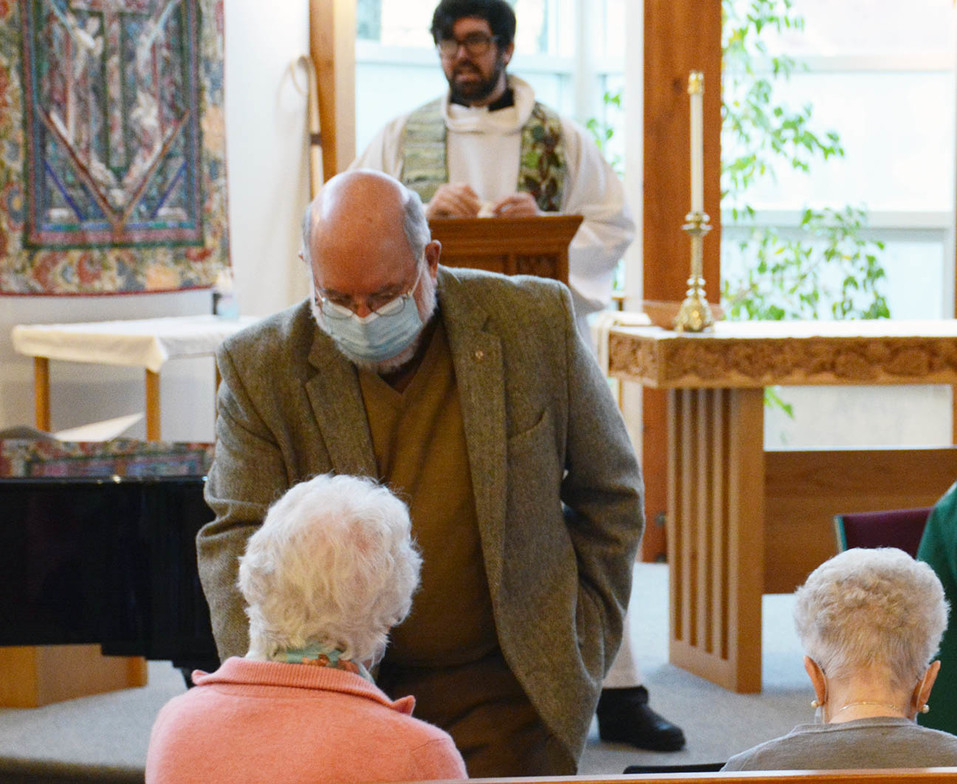 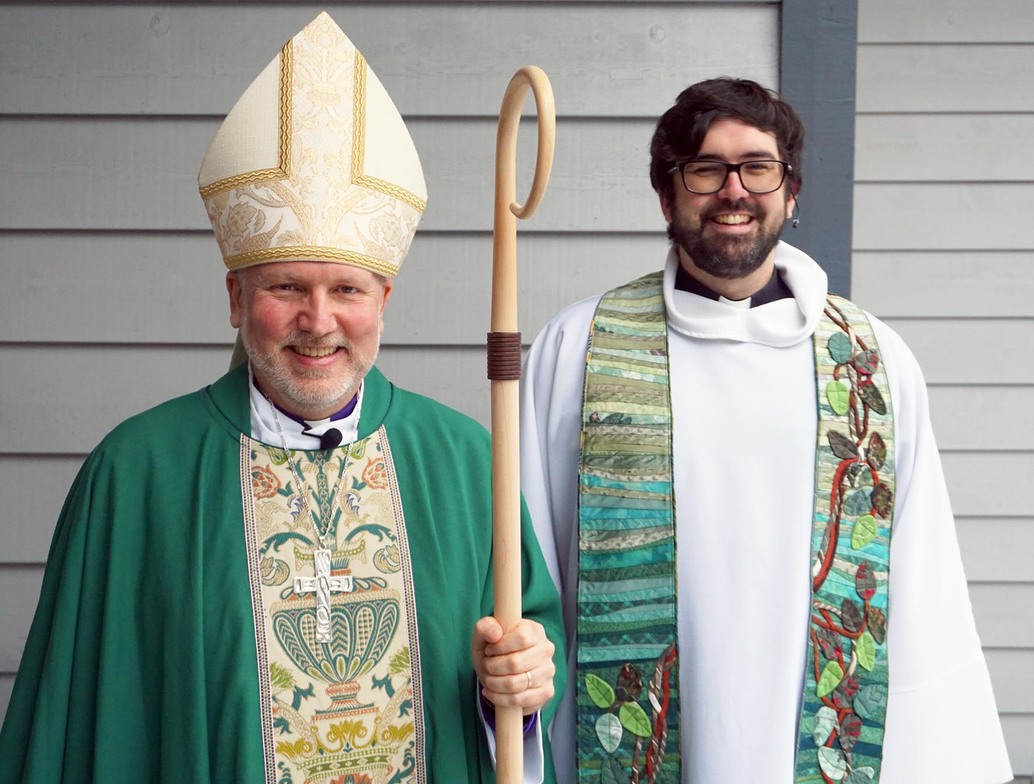 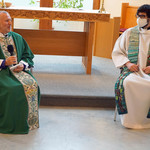 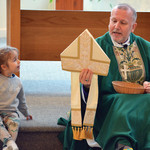 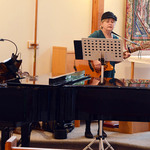 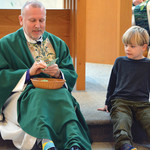 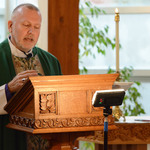 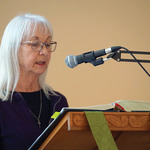 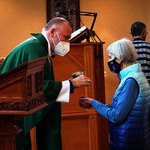 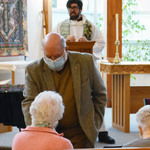 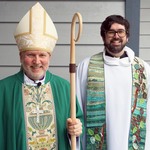 On a rainy Sunday morning, January 30, 2022, the Fourth Sunday after Epiphany, Bishop John Stephens visited his Parish of St. John the Divine, Squamish. St. John the Divine is located in the Garibaldi Highlands neighbourhood about five kilometres north of the Squamish townsite on the Sea to Sky highway. For those of you interested in “things regional” it’s about halfway between Squamish and Brackendale, home of Brackendale Eagles Provincial Park one of the most beautiful vistas in the Diocese of New Westminster.

An episcopal visit is always something that is looked forward to by Bishop John and by the parish, however, this one was of note as St. John’s was the first parish in our diocese where the-then Reverend John Stephens served as rector. He was inducted by the Right Reverend Michael Ingham, December 5, 1995, and remained until his appointment as Rector of St. Philip, Dunbar in 2001. During his time in Squamish, Bishop John and spouse Ruth welcomed their two children. The current church building with a somewhat modest exterior and a chronically “troubled” roof boasts a visually striking interior that architecturally echoes its geographical location and the presence of the Divine. It was built by the parish during the bishop’s incumbency to accommodate the growth and development that took place during those years.

St. John’s current rector, the Reverend Cameron Gutjahr was inducted by the Most Reverend Melissa Skelton on July 23, 2019, less than two months after being ordained to the priesthood. The two clergy have a lot in common, both were raised in the Anglican Church on Vancouver’s westside, both did undergraduate science degrees at UBC and both spent time in Ontario during their early formation; Bishop John’s first incumbency as priest-in-charge of a three point parish in the Diocese of Huron in the southwest region of the province and the Rev. Gutjahr studied and graduated from Huron University in London, Ontario. Both have a passion for social and climate justice and a deep love for the Anglican Church.

The liturgy was livestreamed via YouTube and there was good contingent of worshippers in the sanctuary; couples and families in proximity, and those attending on their own maintaining the prescribed physical distance.  All were masked except when speaking or leading the music in worship.

Bishop John was preacher and celebrant. And yes, there were some children present at the Eucharist. Two youngsters joined the bishop on the chancel steps for the “Children’s Talk” as he explained the symbolism behind the mitre and crozier. In an offertory plate he had numerous pieces of blue paper and spoke to the children and to the congregation about the Holy Spirit guiding us to pray for people, even people that we have trouble liking.  He asked people in the congregation and the children to think of people they find hard to like, to represent them on the pieces of paper which Bishop John had prayed over.

Keeping with this Epiphany practice, the parish’s Honorary Assistant, Canon Donald Lawton announced that he had prepared several wrapped confectionary items each one containing a scriptural quote which could serve as a guide for the coming year for the recipient. Canon Lawton distributed these after worship and prior to the informal Q&A session when members of the parish were encouraged to engage and, in some cases, reconnect with Bishop John.

In his sermon, the bishop spoke about his time in Squamish that began 26 years prior, an enthusiastic endorsement of their rector; and a look at the Epistle, 1 Corinthians 13:1-13, the Gospel, Luke 4:21-30 through examples of the life of Roman Catholic activist, Dorothy Day and the Trappist Monk, Thomas Keating.

The bishop’s sermon is available here in video, audio and text on the diocesan website.

The parish welcomed a new musician, pianist AJ McCalla who accompanied the hymns and offered a prelude and postlude. The Reverend Gutjahr’s mother, Erica Northcott served as reader, cantor, psalmist and soloist augmenting the worship with her beautiful soprano voice. The intercessor was Rita Carey and musician Carol Grolman led the communion hymn, with vocal support of Erica Northcott and guitar accompaniment, and accompanied Erica on the piano during a solo offering.

In the opening paragraph of his homily Bishop John shared his feelings about returning to St. John’s:

I have so many wonderful memories of this building, this parish community, and this town of Squamish. Both of my children were born while we lived here and this continues to feel a part of my  home. I am grateful for the ministry that has continued to take place since I left here in  2001, it is hard to believe it was that long ago.

Bottom of the body copy: