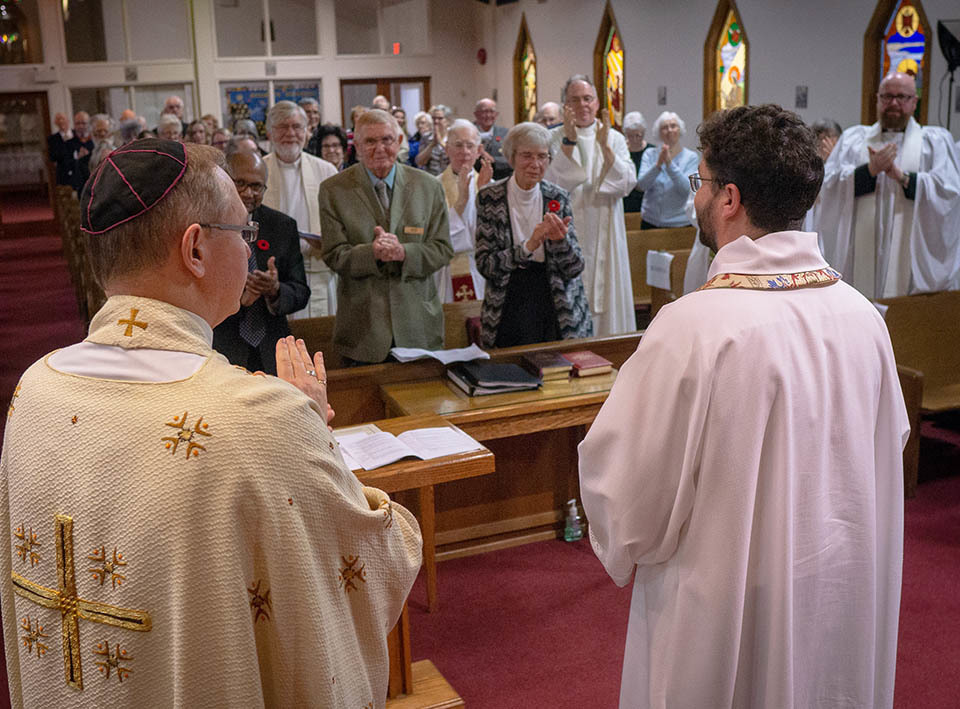 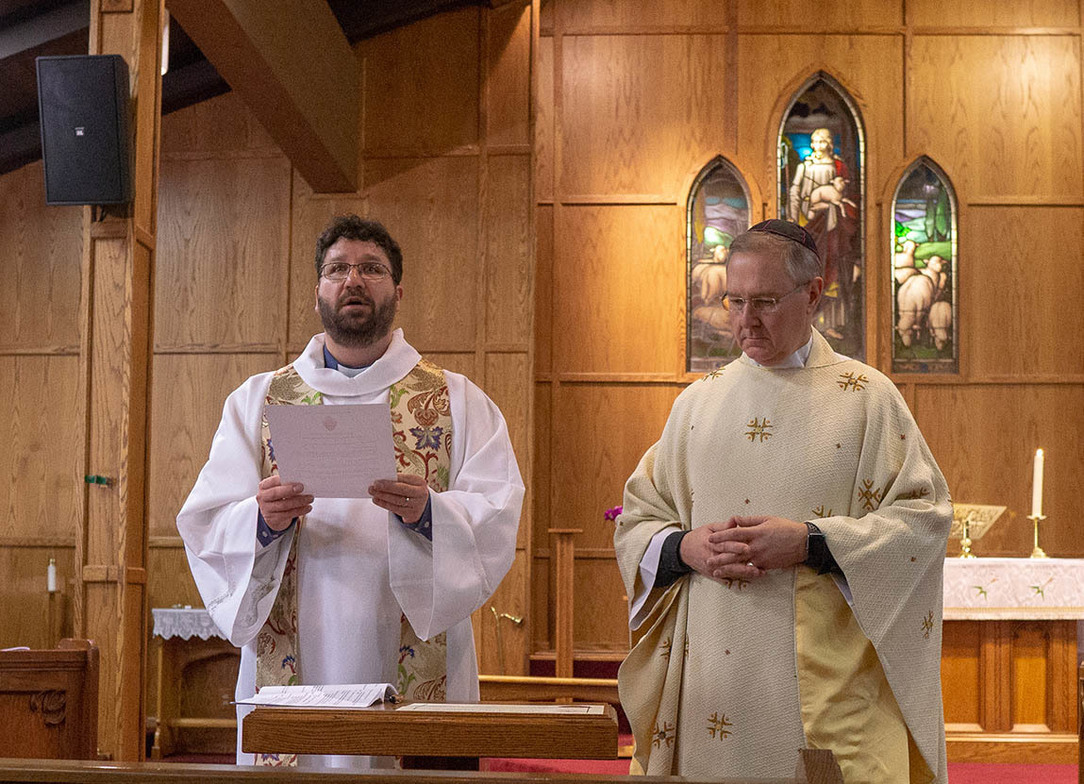 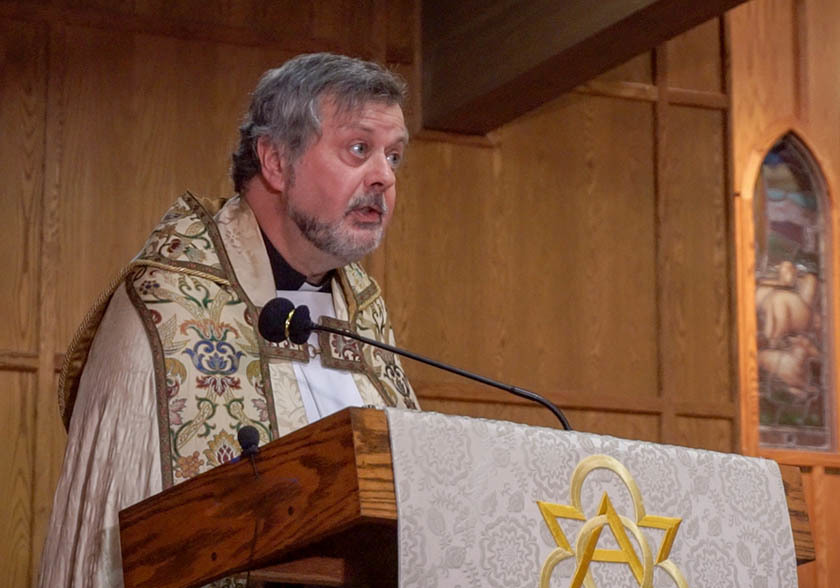 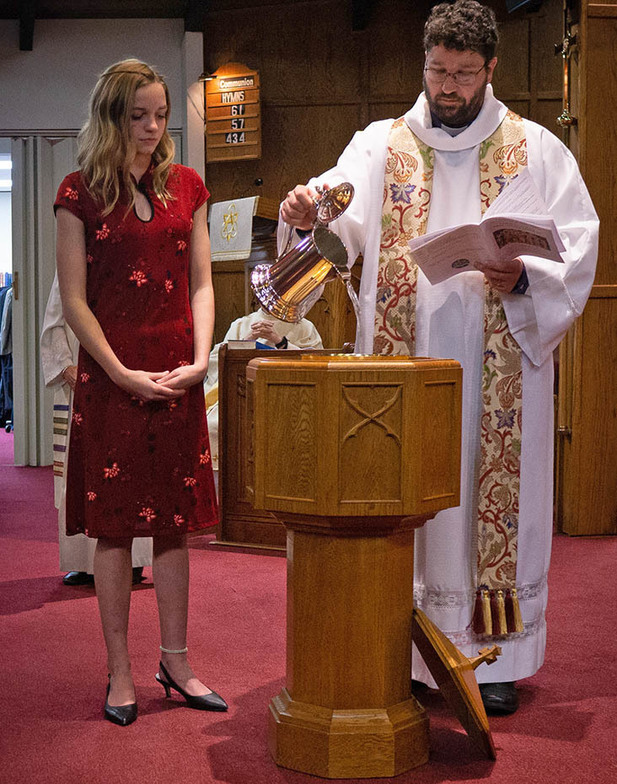 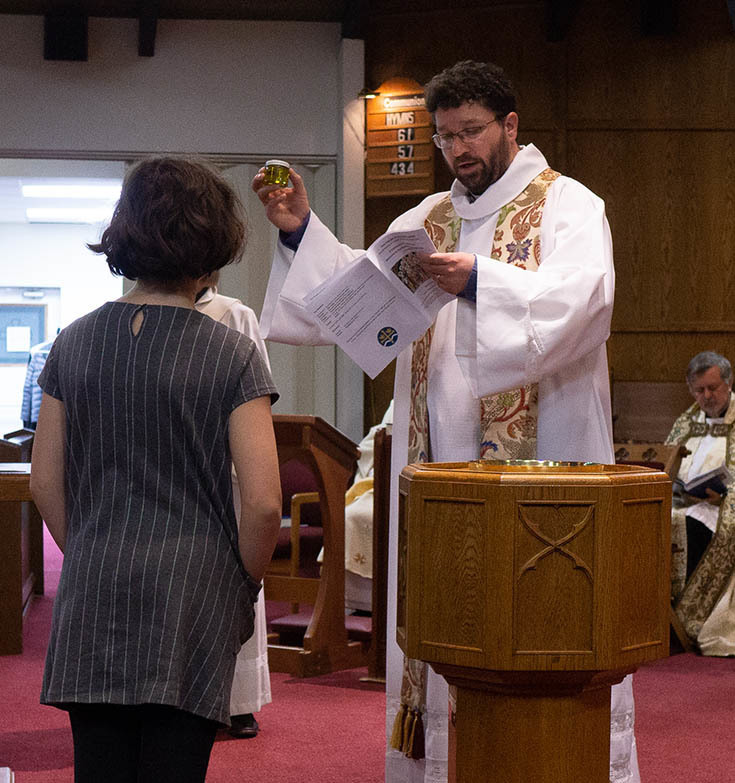 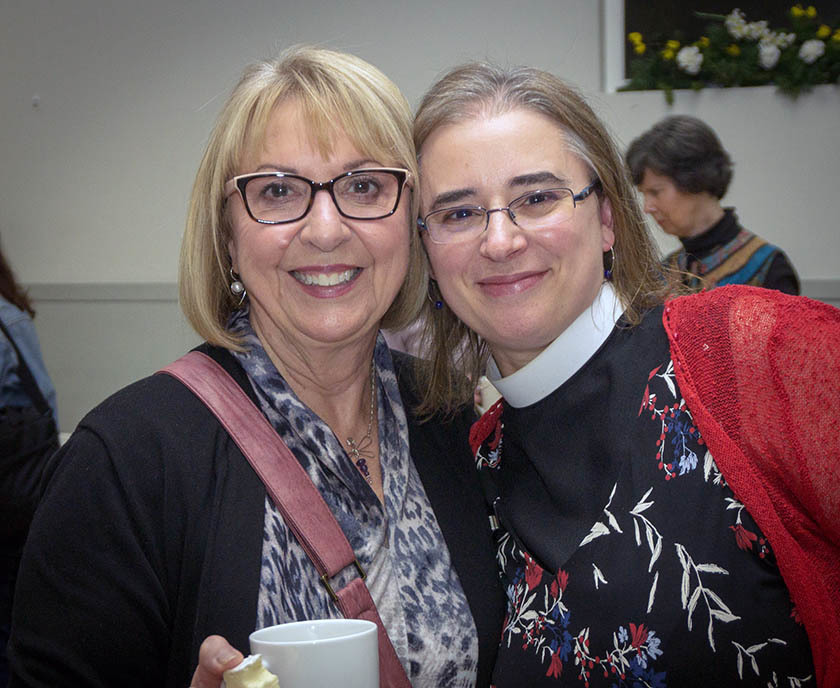 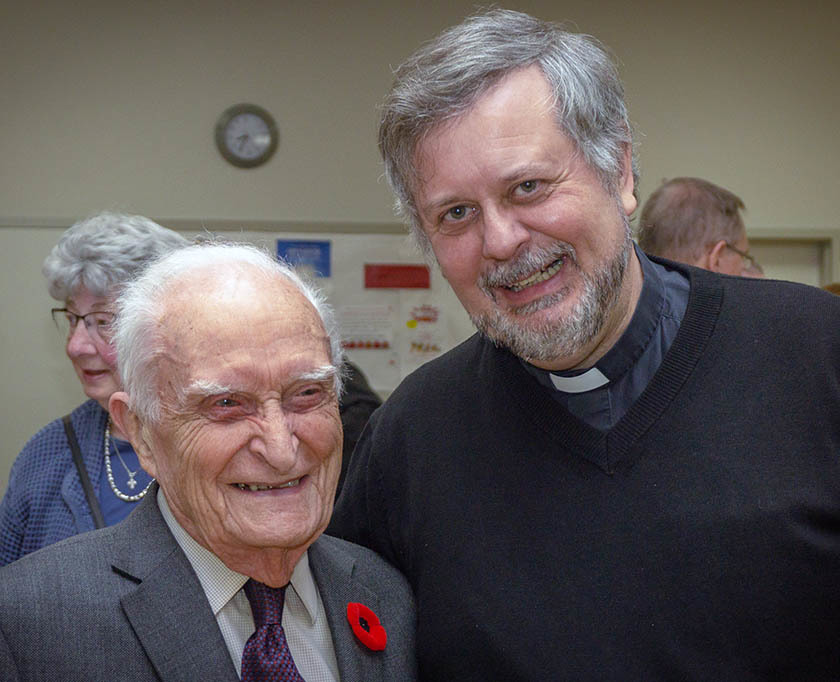 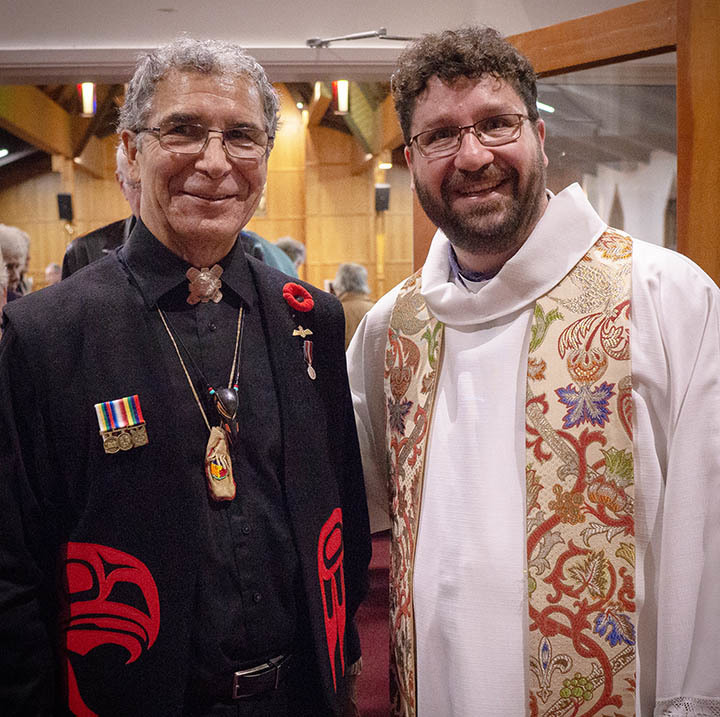 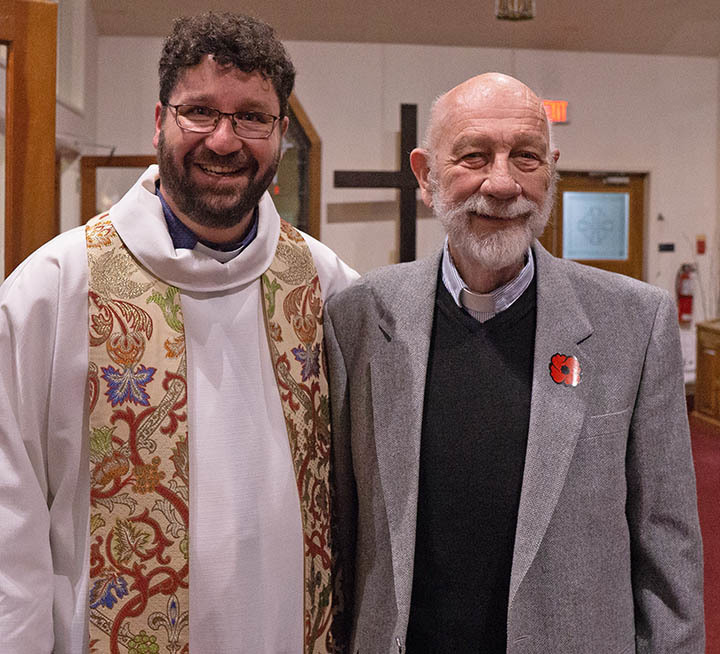 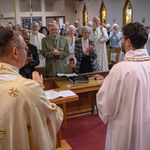 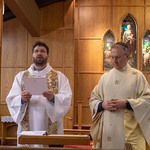 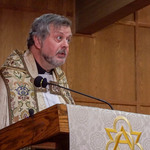 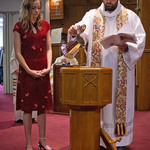 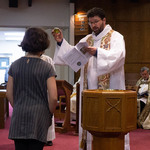 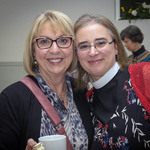 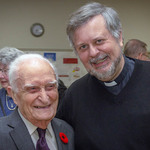 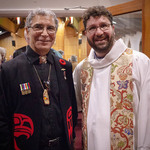 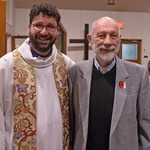 Approximately one hundred parishioners and well-wishers were at All Saints’, Ladner on Thursday November 7 to celebrate the Eucharist and witness the induction of the Reverend Fr. Robin Ruder-Celiz as the new rector of the parish.

A number of attendees were delayed in traffic including the Regional Archdeacon, the Venerable Richard Leggett who was ultimately unable to attend. The preacher, Archdeacon Kevin Hunt arrived with a quarter of an hour to spare. The evening got off to a bit of a rocky start when the lectern microphone failed. It could not be repaired in time.

At 7pm, organist Rod Asher struck the opening chords of the Processional/Opening Hymn, Blessed Feast of Blessed Martyr, and the assembled clergy, choir and wardens processed into the sanctuary.

The Executive Archdeacon of the Diocese of New Westminster, the Venerable Douglas Fenton officiated at the Induction and the Covenant in Ministry, also presiding at the Eucharist. During Archbishop Melissa Skelton’s November and December study leave, Archdeacon Fenton is Bishop’s Commissary.

The sermon preached by the Venerable Kevin Hunt, Rector of St. James’ and Archdeacon of Burrard was brief but comprehensive. In less than ten minutes, Fr. Kevin combined elements from all three readings. He transposed Paul’s epistle to the present day, suggesting that the letter could easily have been addressed to “God’s beloved in Ladner, called to be saints”.  And while Archdeacon Hunt did not envision the congregation having to endure the travails that had befallen Jeremiah, he did caution that All Saints’, Ladner might have its share of challenges in the years to come. He encouraged God’s beloved in Ladner to abide in Jesus’ love.

(A video of the sermon is available by accessing this link)

The liturgy continued with members of the parish presenting the Symbols of Ministry: Bible; prayer books; Canons of the diocese; keys to the buildings; Communion elements, bread and wine; water for baptism; and oils for healing and blessing. It was fitting that Robin’s daughter Charlotte was one of the presenters.

At the conclusion of the Covenant in Ministry when Archdeacon Fenton presented the Reverend Ruder-Celiz to his new flock, there was sustained applause.

The Reverend Paul Woerhle, Rector of St. Cuthbert, Delta and Regional Dean of Richmond/Delta gave a short address, welcoming Fr. Robin to the Deanery. He quipped that Robin and the parish will be a good fit, given that they both have hyphenated names: Ruder-Celiz & All-Saints.

Peter Bayley led the prayers of the people, after which the Eucharist was celebrated. The service concluded with an enthusiastic rendition of Guide Me O Thou Great Jehovah. A reception followed in the parish hall: food and fellowship in the Anglican tradition. Your scribe noted that a number of former All Saints’ clergy were in attendance including the Reverend Graham Witcher and recent interim priest-in-charge, the Reverend Liz Hamel.