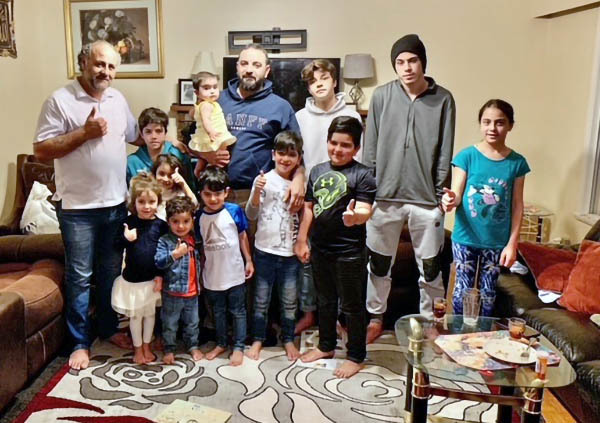 In November of 2020, The Arbutus Support Council [TASC], a group of refugee sponsors, were delighted to welcome Syrian newcomers, Hatem, his wife Najah, and their three sons and three daughters ranging in age from 3 to 15 years. They had arrived in Canada from Lebanon.

Eight years ago, Hatem, the oldest of 14 siblings along with his extended family and including younger brother Faisal, were caught up in the terror of the Syrian war that has led to the dislocation of millions of Syrian people. After bombs destroyed their village of Abou Hanaya near Hama, they fled their home and moved from village to village, to escape being caught in the crossfire between Syrian authorities’ and terrorists’ bombs. They lived for a time with 23 members of their family in a tent in the desert of Al Badyie trying desperately to protect their families, and eventually found their way across the border into Lebanon.

In 2016, following three years in Lebanon living under impoverished conditions, Faisal, the younger brother, his wife Riam and their three small sons were privately sponsored by TASC and came to Canada to begin their new life.

Life in Lebanon continued with great deprivation for Faisal’s oldest brother Hatem and his large family. They lived in a primitive shelter. Hatem and the older boys had little access to any paid work to augment the monthly financial support from the UN, and there was only minimal access to schooling for the children.  The separation of the two families was difficult: fraught with anxiety for one another and filled with hope for the opportunities that might arise in the future, they kept in touch through WhatsApp and set the goal of being reunited in Canada over the coming years.

In 2018, with the support of the Diocese of New Westminster: Anglican Church of Canada, TASC  began the work to sponsor Hatem. More donations were needed to support this second larger family, and it was with the help of the Parish of St. Mary Magdelene that TASC was successful in being able to provide tax receipts for this second round of donations.

After a number of disappointing delays for Hatem and his family, (thanks in part to the COVID pandemic), TASC witnessed the powerful reunification of these two brothers and their families at the airport.  And after isolating for 2 weeks in temporary housing, Hatem and his family moved into a nice rental home just a 10-minute walk from Faisal’s home.

And now, four months after arrival, all of the children, with the exception of the youngest, are in school and are quickly picking up English.  Important Canadian documents, cards and benefits have been obtained, bank accounts have been set up, and ongoing medical and dental care is underway. It is a great relief to them, and to TASC, that they are beginning to benefit from access in Canada to good education, health and dental care, and to support from sponsors and government. Formal English classes for the parents have been delayed due to COVID but interim measures are in place until face-to-face lessons return.

As expected, the two families are delighted to be reunited and enjoying living in close proximity. Out of necessity, they form a very large COVID ‘bubble’ of four adults and 11 children ranging in age from 8 months to 16 years. They gather in one another’s homes in support of establishing new lives in Canada, and few weeks go by without a birthday celebration for someone! TASC members accompany them to appointments, carry out behind the scene support activities, have regular meetings with them via Zoom, and are pleased to witness their growing independence in managing day-to-day activities.

Hatem, Faisal and their families as well as The Arbutus Support Council are extremely grateful for the assistance provided by the Diocese of New Westminster and the Parish of St. Mary Magdalene.

PHOTO:  The two brothers, Hatem (left) and Faisal (middle) along with their 11 children. Missing from the photo are Hatem’s wife Najah, and Faisal’s wife Riam. Photo: Submitted