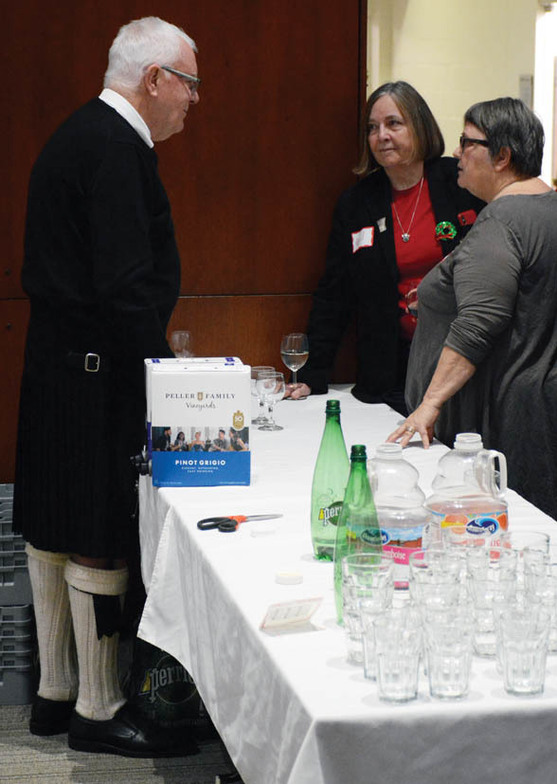 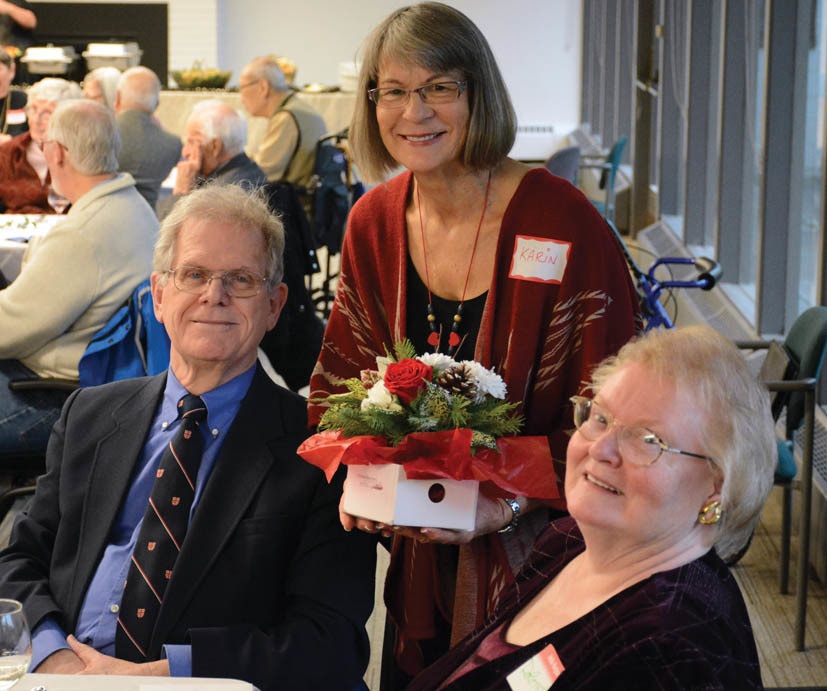 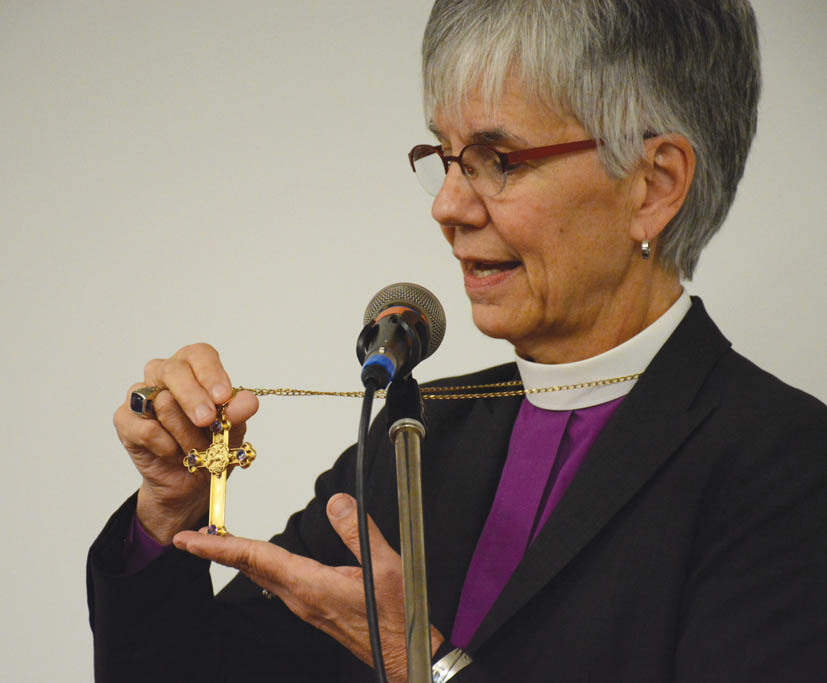 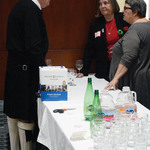 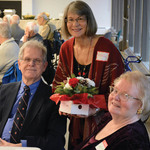 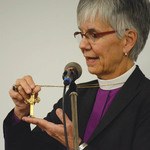 Tuesday, December 11, 2018, was the day that the retired clergy and spouses of the diocese met at the Synod Office for their annual Advent luncheon.

The Advent luncheon is the second scheduled event of the year as the retired clergy and spouses regularly meet in May, usually at a parish church for their spring get-together. This year, 2018, was the first year that the event was organized by the newly appointed Chaplains to the Retired Clergy and Spouses, the Reverends Karin Fulcher and Neil Gray. For the past several years the chaplains were Dorothy and the Reverend John Mash.

The guests at this “by-invitation” event began arriving soon after 11am and with the help of Synod staff and diocesan volunteer extraordinary, Jane Dittrich, the co-chaplains had everything well in hand in time for the more than 100 guests. The Reverend Keith Gilbert staffed the “bar”, Fr. Neil staffed the registration table and Deacon Karin kept an eye on the preparation for the meal.

The registration table was also the gathering place where the guests were asked to sign cards to be forwarded to retired clergy and spouses who had sent their regrets and were unable to attend.

After an hour of enthusiastic conversation, the cocktail time concluded and the guests proceeded into the Trendell Lounge to be seated. The Reverends Gray and Fulcher had a few announcements to make before prayers of thanks, the principal one of those being a “Thank-You” to Dorothy and John Marsh, the outgoing chaplains. Dorothy and John were presented with a floral tribute gift while their friends and peers applauded.

In keeping with tradition, the meal was prepared and served by The Banqueting Table caterers. This is a company that has evolved from a positive work program resident at West Vancouver Baptist church focused on bringing single mothers, victims of abuse and women who have been marginalized and unable to gain re-entry into the work force into a healthy work environment that provides skills and community. In recent years the main course has been ham, however for 2018, the Banqueting Table provided a full Christmas Turkey dinner with all the trimmings and it was fabulous.

Following the main course, hot drinks were available and the guests were encouraged to visit the desserts table. During dessert, the Reverends Fulcher and Gray asked that the Banqueting Table team take a break to come into the lounge to receive thanks from the group and they also asked that the Synod staff members present stand to be acknowledged and give a brief description of their ministries. There were special thanks given to Bill Siksay and Phil Colvin who work with the co-chaplains to stage this major diocesan event

The after meal speaker for the Advent version of the retired clergy and spouses lunch is Archbishop Skelton. In a brief, upbeat address, Her Grace touched on a number of topics. She spoke about the staffing of the Mission and Ministry Development Department (programme) now being complete with the 2018 additions of Director for Mission and Ministry Development, the Reverend Dr. Tellison Glover; Indigenous Justice Ministry Coordinator, Jerry Adams; Missioner for Christian Formation, the Reverend Jessica Schaap. These three have joined Missioner for Congregational Development, the Reverend Tasha Carrothers (Rev. Carrothers was ordained to the transitional diaconate, December 1, 2018) and a lot of good things are coming out of that department which will be of major benefit to our parishes.

Archbishop Skelton reflected on her election May 12, 2018, as Metropolitan of the Ecclesiastical Province of BC and Yukon and she spoke about the busy agenda for that entity, which includes the standardization of “Safe Church” and the formalization of agreements with the British Columbia and Yukon Anglican Youth Movement (BCYAYM).

The Archbishop mentioned the Topic 50th Anniversary commemorative edition project and she also spoke about the triennial General Synod coming to Vancouver July 9-16, 2018, and thanked the clergy and spouses for their ongoing ministry, their continuing commitment to, and involvement in parishes and organizations in the Church.

Near the conclusion of her address she drew the group’s attention to the pectoral cross that she was wearing. The cross was originally made for the third Bishop of the Diocese of New Westminster and second Metropolitan of the Province, the Most Reverend Adam de Pencier, OBE.

Following the address, the guests began to disperse, bidding farewell to their friends and colleagues and looking forward to the next time they will all meet again in May.

The Reverend Keith Gilbert, kilted, staffs the bar and speaks with the Reverends April Stanley and Helen Tervo

The Reverend Karin Fulcher presents a floral gift to former Chaplains of the Retired Clergy and Spouses of the Diocese of New Westminster, the Reverend John and Dorothy Mash

More images with captions available in a Photo Album at Anglican Conversation, the Facebook page of the Diocese of New Westminster